‘This is the form of Russian terror that will have to be countered for years to come’: IAN BIRRELL reports on life in newly liberated Kherson where these heroes (and your donations) help clear mines and killer booby traps

Thick flurries of snow fell in the forest as a Ukrainian man repeatedly shouted out ‘left, right, left, right’. His ten-strong team in pale-blue body armour followed his orders with metal detectors moving in synchronised style across the frozen ground.

Several spots were marked off where they had discovered cluster munitions, along with the sensor from a guided missile. Nearby, across an icy road and close to the market place of a small village, they had found a Russian rocket lying deep in mud.

Their work – clearing up deadly debris from Vladimir Putin’s invasion in an area liberated earlier this year – is cold, painstakingly slow and potentially dangerous.

After the team leader blew his whistle for a break, one mine sweeper admitted that she had wanted to join the army to fight for her country. ‘But this feels important also – to be clearing the ground for our children and for future generations,’ said Viktoria, 24. 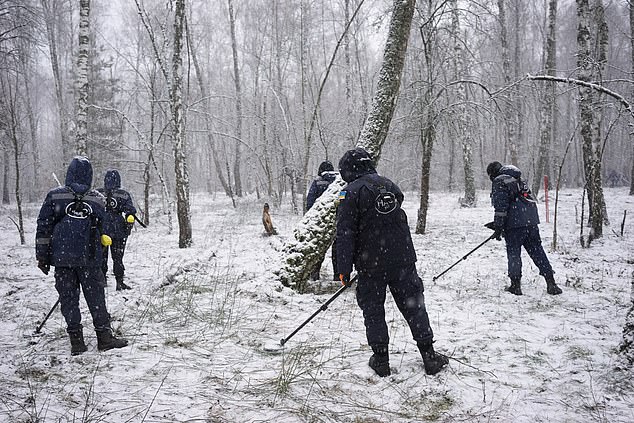 Halo Trust UkrainePictured The team of deminers are searching for the mines in the forest near Kyiv, Lukianivka village 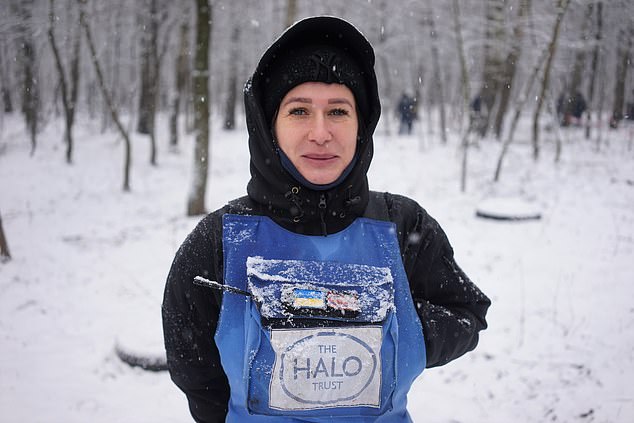 She is right. Such work is critical, as President Volodymyr Zelensky made clear last week when posthumously honouring four police officers blown up by Russian mines in newly freed Kherson.

‘This is the form of Russian terror that will have to be countered for years to come,’ Mr Zelensky declared, warning that 66,000 square miles of his nation – an area bigger than England and Wales – were still ‘dangerous’ despite being recaptured by Ukrainian forces.

‘Terrorists deliberately try to leave behind as many death traps as possible: buried landmines, tripwire mines, mined buildings, cars and infrastructure,’ he said.

The liberation of Kherson has once again highlighted the horror of Russia’s use of booby traps – with door handles, fridges and even children’s toys turned into lethal weapons designed to maim or murder Ukrainians returning to their city.

But there are also hundreds of battlefields across the country littered with missiles, mines and munitions. Many are in a volatile state, easily disturbed by locals collecting firewood or walking dogs. 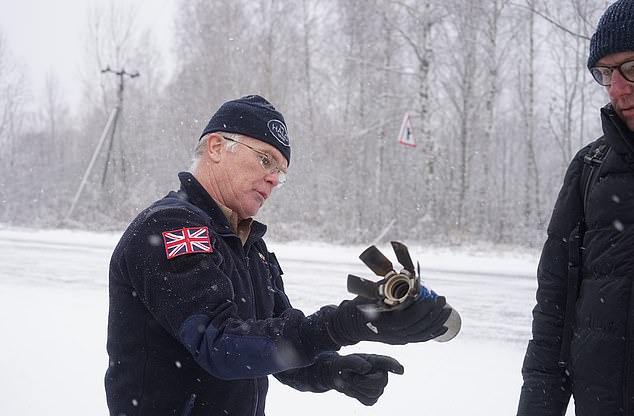 Halo, which goes into action after emergency services make the initial sweeps, has spent the money on detection equipment and on hiring scores of local people to comb through their fields and forests

Nearly 500 civilians are known to have been killed or injured by hidden or undetonated explosives, although experts fear the real figure is far higher. Little wonder that Mr Zelensky praised the outsiders helping to prevent more carnage.

Foremost among them is The Halo Trust, a British charity clearing mines and explosives around the world. It organised the teams I saw in Lukianivka, a small village 40 miles west of Kyiv that endured a month of Russian occupation.

Readers of Mail Newspapers and MailOnline have always shown immense generosity at times of crisis.

Calling upon that human spirit, we are supporting a huge push to raise money for refugees from Ukraine.

TO MAKE A DONATION ONLINE

To add Gift Aid to a donation – even one already made – complete an online form found here: mymail.co.uk/ukraine

Via bank transfer, please use these details:

TO MAKE A DONATION VIA TEXT

TO MAKE A DONATION VIA PHONE

Call 0300 12345 77 and follow the instructions to make your donation. A small fee will be deducted by the payment processing platforms when you pay by debit or credit card.

TO MAKE A DONATION VIA CHEQUE

TO MAKE A DONATION FROM THE US

You can donate via CAF America at: https://donations.cafamerica.org/mail-force/

US readers can donate to the appeal via a bank transfer to Associated Newspapers or by sending checks to dailymail.com HQ at 51 Astor Place (9th floor), New York, NY 10003.

Checks in the US need to be made out to ‘CAF America’ and have ‘Mail Force Ukraine Appeal’ in the memo.

These efforts have been aided by a £1.75 million donation from the Mail Force charity, which raised more than £12 million after a magnificent response from readers earlier this year to help Ukrainians fleeing, starving and suffering in wake of Putin’s cruel attack.

Halo, which goes into action after emergency services make the initial sweeps, has spent the money on detection equipment and on hiring scores of local people to comb through their fields and forests.

The teams I met included former cake makers, managers and shop workers. Some began mine clearance work in eastern Ukraine, where there has been conflict since 2014 after Putin stirred up separatist revolts and stole chunks of the Donbas region.

Yulia, 32, a former retailer, told me how a colleague was shot as they fled the start of Russia’s attack on Bakhmut, a Donbas town infamous as ‘the meat grinder’ after seeing so much death and destruction during the vicious and continuing battle for control.

Now she is clearing mines here while her brother fights on the front line. ‘I hate the Russians so much – we had such good lives before all this,’ she said.

This region was captured within days of the Russian invasion, then freed after fierce fighting a month later. As elsewhere, the Russians shot civilians, detained officials, tortured, looted and mined.

After liberation, doctors in nearby Brovary – where Halo’s Ukraine operations are based – warned they were seeing two patients a day with serious explosive injuries and that such ‘gifts of war’ would continue for years to come.

The dangers were highlighted in the summer when a couple went for a walk in woods near Kyiv to pick mushrooms, only for the 66-year-old woman to trip a wire linked to a grenade. She died on her way to hospital from hideous injuries.

‘She was lying on the ground and her legs below the knee were shattered to the bone and she had a wound across her stomach,’ said her husband Serhii. ‘Her face was covered in soot but she still had her glasses on. She was so brave.’

The area has signs near roads warning people to be wary of mines. Halo and other groups encourage citizens to take care: efforts that are even more crucial since the launch of Putin’s attacks on energy infrastructure, which have led more people to gather firewood to heat their homes.

Natalia Letushko, 42, the supply manager of a village supermarket with bullet holes in its window, said that locals learned the lethality of mines after a Russian soldier accidentally killed himself while fleeing in March. ‘He was blown up by his own mine, so we are very afraid and try not to go anywhere into the woods,’ she said.

Her husband Olexsandr was so traumatised by the terrors of occupation that he cannot work. Yet the family is unable to reach its vegetable allotment or go out foraging.

Some Mail Force donations offered more instant help for Ukraine – such as the delivery of 500,000 food boxes for families and elderly folks sheltering from bombardments in basements during the war’s first few months.

Other gifts have focused on the most disadvantaged and traumatised citizens, with £24,840 spent on building a sensory room for special needs children at the Inclusive Resource Centre in Solotvyno, beside the Romanian border.

‘Children love this room so much, especially the musical water bed – it’s the precious pearl of our centre,’ director Vira Stoika said. ‘It helps even very active children with autism became so calm.’

The donation through the Amar Foundation, set up by Baroness Emma Nicholson, helps 82 children using the centre – including 14 from families displaced by the war, many of whom fled to safer areas in western regions further from Russia. ‘They differ from our other children drastically since they are more stressed,’ Ms Stoika said.

One such family first fled Putin’s aggression in Donetsk eight years ago, then abandoned their new home near Kyiv after the full-scale invasion. ‘It seems war is following us wherever we go,’ said Anna, 40. ‘I hope we’ll be safe now here.’

Her daughter Bianka, 18, has phenylketonuria, an inherited disorder that leaves her lagging in development because she struggles to study and does not talk much, so a specialist unit with professional help is a big boost for her family. 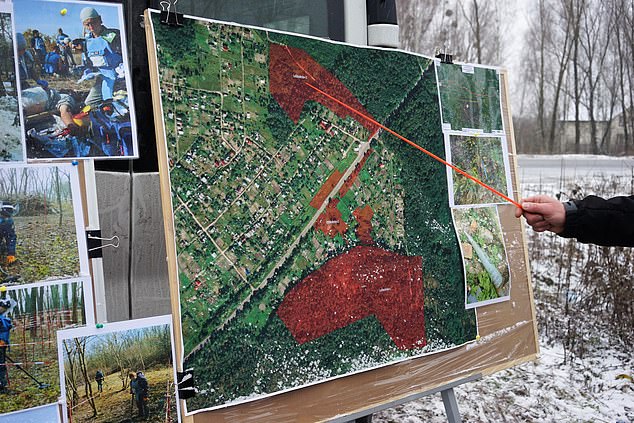 The mapping of territory to be cleaned of mines is pictured. President Volodymyr Zelensky made clear last week when posthumously honouring four police officers blown up by Russian mines in newly freed Kherson

The centre has generators – an added boon amid the exhausting power blackouts. ‘It’s always warm and bright,’ commented Anna. ‘As for the sensory room, I’ve never seen something like this.’

Another chunk of the Mail Force money went to help some of the 123,000 Ukrainians who arrived for sanctuary in the UK: the biggest influx of refugees from one country in a generation. Among the beneficiaries was the Refugee Council, which has supported almost 1,000 of the newcomers settle in Britain.

It helps them access local services such as schools, and organise community groups to assist integration. It also provides therapy.

‘Millions of Ukrainians have been displaced globally and thousands arrived in the UK in desperate need of safety and support.

‘Thanks to the tremendous support of Mail Force in response to our appeal, we’ve been able to design and mobilise a crisis programme to deliver vital services that respond to the specific needs of Ukrainian communities. We’re already seeing significant impact as our bespoke interventions provide life-changing help.’