New Delhi: More than 380 Indian doctors have died from COVID-19, the country's medical association has said, in a furious response to the government's admission that it had no figures on the toll among the medical profession.

The fatality rate for doctors is 10 times higher than among the general population, the Indian Medical Association (IMA) said, calling for doctors to be held in the same regard as soldiers who die on the battlefield. 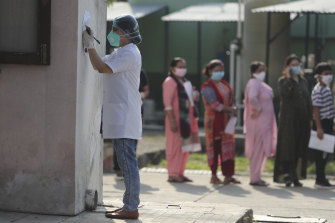 A doctor fills a form, as others wait in a queue for COVID-19 tests in Jammu, India this week. Credit:AP

The row erupted after Dr Harsh Vardhan, India's minister of health said he had no figures on doctors' deaths, days after India became only the second country to reach the grim milestone of 5 million coronavirus cases.

A statement from the IMA read: "It appears they are dispensable… To feign that this information doesn't merit the attention of the nation is abominable.

"Doctors and healthcare workers not only get infected in the line of national duty but also bring home the infection to their families, including children. To treat these martyrs indifferently is a national sacrilege."

The IMA has recorded the deaths of 382 doctors, more than any other country in the world. The youngest doctor to die was 27 years old and the oldest was 85. Tensions have run high between healthcare professionals and the Indian government since the onset of the COVID-19 pandemic.

The government of Narendra Modi, the Prime Minister, spends only $2.66 per citizen on healthcare, one of the lowest figures in the world.

Healthcare professionals say this lack of funding has led to shortages in the provision of personal protective equipment, leaving them vulnerable to infection. Pre-COVID-19, there was already a shortage of 600,000 doctors and 2 million nurses in India, and healthcare professionals are having to work for two weeks straight, without a break.

An insurance scheme set up for the families of the deceased has been hampered by bureaucratic problems and is allegedly not paying out, while healthcare professionals across India have held regular strikes over unpaid wages.

END_OF_DOCUMENT_TOKEN_TO_BE_REPLACED

END_OF_DOCUMENT_TOKEN_TO_BE_REPLACED
Recent Posts
We and our partners use cookies on this site to improve our service, perform analytics, personalize advertising, measure advertising performance, and remember website preferences.Ok