India has enforced a lockdown on public movement and communications in the disputed Kashmir region after the death of a top separatist leader.

Syed Ali Geelani died late on Wednesday at the age of 92 and was buried in a quiet funeral organised by the authorities under harsh restrictions, his son Naseem Geelani told the Associated Press.

“They snatched his body and forcibly buried him,” Mr Geelani said, as he explained the family had planned to bury his father at the main martyrs’ graveyard in Srinagar, the region’s main city, but police did not allow it.

“Nobody from the family was present for his burial,” he added. “We tried to resist, but they overpowered us and even scuffled with women.” 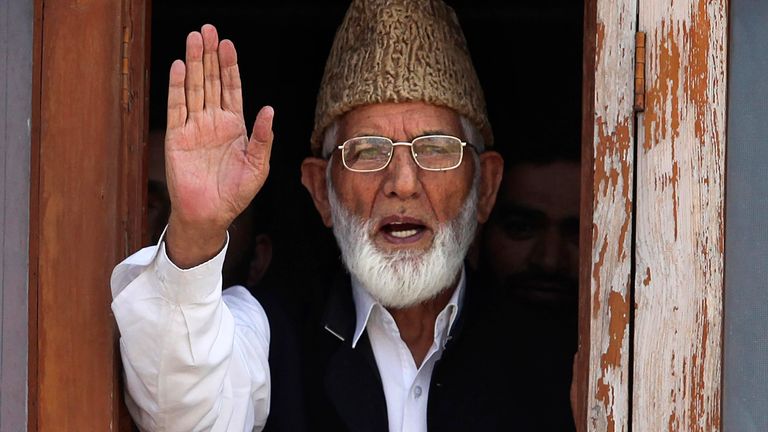 Armed police and soldiers patrolled the region as most Kashmiris remained inside their homes.

Government forces blocked roads and bridges with steel barricades and razor wire, and set up checkpoints across towns and villages in the Kashmir Valley.

Mr Geelani was the figurehead of Kashmir’s movement for the right to self-determination and argued for the merger of Kashmir with Pakistan.

He strongly opposed dialogue with New Delhi and became emblematic of Kashmir’s defiance against Indian rule.

He led a faction of the All Parties Hurriyat Conference which used civil disobedience to counter Indian rule, which Kashmiri rebels have fought against since 1989. Pakistan observed a day of official mourning and flags flew at half-mast on the orders of Prime Minister Imran Khan.

“Pakistan strongly condemns the barbaric act of snatching of the mortal remains of the iconic Kashmiri leader” by Indian police, the foreign ministry said in a statement.

It said the Indian government was “so afraid of Syed Geelani and what he stood for that they have now resorted to this inhuman act even after his passing away”.

“This shows the degree of callousness on part of the Occupation Forces,” the statement added.

Kashmir has been an area of contention between India and Pakistan, both of which claim the region for themselves but rule only in parts.

Tens of thousands of people have been killed in the conflict and India has sent the region into lockdown before, most notably after a move to revoke its semi-autonomy in 2019.