Instagram model apologises after racy ‘Chernobyl’ snap sparked outrage… but says she WASN’T really there and took the photos in a disused canteen 2,000 miles away

An under-fire Instagram model has apologised for posting half-naked pictures tagged from the death zone of nuclear wasteland Chernobyl.

But Veronika Rocheva, 23, has also revealed that she lied in suggesting that her racy pictures were shot in Pripyat, a ghost city in the doomed power station’s 19-mile exclusion area.

In fact, her lingerie and topless poses were taken 2,146 miles away at a disused canteen in Siberia, she said, adding that she ‘didn’t want to hurt or insult people’.

‘This was not in fact even Pripyat, we did the shoot in a deserted location in Novosibirsk,’ she confessed, saying she had put on the Instagram tag because the deserted location reminded her of the abandoned town.

The popularity of the HBO series about the 1986 disaster has sparked a surge in visits – and a backlash against suggestive selfies at the site.

Ms Rocheva’s picture, in which she poses half-naked wearing just an unzipped hazmat suit and a g-string, attracted particular attention. 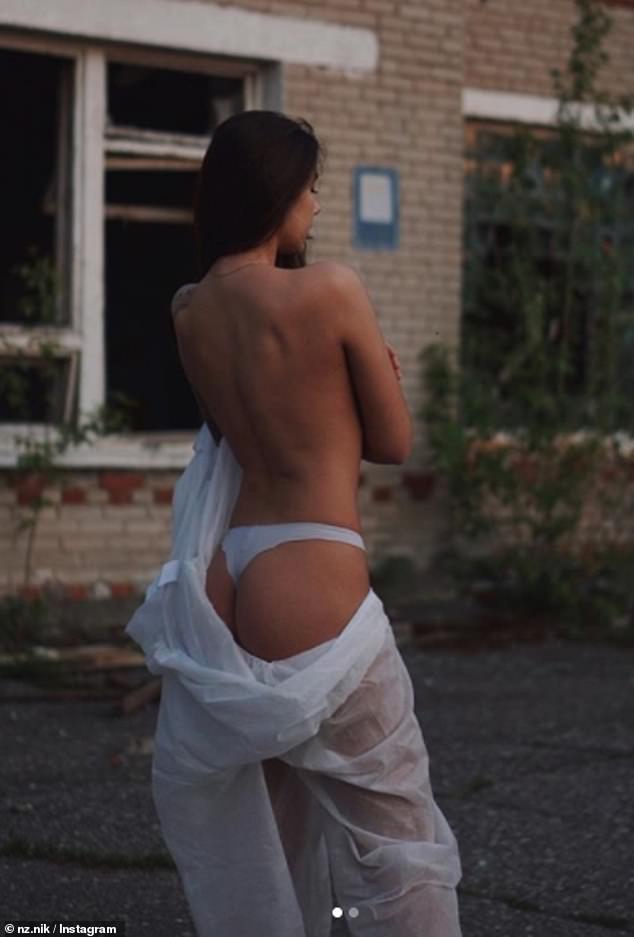 Instagram model Veronika Rocheva, 23, has apologised for posting half-naked pictures tagged from the death zone of nuclear wasteland Chernobyl such as this one 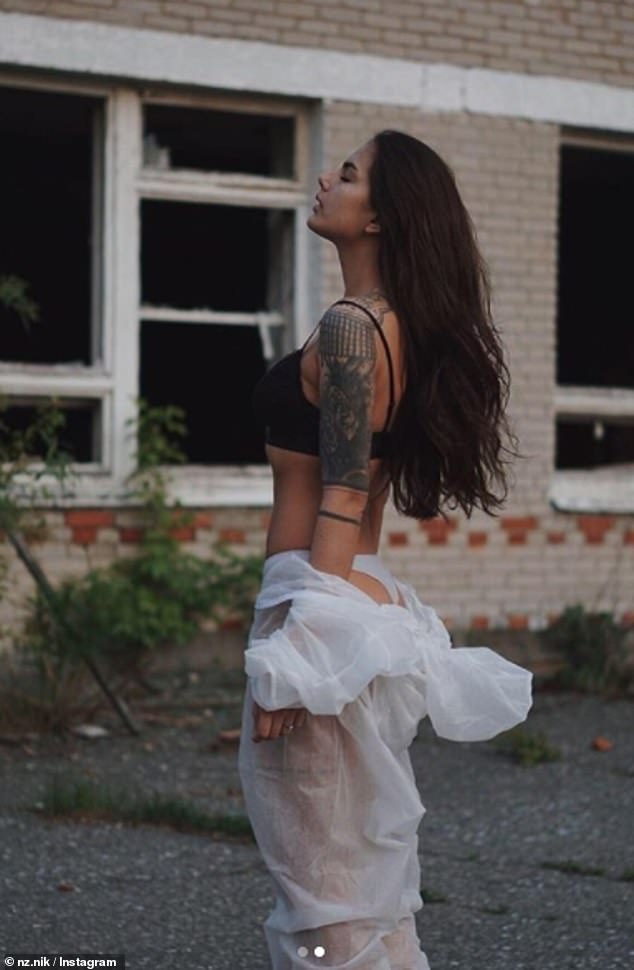 Veronika Rocheva said the lingerie and topless poses such as this one were taken 2,146 miles away at a disused canteen in Siberia

The model – unnamed until now – was hit by worldwide criticism and anger over the shoot, which she tagged as being close to the site of the explosion, which took place in Ukraine in what was then the Soviet Union.

A further picture showed her wearing a gas mask in what appeared to be a reference to the deadly radiation around the former nuclear plant. 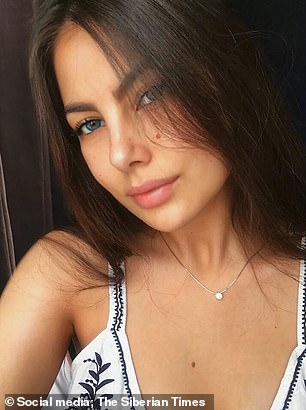 Veronika, pictured insisted she ‘didn’t want to hurt or insult people’ with the pictures

‘I don’t know why we decided to put this geotag,’ Veronika told the Russian publication life.ru.

‘It was all filmed at a deserted location in Novosibirsk.

‘It looked in a way similar to Pripyat and we just tagged the location as ‘Pripyat’.

‘We simply didn’t expect to get such outburst of negative reaction. We didn’t think about the consequences.’

The Instagram model said: ‘In fact I was doing a vlog about the environment when I got inspired by the HBO Chernobyl series.

‘This is what made us link the location we used for filming to Pripyat, they just looked so equally abandoned.

‘We thought it would be just our friends watching it, that was it.’

She said apologetically: ‘We didn’t want in any way to hurt or insult people that went through such a horrendous tragedy.

‘We pay deepest respect to the story of Chernobyl.’

The attention on her Instagram account since the scandal has more than trebled her follower count, to around 13,000. 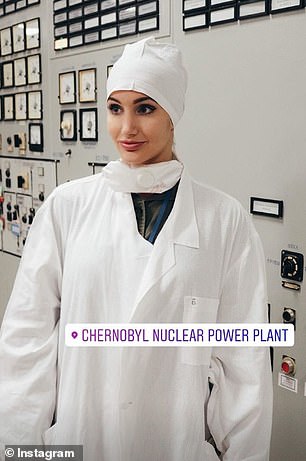 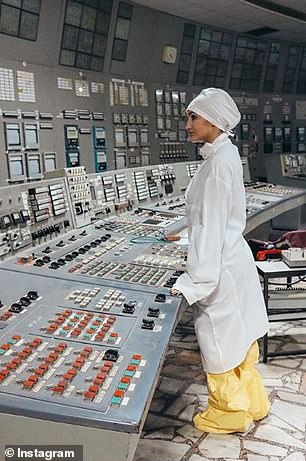 In pictures taken inside the exclusion zone, a different influencer geotagged her posts to show her followers where she was 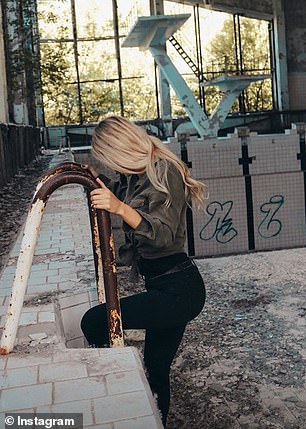 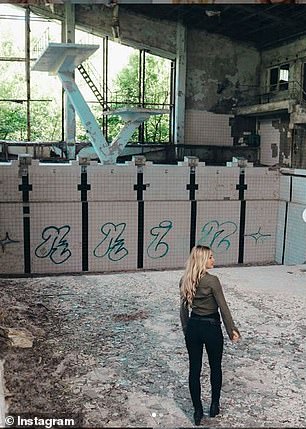 In another image, a different Instagram user climbs out from an empty, abandoned swimming pool in the exclusion zone

Instagram posts in the area have become so frequent that Craig Mazin, the writer and producer behind the popular miniseries, took to his Twitter to tell people to be respectful.

‘It’s wonderful that #ChernobylHBO has inspired a wave of tourism to the Zone of Exclusion,’ he said in a Tuesday tweet . ‘But yes, I’ve seen the photos going around.

‘If you visit, please remember that a terrible tragedy occurred there. Comport yourselves with respect for all who suffered and sacrificed.’

Tourism agencies also claim that they’ve seen a 30 to 40 per cent increase in the tours they’ve given in the area. 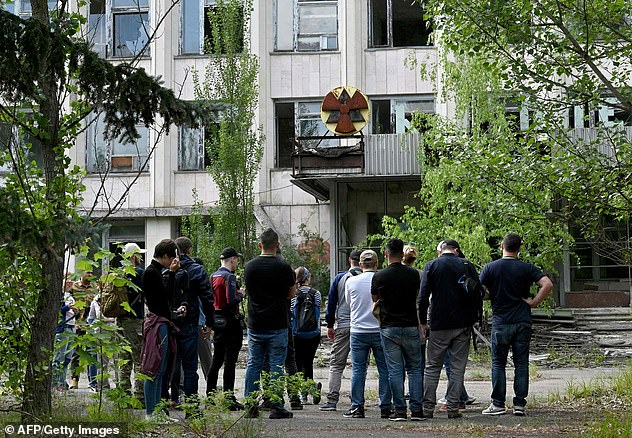 The popularity of the HBO series about Chernobyl has led to a wave of tourism, with agencies claiming that they’ve seen a 30 to 40 percent increase in the tours they’ve given to the exclusion zone (pictured, visitors in Pripyat earlier this month)

Pripyat became a ghost town in the early hours of of April 26, 1986 when an unexpected power surge caused a series of explosions which released radiation into the atmosphere more than 400 times more extreme than the Hiroshima atomic bomb.

The disaster was the equivalent to 500 nuclear bombs going off and more than 100,000 people had to flee their homes.

The death toll from the explosion is widely disputed, but listed as 4,000 by the United Nations.

However, up to 350,000 people weren’t evacuated from the surrounding areas for 36 hours after the initial explosion, and more than five million have lived in radiated land around the area in the 33 years since.

WHAT IS THE CHERNOBYL EXCLUSION ZONE?

In 1986 an explosion at the Chernobyl power plant in the former Soviet Union town of Pripyat leaked radioactive material into the environment.

The explosion was caused by a fire in one of the nuclear reactors and the surrounding area was evacuated as a result.

Around 116,000 people were permanently evacuated from the exclusion zone around the power plant, with villages and towns left to go to ruin.

While radiation levels in the region is still considered too high for humans to return, wildlife has moved back into the 1,600 square mile (4,300 square km) Chernobyl Exclusion Zone (CEZ) and is flourishing. 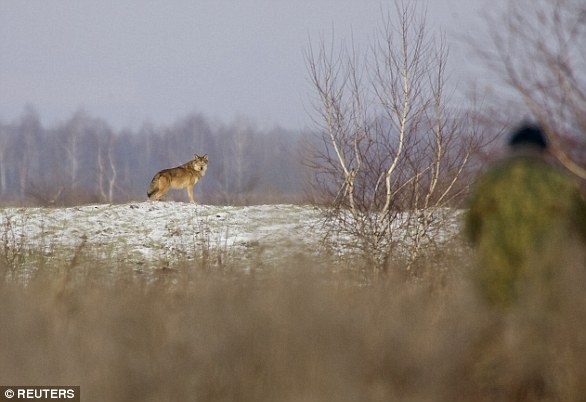 While radiation levels in the region is still considered too high for humans to return, animals such as wolves (pictured) have moved back into the area and is flourishing

Many argue that the region should be given over to the animals which have become established in the area – creating a radioactive protected wildlife reserve.

Studies of the animals and plants in the area around Chernobyl are now providing clues as to what the world would be like should humans suddenly disappear.

Scientists are monitoring the health of plants and animals in the exclusion area to see how they react to chronic radiation exposure.

Camera traps set up by researchers have captured a stunning array of local wildlife, including wolves, lynx, mouse, boars, deer, horses, and many others, as they wander through the area.

It shows that three decades on from the disaster, the area is far from being a wasteland. Instead life is thriving there.