London: Britain's Trade Secretary Liz Truss has fended off questions about Tony Abbott's "sexist", "homophobic" and "climate change-denying" record, insisting Australia's former prime minister has not been appointed to the UK's Board of Trade.

The awkward scenes – broadcast on British television – came as former Labor prime minister Kevin Rudd called on Boris Johnson's government to rethink the appointment, warning that an endorsement of Australia's "single most destructive politician" would send a negative message on the eve of the next round of global climate talks, which the UK is hosting. 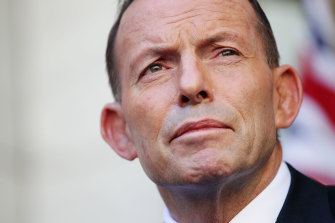 Truss was asked by British ITV journalist Harry Horton why someone who was widely viewed as "sexist, homophobic and a climate change-denier" was appropriate to represent Britain on the world stage.

Truss, who is also the Minister for Women and Equalities, said Abbott had done a very good job as prime minister in areas like trade.

"This is an irrelevant question because we have not yet announced the Board of Trade," she said.

"We will make an announcement on the Board of Trade in due course but I don't think my commenting on previous comments by someone else is remotely relevant."

Truss bristled at the suggestion the British-born former Australian PM would be negotiating trade deals on the UK's behalf as an appointee to the board.

"Let me be clear, it's my responsibility to negotiate trade deals around the world – no one else's – and I'm going to be getting the best deal for the UK," she said.

"Abbott is the single most destructive politician in modern Australian politics – in particular on climate change," Rudd told The Sydney Morning Herald and The Age. 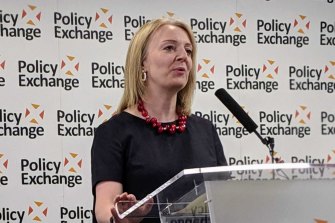 "If it were not for Abbott’s rank opportunism, and Neanderthal views on global warming, Australia would be 10 years into a legislated carbon price.

"Britain sends a negative message to the world when they are appointing a Trumpite on climate, when they are about to host the world's most significant global climate conference since Paris in 2015.

"Until this decision, the UK was rightfully regarded as progressive on climate policy a faction. I hope more sober minds in Westminster and Whitehall reflect on this deep contradiction in the days ahead."

Earlier this week, this masthead revealed that Abbott had been granted a special exemption from the Australian government’s ban on citizens travelling abroad during the coronavirus pandemic to fly to Europe. 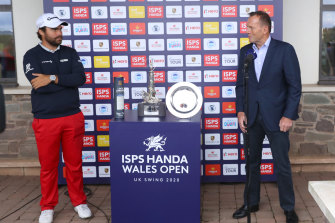 Abbott was photographed at a golfing tournament in Wales on Sunday, local time, and had breakfast with Truss in London on Tuesday, where the pair discussed Abbott's new role.

But several days after the nomination was revealed, the UK government has still not released a statement or confirmed the appointment, which was met with fierce opposition in Britain because of Abbott's previous remarks about climate change and women.

Neither the UK government nor Abbott have said if the role would be paid and if so how much.

Contacted for comment, a spokesman said, "Mr Abbott does not respond to personal abuse".

Mr Abbott has been in Italy this week and is due back in London next week to address the centre-right think tank Policy Exchange on the international response to the coronavirus pandemic.

He will also brief the House of Commons Foreign Affairs Committee on Tuesday about how the UK can strengthen multilateral organisations.

The most important news, analysis and insights delivered to your inbox at the start and end of each day. Sign up to The Sydney Morning Herald’s newsletter here,  The Age’s newsletter here, Brisbane Times‘ here and WAtoday’s here.

END_OF_DOCUMENT_TOKEN_TO_BE_REPLACED

END_OF_DOCUMENT_TOKEN_TO_BE_REPLACED
Recent Posts
We and our partners use cookies on this site to improve our service, perform analytics, personalize advertising, measure advertising performance, and remember website preferences.Ok