Home » ‘It was like time stood still’: Parents say delivering their own caesarean babies is life changing

‘It was like time stood still’: Parents say delivering their own caesarean babies is life changing

For Millie Olcay and Rea Eager, the moment they lifted their baby, Tom, from Millie’s body during his caesarean birth three weeks ago was so magical “it was like time stood still”.

As one of the first sets of parents to be offered the option of “parentally-assisted caesarean birth” in Australia, they were given the chance to take over during the operation to bring Tom into the world, and to lift him into it with their own hands. 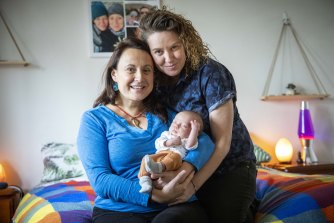 The couple had chosen their obstetrician, Peter Jurcevic, based in part on learning he supports mothers undergoing non-emergency caesarean births to bring their own baby out, and when Dr Jurcevic called to offer the chance for both women to help deliver Tom, “it was the happiest day ever, beside the birth day”, says Ms Eager.

“When he phoned a week before and said I’ve got this opportunity if you’re interested, I started crying as soon as he said it,” says Ms Olcay.

“I looked at Rea and she started crying. We hadn’t even answered him yet … but I wouldn’t want anything more than to have the chance to both put our hands on Tom as early as possible.”

Dr Jurcevic is a pioneer of parentally-assisted caesareans in Australia, and decided to commence them after noting the joy mothers had experienced while participating in “maternally-assisted” caesarean births, which he has been offering for three years.

It just felt like no one else was in the room. It was just us two having the perfect moment.

The parents are scrubbed to the same standards of hygiene as medical staff and also gloved and gowned to ensure sterility is maintained. After the baby is partially exposed, the parents’ hands are guided to it to deliver and carry the baby onto the mother’s chest, where cord-clamping is delayed.

“For us, sharing the power of that [birth] journey was so important because so much in the medical field is outside our control, particularly having IVF during the pandemic, Rea and I were not even able to be together at appointments [Ms Eager was “downstairs dialling in from the car park” each time],” said Ms Olcay.

“It was such a beautifully shared experience. The medical staff stepped back and it just felt like no one else was in the room. It was just us two having the perfect moment and in a really peaceful way,” said Ms Eager.

Ms Olcay and Ms Eager, who both work in Victoria’s Department of Education and Training, were Dr Jurcevic’s first patients to have the parentally assisted caesarean birth experience.

We know one of the biggest causes of trauma for women is actually having a caesarean, so let’s reduce that trauma.

He says it is important to him that women are as empowered as possible, whichever style of birth they have, and “to do what I can to make that surgical medical procedure enriching”.

“This is about trying to create a level of normalcy or connectivity to what is a medical intervention,” said Dr Jurcevic. He cannot understand why maternally and parentally assisted caesarean births are not offered more widely.

Midwifery professor Hannah Dahlen, of Western Sydney University, said parentally assisted caesareans originated in the UK and where there was no other option but a planned caesarean birth “then it’s a lovely option – and why shouldn’t couples feel this is a momentous event and be made as natural as possible, remembering you are still having major abdominal surgery”.

“We know one of the biggest causes of trauma for women is actually having a caesarean, so let’s reduce that trauma. We don’t want women to feel they’re any less mothers because their babies have to born by caesarean, no one wants that.”

President of the Royal Australian and New Zealand College of Obstetricians and Gynaecologists, Dr Vijay Roach, said it was important the medical profession and hospital system find ways to “bridge the gap women perceive in our understanding of their wishes and desires for birth”.

“This [parentally assisted caesareans] may be a way in which that could be achieved, but it requires further research to get a better understanding of the potential risks as well as the potential benefits”.

Another of Dr Jurcevic’s first patients to have parentally assisted caesarean birth, theatre nurse Annaliese Tulloch, whose baby Remington as born on March 30, said she and her husband Scott, an orthopedic surgeon, found the experience “so special, warm and loving – it was perfect and amazing”.

Ms Tulloch said that as a theatre nurse she had seen the typical way the procedure pans out, where “the baby is whipped away and the mother has to wait there – it’s not very warm”.

She said it pains her to know some women would be disappointed in themselves and feel like failures if they could not have a natural birth, and that, so long as those participating know they can cope with the surgical side, parentally assisted caesareans should be offered routinely: “They should be more widely … I think everyone can get involved, if they’re willing to get involved, then go for it.“