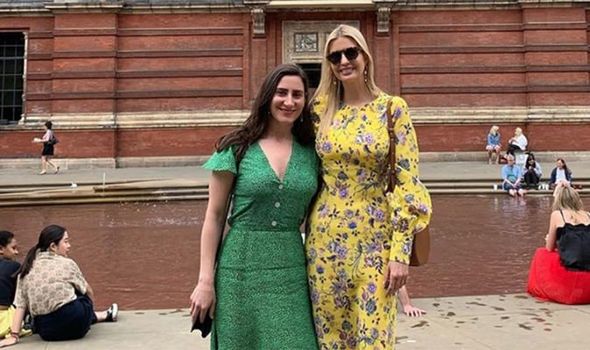 The 37-year-old was wearing a yellow floral dress in her Instagram shot and was clearly able to enjoy London’s heatwave. The US President will be accompanied by his wife Melania and four of his five children during the visit. The President will stay at Winfield House, which is the US Ambassador’s official resident. However some members of the family are expected to star at the Corinthia Hotel.

It is believed that the US leader has booked a floor of the Corinthia Hotel, which is located in Whitehall Place Westminster.

This morning the Queen, joined by the Prince of Wales and Duchess of Cornwall are due to officially welcome Trump at Buckingham Palace.

The president is due to receive a ceremonial welcome in the garden, inspecting the Guard of Honour, formed of Nijmegen Company Grenadier Guards.

It’s arranged for Royal Gun salutes to be fired in Green Park and at the Tower of London.