Home » World News » Jerry Falwell, Jr. was found intoxicated and bleeding at his home following a bombshell report alleging a years-long sexual affair between him, his wife, and another man

Jerry Falwell, Jr. was found intoxicated and bleeding at his home following a bombshell report alleging a years-long sexual affair between him, his wife, and another man 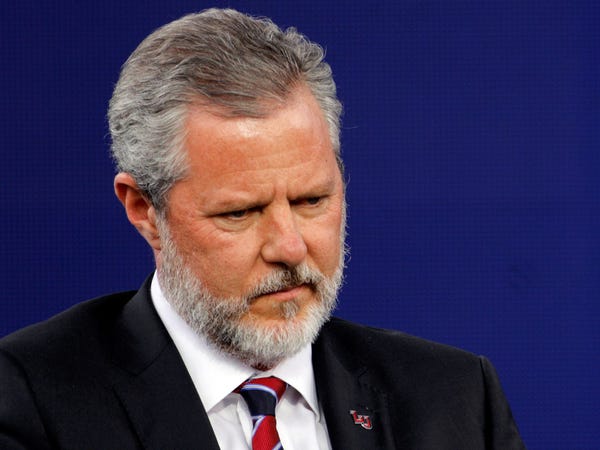 Jerry Falwell Jr. was found intoxicated and injured on August 30, a week after a bombshell report alleging a years-long sexual affair between him, his wife, and another man, according to emergency call records obtained by HuffPost.

Falwell's wife, Becki, called 911 after she got a call from her husband who she said was hurt.

She told the dispatcher that Falwell was bleeding a lot and had been drinking, but refused to give them much more information.

"The more I tell you the name, the more you're going to understand why we're not talking to you right now," Becki Falwell told the dispatcher, according to a transcript cited by HuffPost.

In a 1998 interview, the elder Jerry Falwell Sr. called alcohol the "the worst, most offensive drug in American society," and Liberty University prohibits students from drinking both on and off campus and also requires that students take random breath, blood, and urine tests to make sure they're sober.

Falwell Jr. refused to allow his wife to take him to the hospital, HuffPost reported.

Medical responders who arrived at Falwell's home reported multiple lacerations on his face. One responder also noted Falwell was slurring his speech and had hit his head on a trash can. Blood was found in the area near empty alcohol bottles, according to HuffPost.

The August 30 incident reportedly unfolded a week after a bombshell Reuters report in which Giancarlo Granda, a business partner of the Falwells, said he had engaged in a years-long affair with the couple during which he had sex with Becki as Jerry watched.

Falwell denied the claims through his lawyer, Michael Bowe, according to Reuters.

"Becki had an inappropriate personal relationship with this person, something in which I was not involved," Falwell said in a statement to the Washington Examiner.

Falwell resigned from his role as president of Liberty University in August.

END_OF_DOCUMENT_TOKEN_TO_BE_REPLACED

END_OF_DOCUMENT_TOKEN_TO_BE_REPLACED
Recent Posts
We and our partners use cookies on this site to improve our service, perform analytics, personalize advertising, measure advertising performance, and remember website preferences.Ok