A JILTED lover has burned her ex's £150 suit after he cheated on her with her SISTER when their newborn son died.

Sammy Reid, 28, was left devastated after discovering her partner of eight years, Dale Jones, had slept with her younger sister. 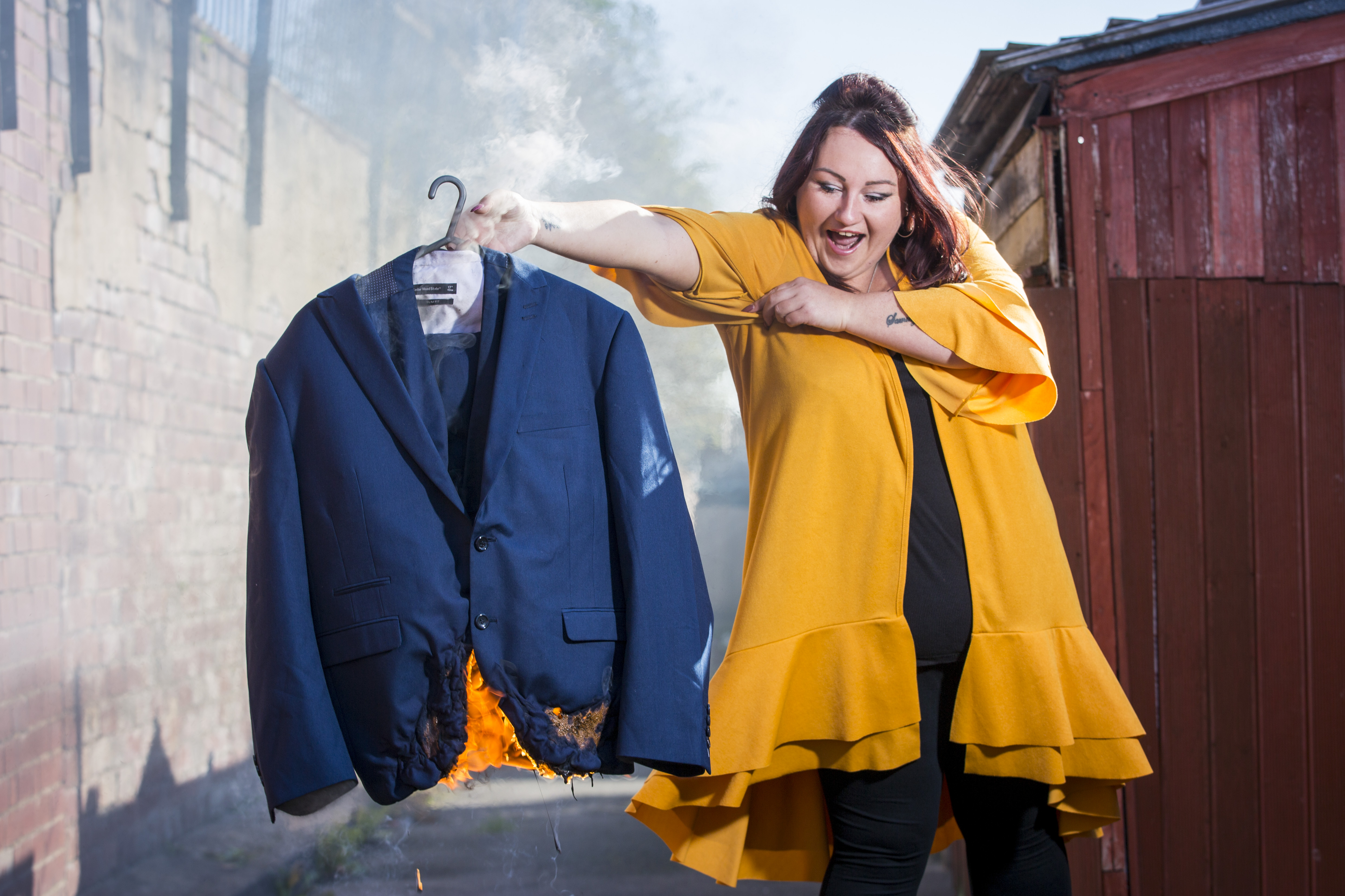 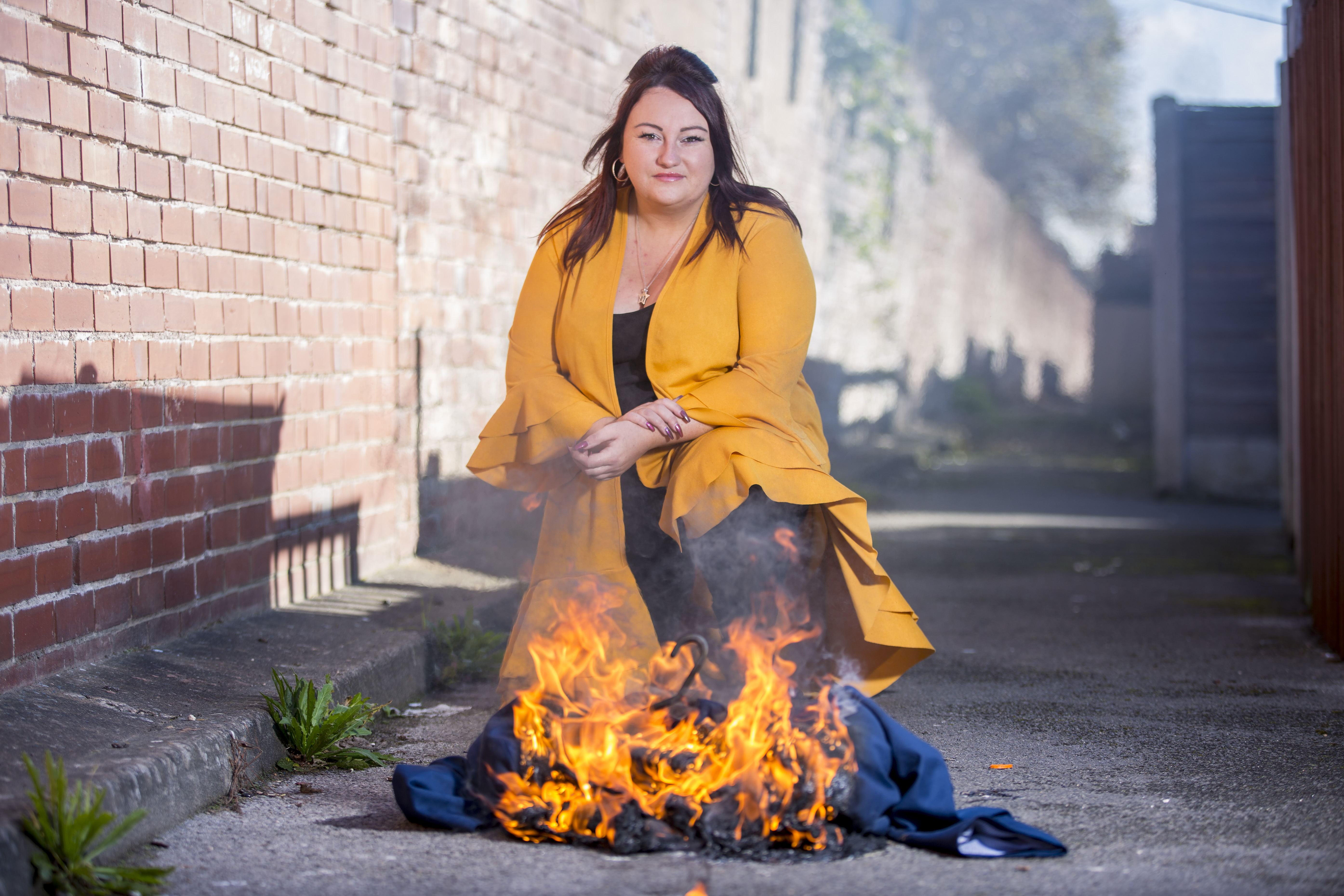 And the mum threatened to give the expensive four-piece blue suit away on social media – but instead decided to set it on fire.

Former cleaner Sammy said she had been left devastated after the 30-year-old admitted just last week that he had cheated on her during their relationship.

But grinning today, Sammy set the suit on fire – with the bad memories going up in smoke.

She told The Sun Online: "It felt pretty good – it was brilliant, actually.

Sammy, from Featherstone, West Yorks, said she had always suspected her partner was cheating on her – finally breaking off their eight year relationship in June this year.

But it was only last week during an argument that he admitted he had cheated on her – with her younger sister.

In a string of messages, he told her he had slept with her 25-year-old sister Charlie just after the couple's son Theo tragically die when he was less than a day old.

She said: "I have had to block him and my sister on everything – I was furious at them both.

“He admitted to me last week that they had got together. My sister was coming round to the house a lot when I was out – it all makes sense now. Theo died five years ago but it is still incredibly raw." 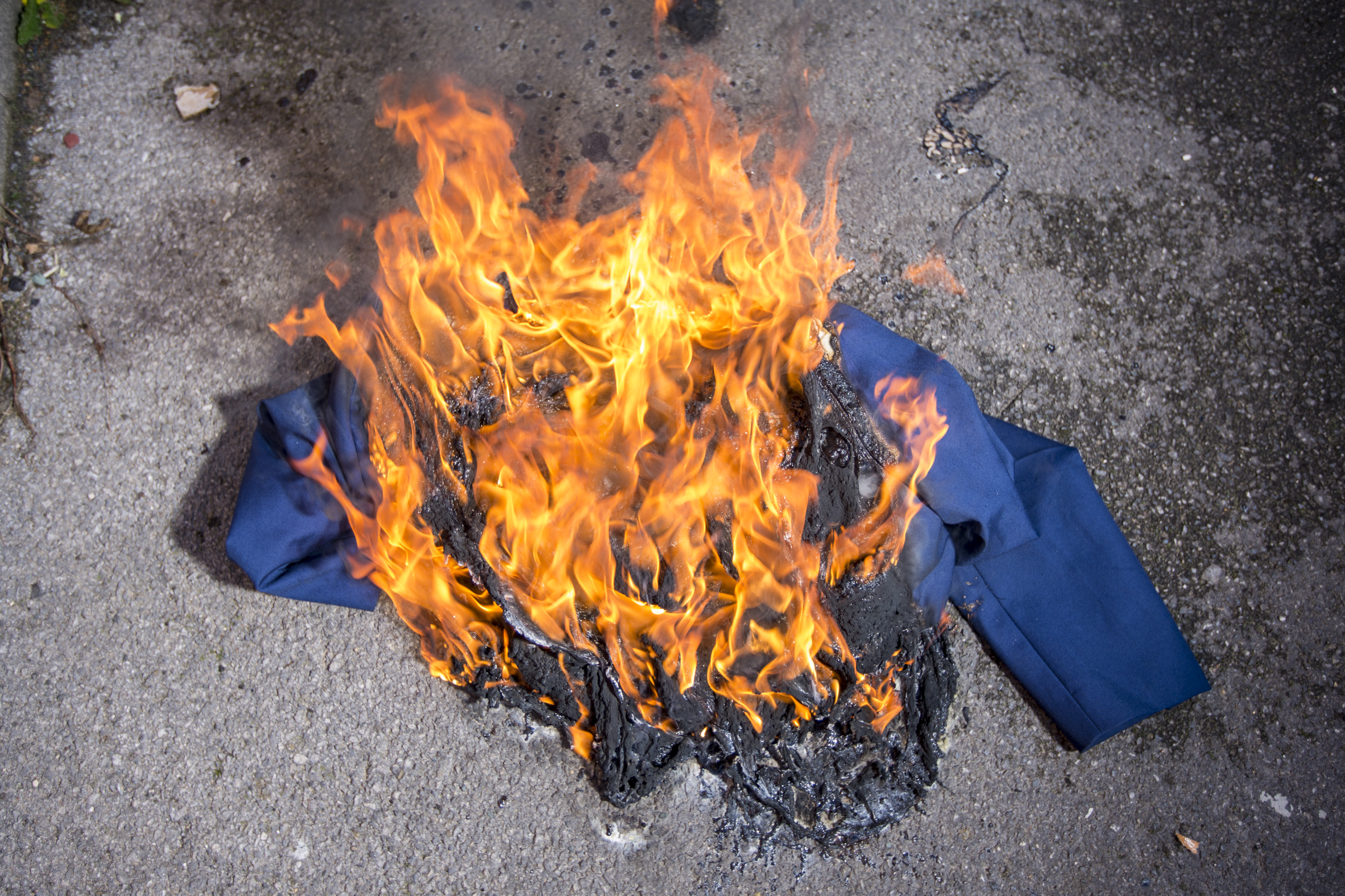 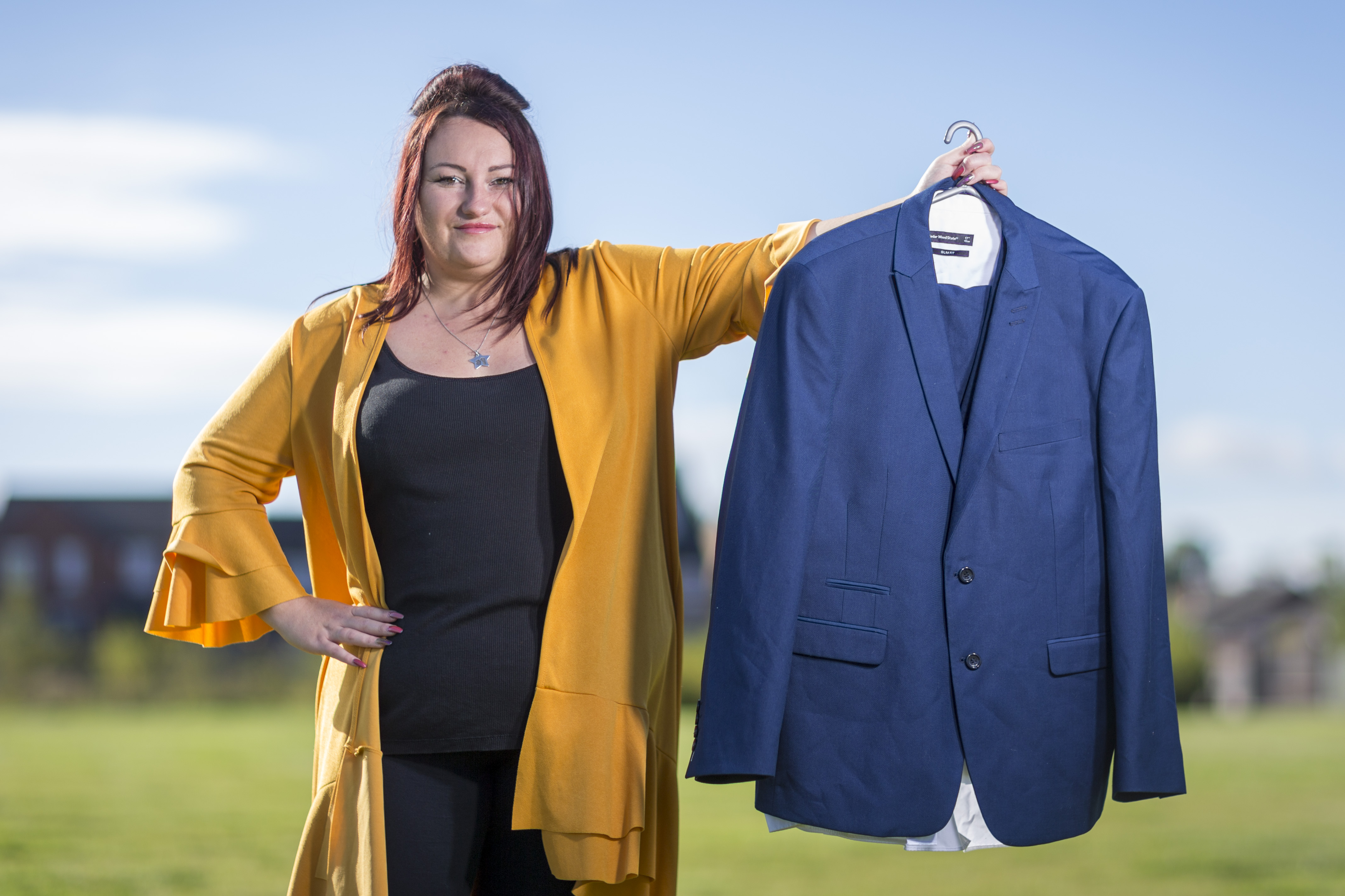 An investigation found little Theo was stillborn in 2015 after nursing staff made 32 mistakes which included medics getting lost inside a hospital and a birthing pool being overheated.

And Sammy vowed to move on from the relationship – starting with getting rid of the suit Dale wore to the christening of their daughter Darcy Bow Jones, who is now four.

Sammy had initially listed the £150 navy suit on Facebook buy and sell.

She told potential buyers: “Cost 150 quid worn twice. It’s free to whoever wants it before I set it on fire and post it thru my cheating partners new birds door.”

But after considering cutting it up, she finally decided on burning it.

Dale declined to comment when approached by the Sun Online.

It's not the first time jilted Brits have taken to social media to get rid of painful reminders of past relationships.

One woman listed her cheating husband's £195 gift with a brutal Gumtree advert.

Meanwhile another angry woman sold her boyfriend's £186 Xbox for £3 after finding out he had cheated on her while she was pregnant. 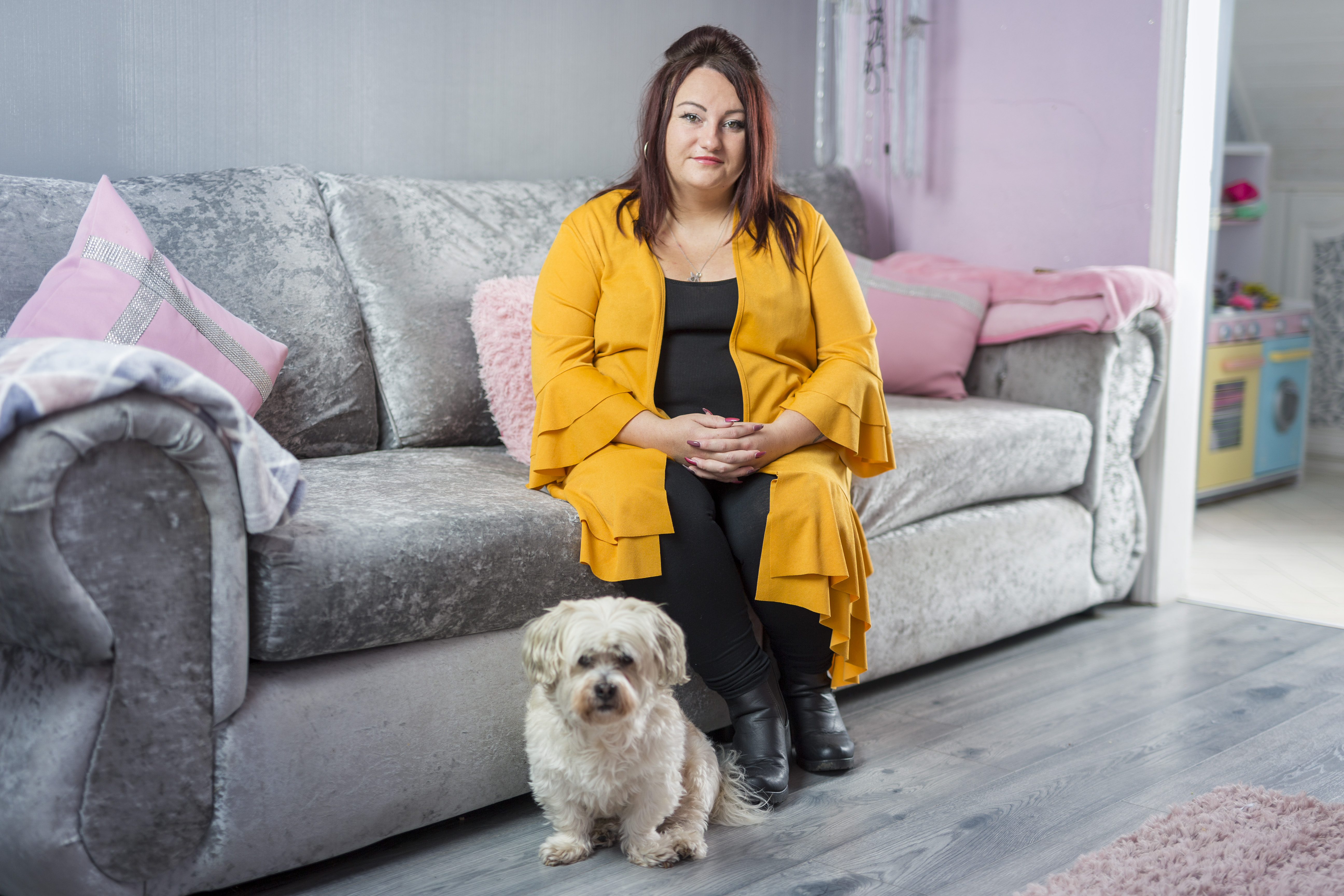 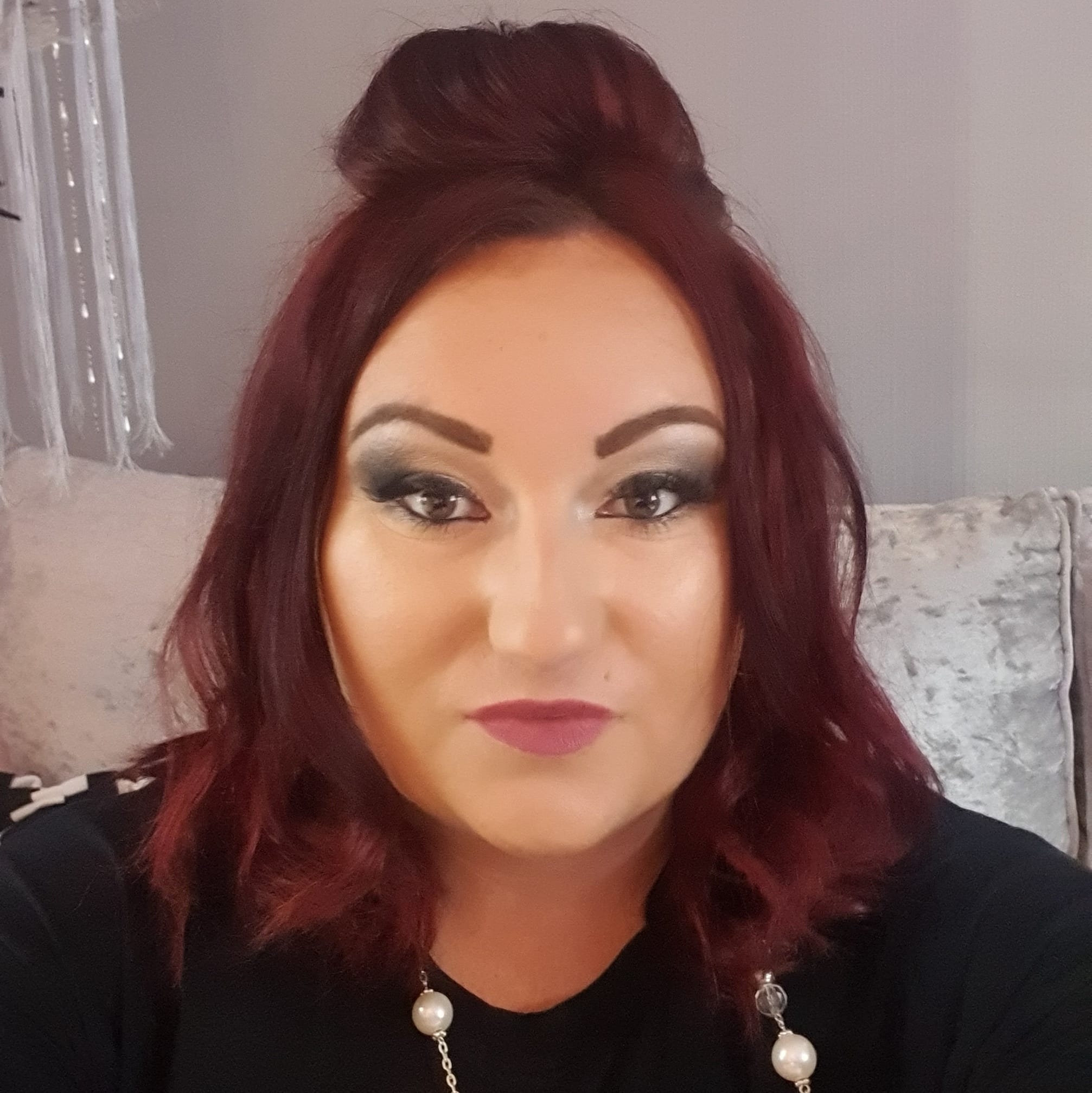 END_OF_DOCUMENT_TOKEN_TO_BE_REPLACED

Ariana Grande Reveals She Is Releasing New Album This Month

Ariana Grande wrote on Twitter on Wednesday that she’ll be releasing a new album this month. “i can’t wait to give u my album this month,” Grande tweeted. She has not shared any additional information about the upcoming album, which will be her sixth. Grande recently collaborated with Lady Gaga

END_OF_DOCUMENT_TOKEN_TO_BE_REPLACED

A 7.5-magnitude earthquake has been detected off the coast of Alaska, the United States Geological Survey says. The USGS said the earthquake occurred just before 5 p.m. ET on Monday, approximately 94 kilometres southeast of Sand Point. The magnitude of the earthquake was upgraded from 7.4 to 7.5 just after

END_OF_DOCUMENT_TOKEN_TO_BE_REPLACED
Recent Posts
We and our partners use cookies on this site to improve our service, perform analytics, personalize advertising, measure advertising performance, and remember website preferences.Ok