Johnny Depp appeared to look Amber Heard’s sister Whitney Henriquez straight in the eyes as she took the stand in the high-profile defamation trial between the feuding exes.

The move comes after weeks of Depp, 58, refusing to make eye contact with the Aquaman actress throughout their blockbuster trial because he vowed in 2016 that she would ‘never see his eyes again’.

Heard, 38, testified on Monday that she has tried to look her ex-husband in the eyes during their $100million defamation trial but he has avoided her gaze.

But when Heard’s sister Henriquez, 33, took the stand on Wednesday, Depp did look directly at her in a striking move.

During her testimony, Henriquez said that during Heard and Depp’s relationship, if the actor was drinking or using drugs, there was ‘almost always a fight’.

Henriquez told the court: ‘It seemed to oscillate pretty quickly. He’d be sober for a bit then fall off the wagon and it would go back and forth.’ 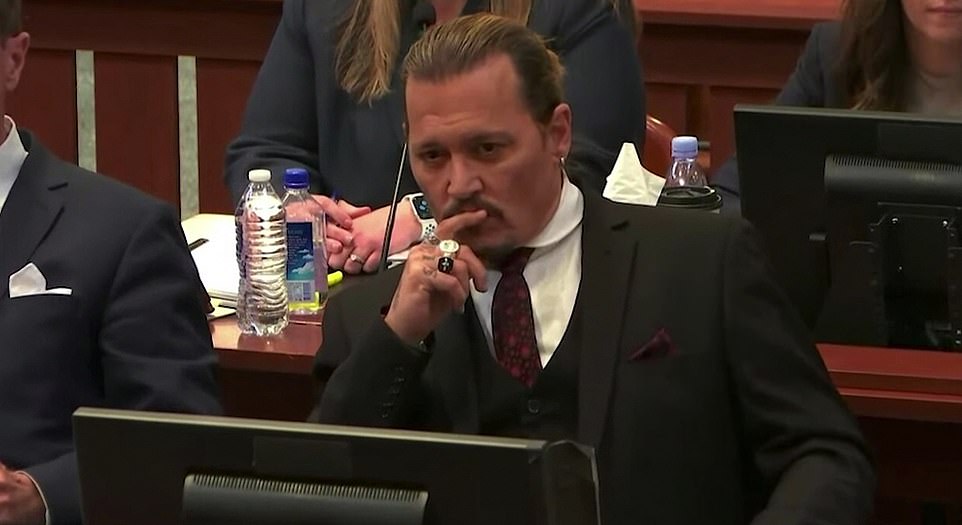 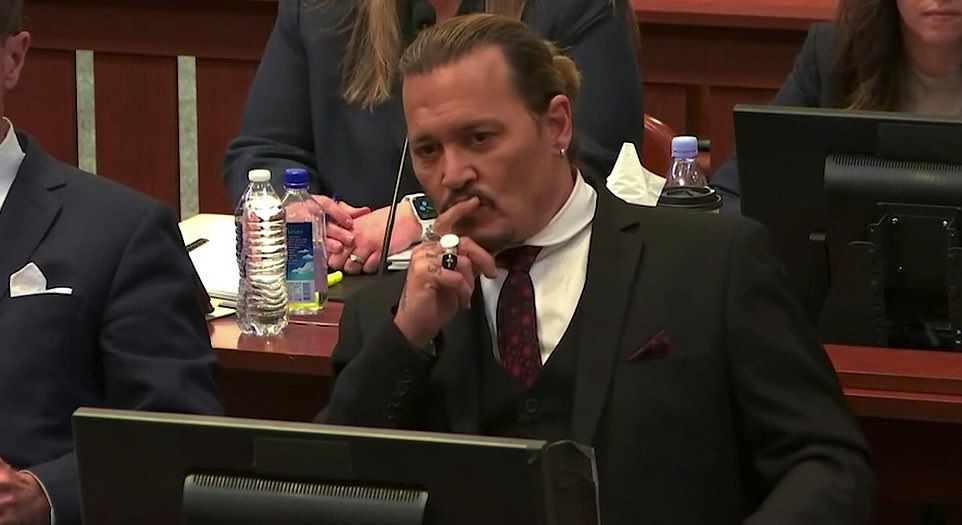 But when Heard’s sister Henriquez took the stand on Wednesday, Depp did look directly at her in a striking move 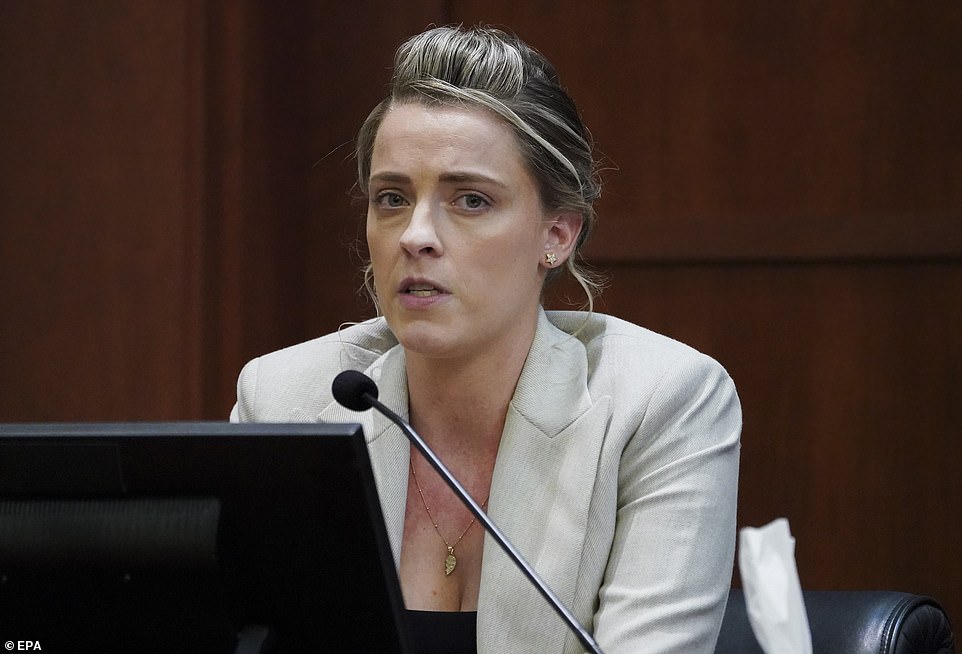 During her testimony, Henriquez said that during Heard and Depp’s relationship, if the actor was drinking or using drugs, there was ‘almost always a fight’

Asked to detail the change in her sister during the relationship, Henriquez said: ‘At first Amber was Amber, she was loud, fun, funny, she laughed a lot, was this happy, bright, fun, loving thing surrounded by friends. A progression took over such a long period of time. It was like watching a slow motion gunshot.

‘She stopped sleeping, not as loud, not as gregarious.’

Heard’s weight dropped to ‘100lbs soaking wet’ and she was ’emaciated, not sleeping, she developed a heart condition, her eyes were sunken in’.

Henriquez said that Depp became controlling over Heard’s clothing and, as they had the same stylist, he was ‘essentially controlling what she wore’ to events.

Depp complained about Heard doing movies especially if they had sex scenes and was ‘vehemently against her working at all’.

Depp on drugs was ‘almost unrecognizable’ from him when he was sober, Henriquez said.

When asked for example, she said: ‘Pardon my language, f**king cu**, f**king used up trash bag, slimy wh**e, saggy wh**e. F**king cunt was thrown out a bunch. Horrible things like that.’ 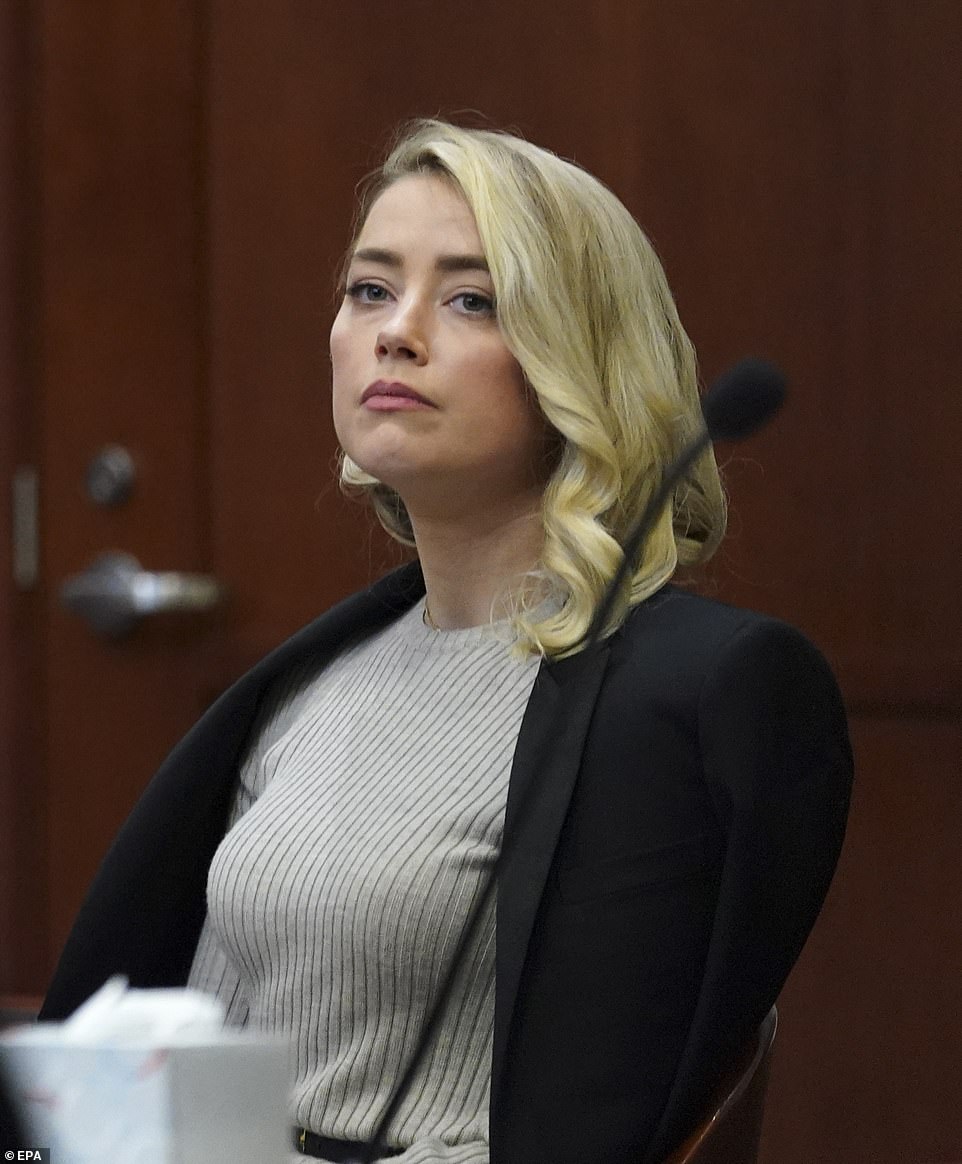 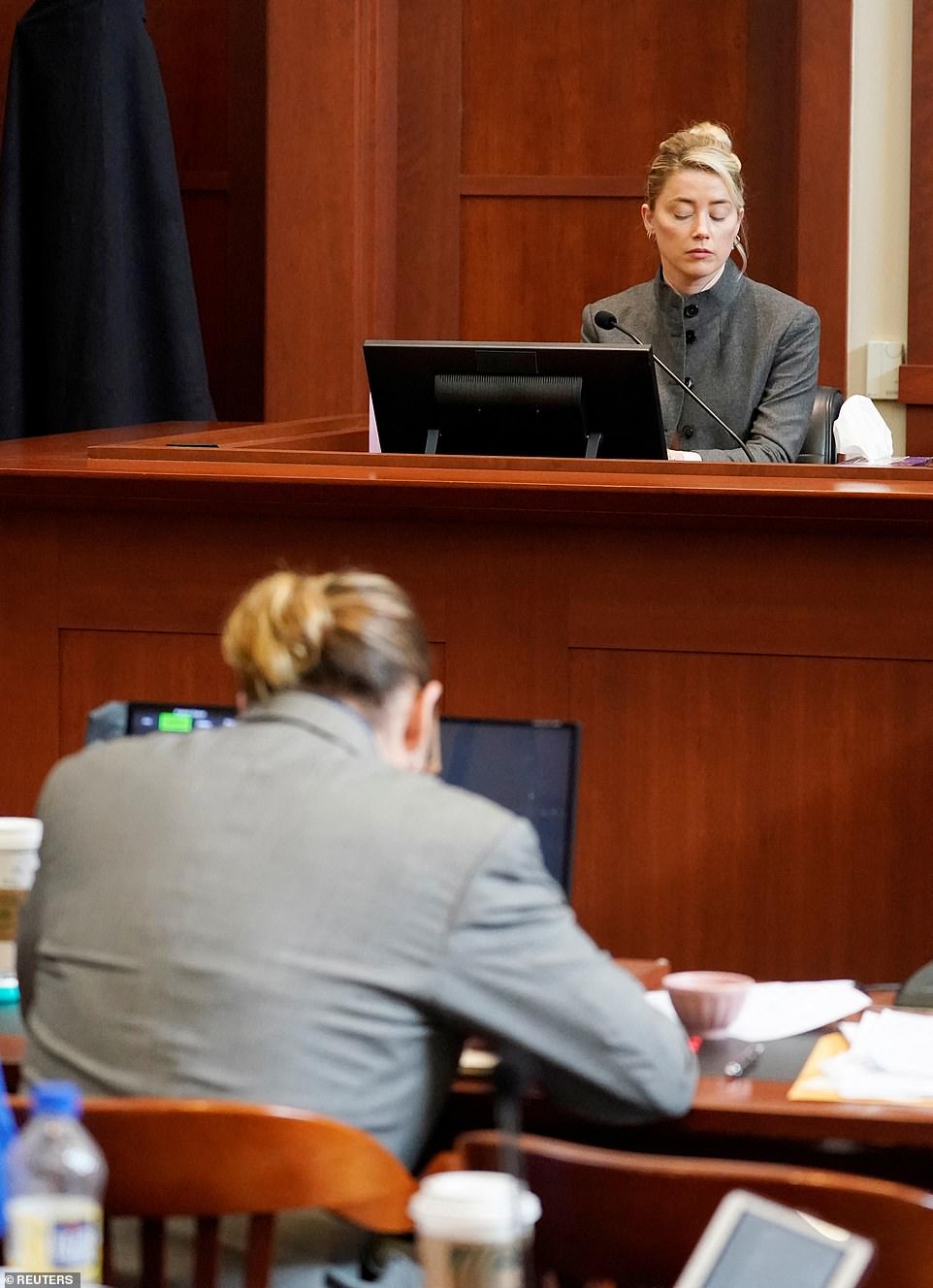 During her testimony, Depp looked at Henriquez – a striking difference to how he has avoided all eye contact with Heard.

Depp said in 2016 that Heard would never be able to look at him in the eyes again.

An audio recording was played to the Fairfax, Virginia, courthouse taken in a San Francisco hotel room in 2016.

It was taken after Heard had filed for divorce and obtained a restraining order against the Pirates of the Caribbean star.

In the recording, Heard tried to hug Depp but when he refused, she said: ‘Please I just want to hug you and say bye.’ 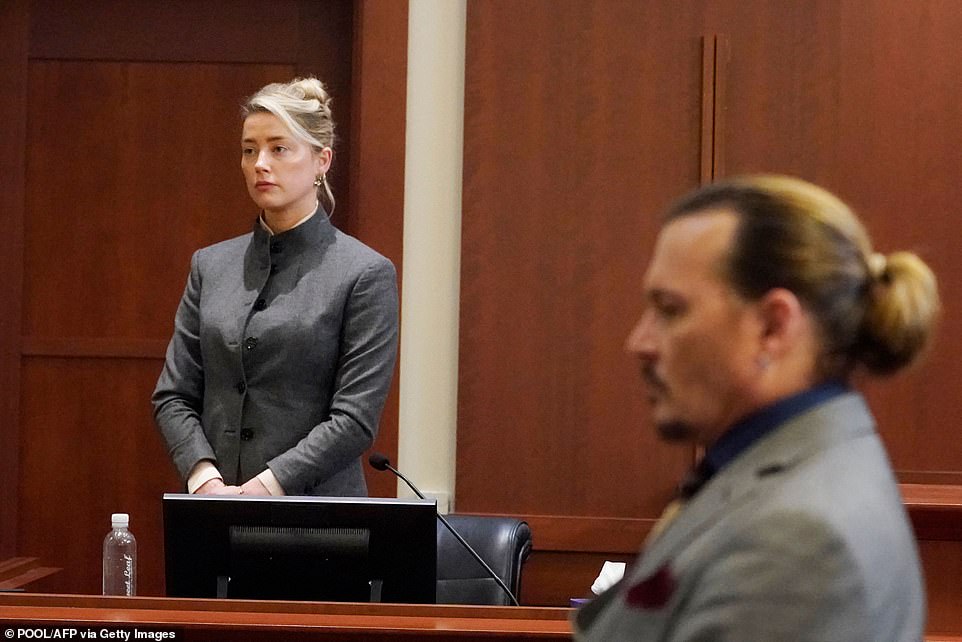 Johnny Depp has avoided making eye contact with Amber Heard because he vowed in 2016 that she would never see his eyes again, the court has heard 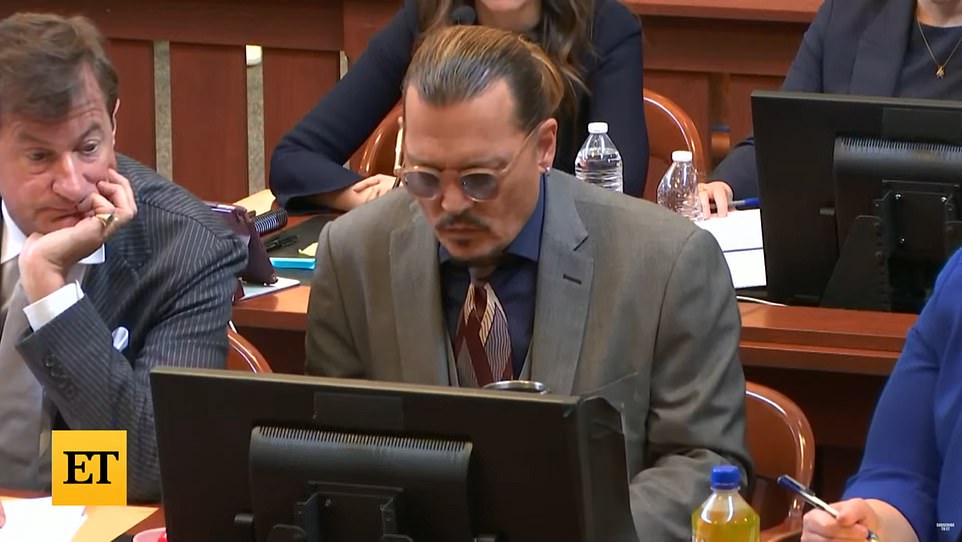 Depp has often fixed his gaze on his notepad, the computer in front of him or turned to talk to his legal team

In one tense moment, the pair did come face to face in a previous day in court, causing Heard to physically shudder.

The actress was walking off the stand after telling the courthouse how her ex-husband had sexually assaulted her with a liquor bottle and threatened to kill her in March 2015 in Australia.

At the same time, Depp, who is partially sighted, stood up and moved towards the Aquaman star.

Heard seemed to physically shudder and looked terrified, taking a step back as court officials immediately turned towards Depp and put their hands up, warning him to stay away.

The actor then turned away and appeared to shrug and smiled.

Heard was led to the side of the room by the court officials before Depp went through the rear door for a cigarette during the 15-minute recess. 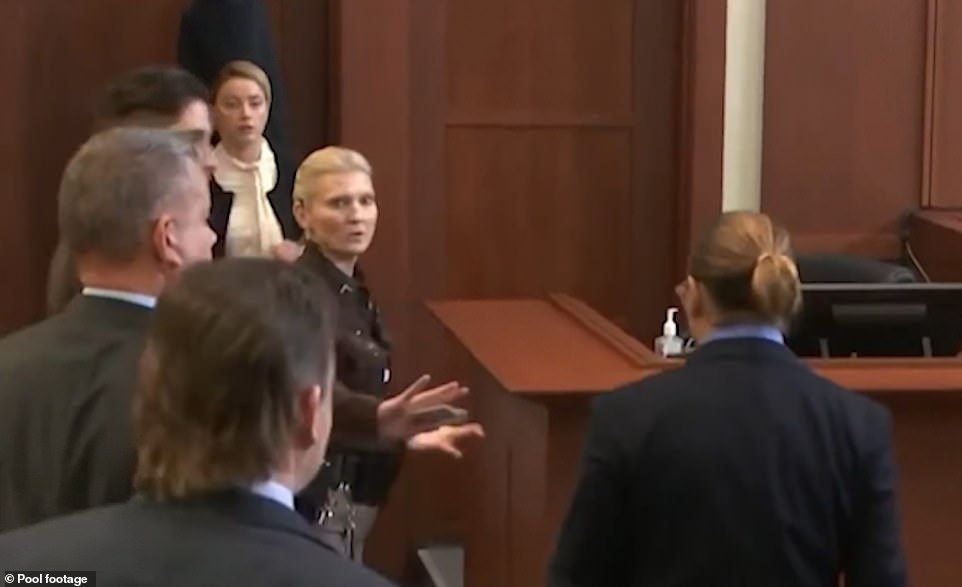 Johnny Depp and Amber Heard marry in a private civil ceremony at their LA home, four years after they met as co-stars on the set of The Rum Diary. The couple celebrate with a lavish reception on an idyllic private island in the Bahamas that Depp bought in 2004 for $3.6 million.

Heard breaches Australia’s biosecurity laws when she and Depp fail to declare their two Yorkshire terriers when they arrive Down Under on a private jet for the filming of Pirates of the Caribbean: Dead Men Tell No Tales. Heard admits falsifying quarantine documents and is placed on a $1,000 one-month good behavior bond.

Heard files for divorce after 15 months of marriage, citing irreconcilable differences. Four days later a judge issues a temporary restraining order against Depp over domestic violence allegations. Pictures of Heard’s alleged injuries hit the tabloids but the LAPD finds no evidence of a crime.

Depp and Heard reach a $7 million divorce settlement which the actress promises to give to charity. Their marriage was ‘intensely passionate and at times volatile, but always bound by love,’ the former lovers say in a statement. ‘There was never any intent of physical or emotional harm’.

The Washington Post publishes an op-ed by Heard, an ambassador for women’s rights at for the American Civil Liberties Union, urging support for women who suffer domestic violence. ‘Two years ago, I became a public figure representing domestic abuse, and I felt the full force of our culture’s wrath for women who speak out,’ reads the headline.

Despite not being named in the article, Depp files a $50 million defamation suit in Fairfax Circuit Court, Virginia saying it implied he was an abuser and got him fired from the Pirates of the Caribbean franchise. Depp dismisses Heard’s abuse allegations as a ‘hoax’ and claims he was actually the victim of her violence.

Heard countersues for $100 million, claiming vengeful Depp and his lawyer Adam Waldman targeted her with a vicious smear campaign, using media allies and internet trolls to amplify false stories about her and derail her acting career.

Depp faces an uphill battle to save his reputation after he loses a libel battle with a British tabloid that labeled him a ‘wife beater’. A judge in London’s rules that The Sun’s 2018 article was ‘substantially true’ and that the father-of-two had attacked Heard a dozen times, causing her to fear for her life on three occasions.

After lengthy delays due to the Covid pandemic, the former flames finally lock horns in Fairfax County, Virginia where the Washington Post servers that published the disputed op-ed are based. The trial is expected to last six to seven weeks and celebrities tipped to give evidence include James Franco, Paul Bettany and Ellen Barkin.