Last headhunters of the Konyak Naga

Last headhunters of the Konyak Naga: Fascinating portraits show elderly warriors who once collected their enemies’ skulls to show loyalty to their tribe in India

Fascinating portraits have captured the few remaining headhunters of ancient North East Indian tribe that used to behead people and display their body parts as trophies.

Striking images showed elderly Konyak Naga men posing with spears and machetes that they once used to hunt the heads of their enemies.

Another picture featured two men in traditional attire posing with a young girl. 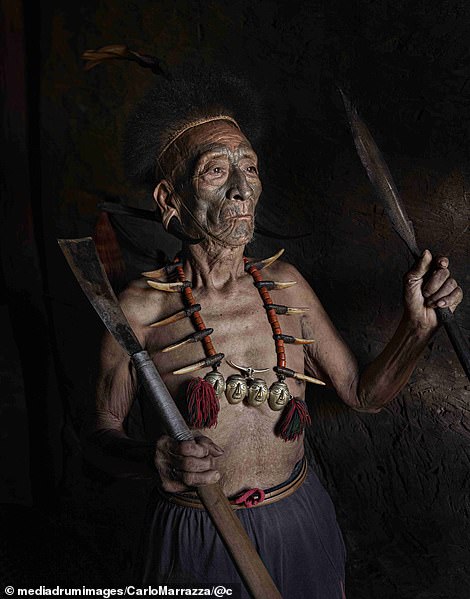 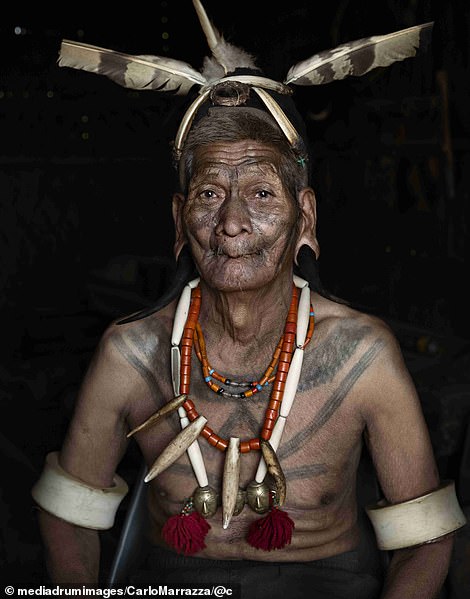 Konyak Naga are known for their headhunting, gunsmithing and iron smelting among other tradition. With tiger teeth and a necklace full of heads, these males (left and right) were a force to be reckoned with in his day 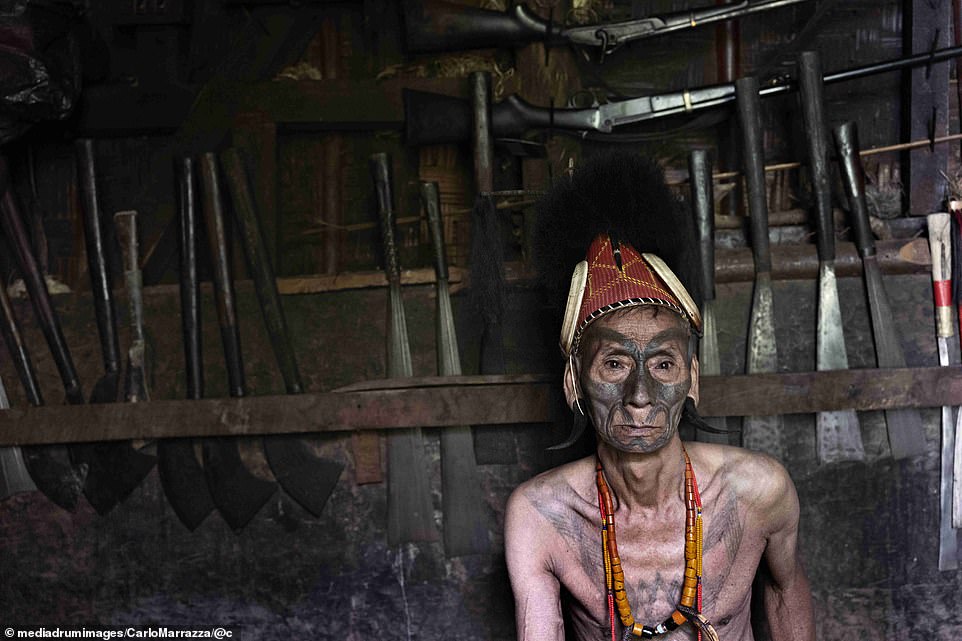 The Konyak’s are the largest tribe in Nagaland. Striking images showed elderly Konyak Naga men posing with spears and machetes that they once used to hunt the heads of their enemies 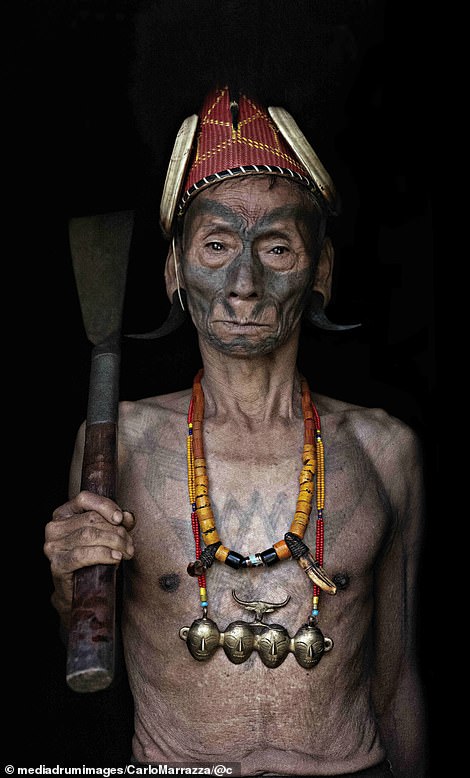 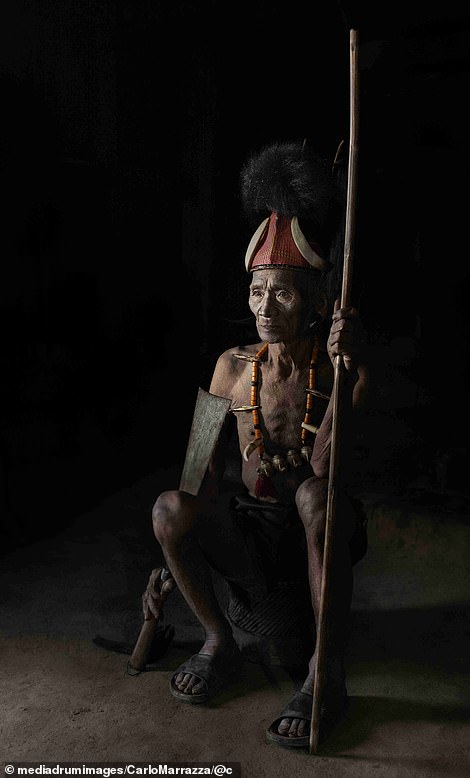 The amount of heads on this man’s, left, necklace signifies how many enemies he has killed off. The Konyak’s maintain a highly disciplined community life with strict adherence of responsibilities given for every villager

The men of the ancient head-hunting tribe are believed to more than 80 years old and are the last of their kind, with a population of around 320,000 worldwide.

The photos are courtesy of photographer, Carlo Marrazza, 62, from Brindisi, Italy, who used Leica cameras for the shoot. The snaps were taken across the villages Longwa and Hongphoi, in Nagaland, India.

The Konyak Naga used to collect their enemies’ skulls to show loyalty to their village, but the last trophy hunt was conducted in the 1960s. 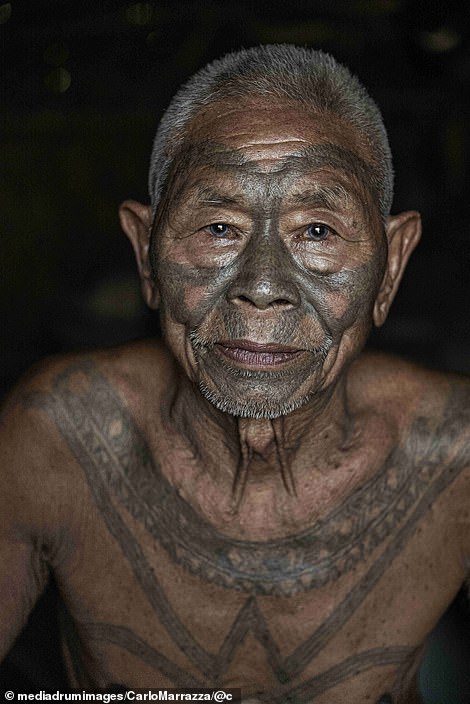 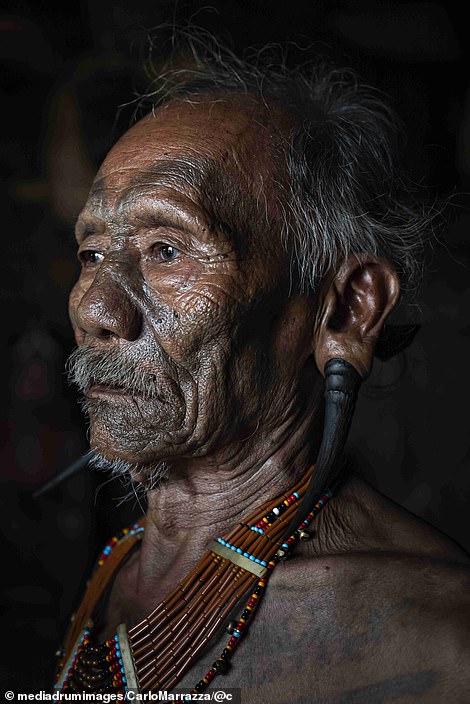 Facial tattoos were also earned for taking an enemies head. There are just seven of the headhunters left, but many old men who were kids during the last days of headhunting also try to keep the tradition alive by honouring it for visitors. 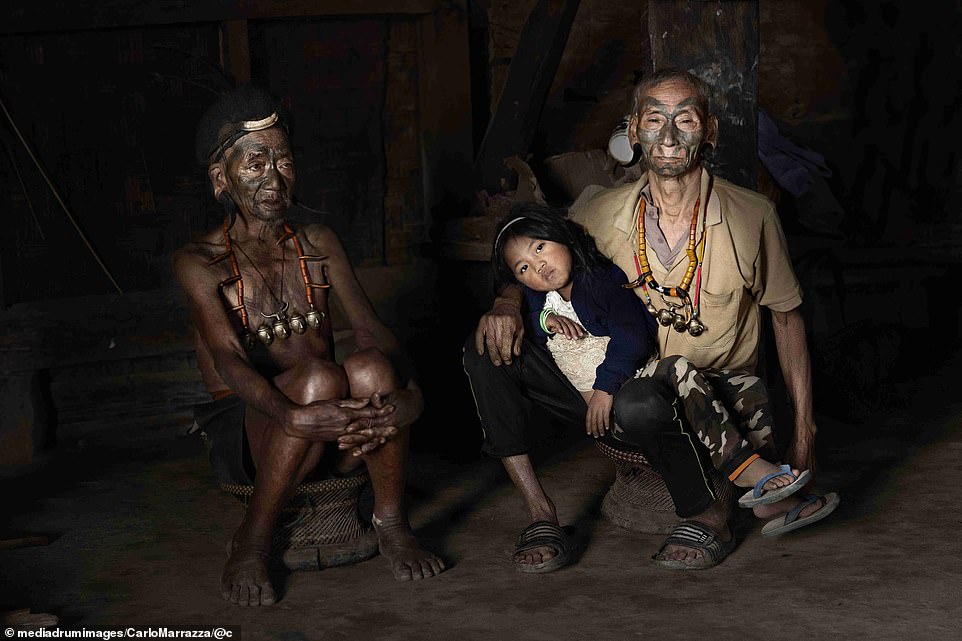 A charming cross-generational photo as a former decapitator poses with his granddaughter. Fascinating portraits have captured the few remaining headhunters of ancient North East Indian tribe that used to behead people and display their body parts as trophies 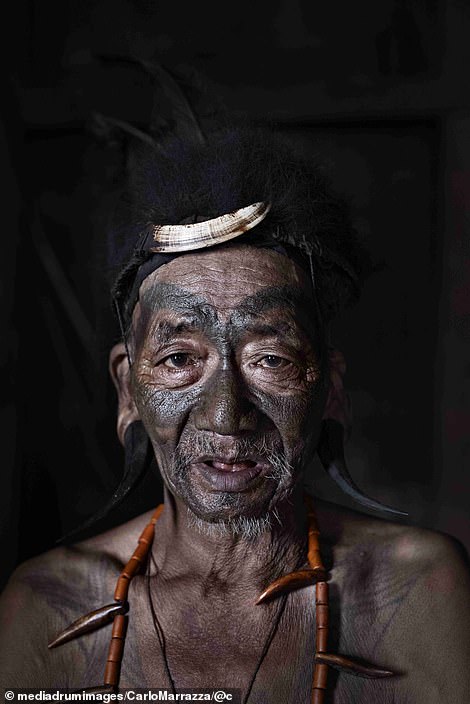 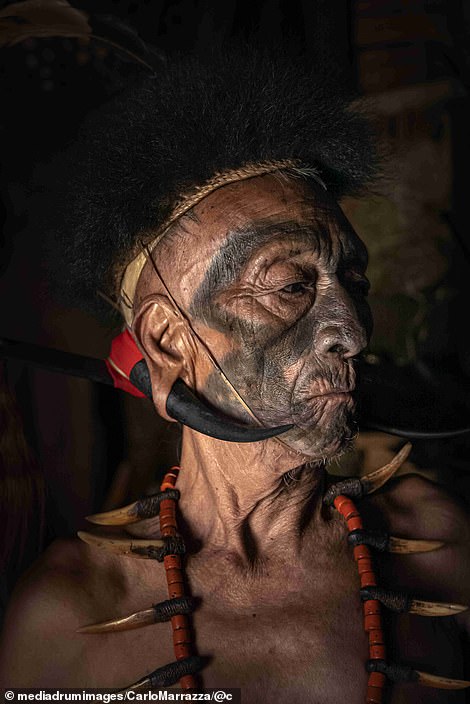 Despite having a population of over 320,000, an estimated 244,000 speak the traditional Sino-Tibetan language known as Konyak

‘One man I photographed with an extremely expressive face had four heads on his necklace, which meant he had killed at least four enemies,’ said Carlo.

‘It was very interesting to learn that the skulls, by order of the government all had to be permanently buried. They sometimes reappear in some traditional festivals not frequented by foreigners.

‘These men are all over eighty but are held in high regard by the other Konyaks. The headhunting was to show loyalty to the village Angh [a king]. Preserving the tradition dies with these men, and will probably no longer exist in the next ten years. 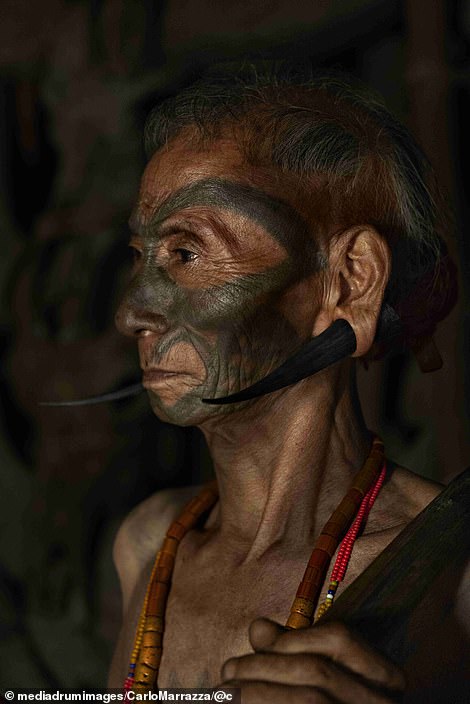 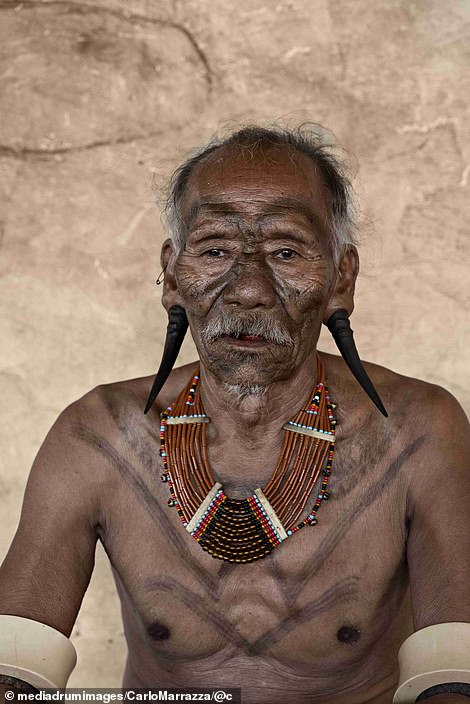 A ceremonial basket of the Konyak tribe with a skull and two human heads carved from wood is known from a barn. There are 320,000 of the Konyak ethnic group, but most have abandoned their ancestral traditions

‘Almost all the photos were taken inside poorly lit huts. Not wanting to use artificial lights, I had to make do with the light coming in through the doors and small windows. A young Konyak had a good knowledge of English, so we were able to communicate.’

The tribe was largely unknown up until the British colonisation of India and Burma and is steeped in mystery, set to take their unique culture to the grave when the last member dies.

Tribe members famously used to hack skulls off bodies of rival tribes and proudly display them in the villages to celebrate the killer’s achievement, with the number of hunted heads indicating a warrior’s power.

It was believed that human heads gave off a mystical force that would bring prosperity and benefit local crops.

Following Christian missionaries first visiting the Konyaks in the 1870s, many of the tribe members converted to Christianity. As such, traditions like beheading were wiped out a century later.