In recent weeks, Leon Stingas spent his time pottering in his garden in Reservoir, savouring the sun after Melbourne’s long winter and planting vegetable seedlings for the summer ahead.

At 78 years old, the grandfather still had a thick thatch of hair that showed no sign of receding or balding, something he attributed to using blocks of soap rather than commercial shampoo.

He was looking forward to seeing his seven grandchildren after months of lockdown, and meeting his eighth due to be born in February. This summer he’d planned to be whiling away long, hot days on the Rosebud foreshore where he parked his caravan each year. 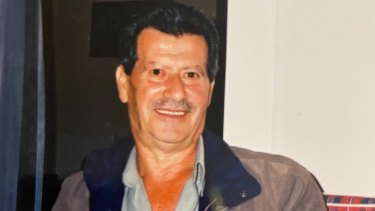 Leon Stingas in the mid 2000s taken in his home country, Greece.

But Mr Stingas won’t be picking the fruits from his beloved citrus trees this summer. The father of three, who was apprehensive about hospitals and COVID-19 vaccines, died alone in hospital a week ago after catching the virus from a relative who unwittingly brought it into his home. 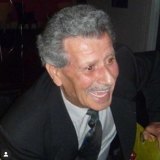 Mr Stingas at a family gathering in 2012.

Melbourne’s Greek community has been shaken by Mr Stingas’ death, but it has prompted some who were hesitant about getting a coronavirus vaccine to finally roll up their sleeves.

“The phone’s been ringing off the hook,” said his son Bill, 49. “People are saying, ‘I can’t believe what’s happened to Leon, I went and got my vaccine when I heard’.”

Bill hopes sharing his family’s story will encourage other Victorian families to get vaccinated and avoid the grief he is experiencing.

“This is the reality of what’s happening to families at the moment,” he said.

Mr Stingas had a host of medical conditions: diabetes, blood pressure issues and nerve damage from a stroke he suffered at the age of 44.

A stoic man who had taught himself to walk and talk again after his stroke, he had refused his son’s pleas to get a COVID-19 vaccine due to bad reactions to flu shots in the past and fears about the health system. 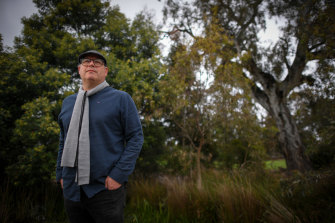 Bill Stingas’ father, Leon, died from COVID-19 a week ago. Leon was unvaccinated and caught the virus from a family member. Credit:Eddie Jim

“He would say, ‘you go into hospital, you never come out’, and I would say, ’Dad, this is not a third-world country,” Bill said.

Three weeks ago, Bill’s worst fears came true. A family member contracted the virus at work and passed it on to Mr Stingas.

By Monday, September 13 – four days after catching the virus – he was critically unwell. He couldn’t get out of bed and was being spoon-fed by Amalia, his wife of 53 years, who had been vaccinated and was not infected.

“That’s when I stepped in and called the ambulance who took him to [The Alfred] ICU,” says Bill. “He would have died that night at home for sure because he couldn’t breathe.”

It was the last time Amalia would see her husband in the flesh. Bill hadn’t seen his father in person for at least three months, since before Melbourne’s fifth lockdown. 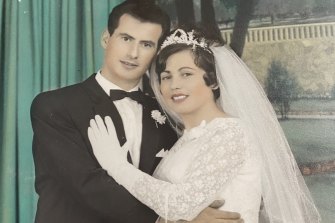 Leon and Amalia on their wedding day in Australia in 1968.

Mr Stingas entered the hospital alone and confused. Nurses had to call Bill so he could translate for his father, simple requests such as the need to clear his throat.

“The dignity that [he lost] is the worst part because [he’d] been fiercely independent for so many years,” Bill said. 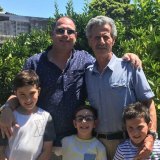 Bill Stingas with his father Leon and three children, back in 2019.

Last Saturday at 7am, Bill received a call. His father was dying and had only hours left.

The hospital planned to move Mr Stingas into a palliative care unit, where two family members could visit for two hours to farewell him, but he deteriorated so quickly he couldn’t be moved out of ICU.

The Stingas family instead said goodbye to their patriarch, the man with a cheeky smile and “hair you could run a rake through”, through a video call on an iPad.

“We joined a video call with the hospital, myself, mum and brothers, and for the next 28 hours we sat with Leon all day, night and morning until he took his last breath on Sunday morning,” Bill said.

Born in Greece under Nazi occupation in 1943 and the youngest of five children to a family of tobacco farmers, Mr Stingas’ early years were spent in the fields and drying houses of his father’s farms.

He escaped his home country’s military dictatorship in 1967 and migrated to Australia on storied ship the Patris with thousands of other Greeks. After settling in Melbourne’s north, Mr Stingas led a rich life growing his young family, working in the tobacco industry and eventually running suburban fish and chipperies.

He and Amalia were sun lovers and returned to Greece many times in the 1990s and 2000s visiting clifftop monasteries and idyllic islands. Lefkas and Rhodes were his favourites.

Mr Stingas enjoyed life’s simple pleasures: his family, playing card games and backgammon, chatting around the dinner table, talking about the weather, and his beloved garden, where he grew organic veggies.

Bill’s grief is a lonely one. His family can’t gather to mourn together because some are still in isolation due to exposure to the virus.

“There’s nothing else I can do. All I’ve been able to do is buy a new suit and a nice pair of shoes for my dad to be buried in,” he said.

“I hope this will make people help their elderly parents, their brothers, sisters, relatives and work colleagues [by getting vaccinated].

“One jab in each arm makes a difference.”

Stay across the most crucial developments related to the pandemic with the Coronavirus Update. Sign up for the weekly newsletter.