Washington: The second night of the Republican National Convention was a norm-defying reality television episode featuring a presidential pardon for a former bank robber, a live citizenship ceremony at the White House and a controversial appearance by the nation's top diplomat.

Absent for the bulk of the night was the issue that still dominates American life: the coronavirus pandemic. When White House economic adviser Larry Kudlow mentioned it in a video message he used the past tense. It was as if the pandemic is in the rear view mirror when, in fact, it is still claiming more than 1000 American lives a day. 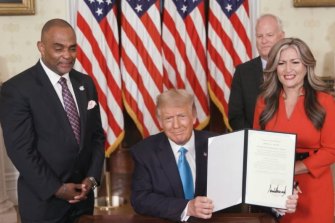 John Ponder, on the left, next to Donald Trump.

In his second appearance, Trump and Chad Wolf, the acting secretary of the Department of Homeland Security (DHS), administered a naturalisation ceremony for five immigrants from Bolivia, Lebanon, India, Sudan and Ghana. It was an audacious move for a president who has made it his mission to slash the number of illegal and illegal immigrants entering the US.

"You've earned the most prized, treasured, cherished, and priceless possession anywhere in the world," Trump said. "It's called American citizenship. There is no higher honour and no greater privilege."

Legal experts were immediately outraged, blasting the event as a clear breach of the Hatch Act which prohibits government employees from engaging in party-political activity on federal property. Presidents are exempt but officials such as Wolf, the acting DHS secretary, is not.

Just as unprecedented was Secretary of State Mike Pompeo's decision to speak at the convention while travelling on official businesses in Israel. This was the first time a sitting secretary of state has made a speech at a party convention.

In a video appearance from the rooftop of the famous King David Hotel in Jerusalem, Pompeo said Trump had led "bold initiatives in nearly every corner of the world" including his tariffs on Chinese goods, peace talks with North Korea and a diplomatic breakthrough between Israel and the United Arab Emirates.

Continuing a clear strategy from the previous night, there was a noticeable effort to reach out to black voters. Referring to Biden's claim that "you ain't black" unless you vote for him, Kentucky Attorney-General Daniel Cameron said: "Mr Vice President, look at me. I am Black. We are not all the same, sir. I am not in chains. My mind is my own."

One scheduled convention speaker, Mary Ann Mendoza, whose son was killed by a drunk driver living in the United States illegally, was pulled from the lineup at the last minute after posting a convoluted anti-Semitic conspiracy theory on Twitter.

The night ended with headline speaker Melania Trump, who did something distinctive: express sympathy for COVID-19 victims and their families. She was speaking from the White House Rose Garden, in front of an audience whose members were not socially distanced and were mostly not wearing masks. 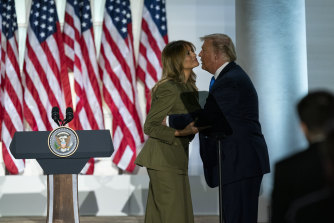 President Donald Trump joins first lady Melania Trump on stage after her speech to the 2020 Republican National Convention from the Rose Garden of the White House.Credit:AP

The first lady and her advisers reportedly wrote the 25-minute speech with little input from the White House. Her speech was far more conciliatory than the others of the night, calling for national unity during a reckoning over race relations.

Melania Trump spent much of her speech talking about her own work – including her "Be Best" anti-bullying initiative – but also praised her husband, saying he will "not stop fighting for you and your family" if he is re-elected.

"I see how hard he works each day and night and despite the unprecedented attacks from the media, he will not give up," she said.

"We know Donald Trump makes no secret about how he feels about things. Total honesty is what we as citizens deserve from our president."

END_OF_DOCUMENT_TOKEN_TO_BE_REPLACED

END_OF_DOCUMENT_TOKEN_TO_BE_REPLACED
Recent Posts
We and our partners use cookies on this site to improve our service, perform analytics, personalize advertising, measure advertising performance, and remember website preferences.Ok