Emily Maitlis modelled herself on Line of Duty’s DCI Kate Fleming during her interview with Prince Andrew, the broadcaster has revealed.

The BBC Newsnight presenter says she copied the interrogation approach of Vicky McClure’s anti-corruption cop as she questioned the Duke of York.

The interview made headlines around the world after the Prince made a series of outlandish claims regarding his relationship with billionaire paedophile Jeffrey Epstein. 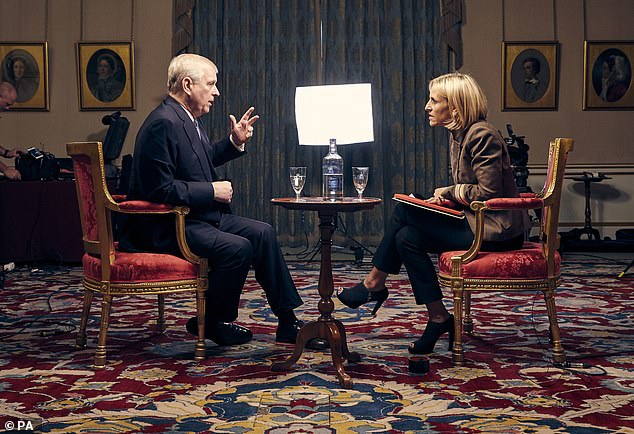 Prince Andrew, the Duke of York, speaking about his links to Jeffrey Epstein in an interview with BBC Newsnight’s Emily Maitlis, which took place at Buckingham Palace last November

Such was the controversy over his remarks, the Duke was forced to withdraw from royal duties.

Maitlis, 49, won widespread praise for the way she conducted last November’s interview. Now she has revealed where she drew her inspiration from.

‘There’s something so calmly forensic about the way she does it. It’s really unemotional, really calm, really quiet, but you just know she’s one all her homework.

‘That was the thing I wanted. I would have shown myself up if I’d got the dates wrong, I got the names wrong if I’d said something that he’d had to massively contradict because I’d mixed things up.’

The BBC drama – written by Jed Mecurio – focusses on DCI Fleming’s pursuit of corrupt police officers and has won multiple awards since in began in 2012. 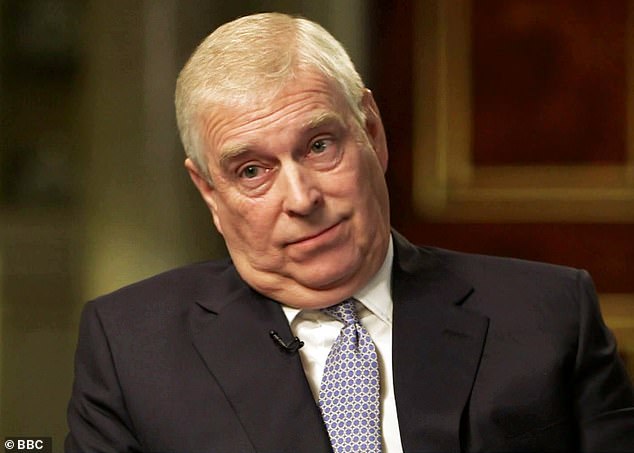 Prince Andrew, pictured during the BBC Newsnight interview, in which the Duke of York repeatedly denied claims he had sex with Virginia Roberts when she was 17

Maitlis said that during the interview, she resisted the urge to ‘dance’ internally and concentrated on trying to remember to ask all the questions she had prepared.

‘I just thought what an extraordinary thing to say,’ she said.

‘Literally everything that came out of his mouth was sort of extraordinary as a journalist trying to piece the story together.

‘It was a question of making sure we understood the full narrative of what he was trying to tell us. 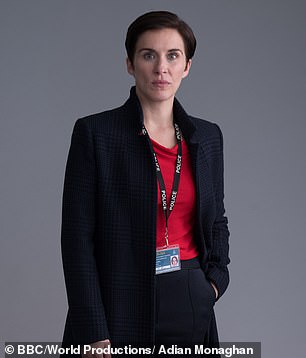 ‘You just don’t want to drop the ball.’

During last year’s interview, Prince Andrew repeatedly denied claims he had sex with Virginia Roberts when she was 17 – but was then accused of lying by Miss Roberts.

He said he did not recall meeting Miss Roberts and emphatically denied that he had sex with her.

On the occasion she said they first met in 2001 – when she claimed she was ‘trafficked’ to Britain by Epstein – he said he spent the day with his daughter Princess Beatrice and then took her to Pizza Express in Woking for a party.

He also questioned Miss Roberts’ account of them dancing together at the London nightclub Tramp, when she said he was sweating heavily.

The Duke of York said he had suffered from a medical condition at the time which meant he did not sweat.

He also sought to cast doubt on the authenticity of a photograph that showed him with his arm around Miss Roberts’ waist, but conceded that it was difficult to prove if it was a fake.

Related posts:
Be, DCI, like, Maitlis, to, Wanted
Celebrities

END_OF_DOCUMENT_TOKEN_TO_BE_REPLACED

END_OF_DOCUMENT_TOKEN_TO_BE_REPLACED
Recent Posts
We and our partners use cookies on this site to improve our service, perform analytics, personalize advertising, measure advertising performance, and remember website preferences.Ok