Victorian and Tasmanian unions have funnelled $200,000 to the failed campaign of Labor aligned-candidate for Melbourne Town Hall, Jennifer Yang.

By far the largest donor to Ms Yang's campaign was the Victorian-Tasmanian branch of the CFMEU, which donated $195,838 for printing and postage. 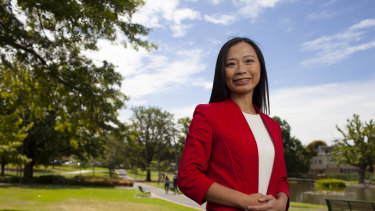 Labor-aligned candidate Jennifer Yang was supported by the CFMEU to the tune of $195,000.Credit:Eamon Gallagher

In November's council elections, Ms Yang – who was backed by the industrial left of the ALP – won 9.2 per cent of first-preference votes, coming sixth.

Cr Capp, who won with 53.4 per cent of the vote after preferences, took donations totalling more than $316,000 in her race to reclaim the lord mayoralty.

The two largest donations to Cr Capp's campaign were from Pratt Holdings, which donated $25,000 and New Core Group Pty Ltd, which also donated $25,000.

Other major donors include former federal member for Canberra Ros Kelly, who is the Lord Mayor's aunt and contributed $20,000 to the campaign, and private equity firm boss Mark Summerhayes and wife, brand executive Georgie Summerhayes, who gave $20,000.

Deputy Lord Mayor Nicholas Reece and Cr Capp both stumped up $20,000 from their own pockets to the campaign, and Maurice Blackburn Lawyers gave $10,000.

Lobbyists Spring Street Advisory – headed by Ken McAlpine, who was a chief of staff and policy advisor to the Bracks and Brumby state Labor governments – donated $5000 to the campaign.

Mr Reed attracted a $15,000 donation from the Electrical Trades Union as part of $52,564 in total donations for his campaign. That sum included $1500 from his own pocket.

During the campaign, Cr Capp and other candidates resisted a push to have all donations disclosed in real time, saying she supported greater transparency in local government, but only a compulsory scheme would achieve it.

Some candidates participated in a voluntary donations register hosted and managed by the Hyperlocal News mastheads.

Former deputy lord mayor Arron Wood attracted $20,000 in donations from Highrise Carpentry, a firm working for Multiplex on the construction of the Southern Hemisphere’s tallest residential tower, Australia 108, in Southbank.

Despite being a vocal advocate for voluntary disclosures, Mr Wood did not disclose the $20,000 donation to Hyperlocal News.

END_OF_DOCUMENT_TOKEN_TO_BE_REPLACED

END_OF_DOCUMENT_TOKEN_TO_BE_REPLACED
Recent Posts
We and our partners use cookies on this site to improve our service, perform analytics, personalize advertising, measure advertising performance, and remember website preferences.Ok