Singapore: The Malaysian king and the heads of the country’s eight other royal families will hold a special conference of rulers next week as calls grow for the resumption of parliament in a nation battling a surging COVID wave.

The south-east Asian nation has since January been under a state of emergency, invoked by King Sultan Abdullah Sultan Ahmad at the urging of Prime Minister Muhyiddin Yassin to deal with the pandemic. 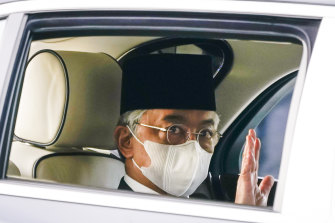 The order is due to run until August 1 but as the COVID-19 crisis as escalated significantly – Malaysia is under a nationwide lockdown with the worst per capita outbreak in the region – there have been renewed appeals to King Sultan Abdullah Ahmad Shah not to extend it beyond then while analysts fear an angry public could “take to the streets” if elections are not staged later this year.

Under its wide-reaching emergency powers, Muhyiddin’s Perikatan Nasional government notably revived so-called anti-fake news legislation in a bid to stamp out misinformation about the virus and vaccines.

Malaysia’s police chief said last week that 10 people had been arrested under the law.

The Twitter profile of a Malaysian man arrested under the country’s fake news laws for questioning a government contract for a vaccination app.Credit:Twitter

However, it is now being utilised to investigate a 36-year-old computer salesman from just outside Kuala Lumpur who had raised questions on social media about a government contract for vaccination app.

Police have not released the identity of the man – whose account on Twitter is called @ChairmanGLC – but a lawyer advising him said he was arrested during the middle of the night and remanded for 24 hours before being released on bail by a magistrate.

“I think most of the time it was used against people who spread misinformation about the vaccine,” lawyer Syahredzan Johan, who is also a political secretary for veteran politician Lim Kit Siang from the opposition Democratic Action Party.

Police confirmed the man’s arrest and the seizure of his mobile phone, modem and router.

The government can also seize property and other resources under the temporary emergency ordinances and members of the military are granted “all the powers of a police officer”.

But with Muhyiddin’s already slim parliamentary majority facing collapse if the cornerstone party of his alliance, the United Malays National Organisation, follows through on a threat to withdraw its support, some familiar faces have arrived at the Istana Negara royal palace as the king has called on party leaders across the political spectrum.

Anwar Ibrahim is among the political leaders who have visited the royal palace in the past two days.Credit:Bloomberg

Opposition leader Anwar Ibrahim was there on Wednesday along with others from his Pakatan Harapan pact, and there have since been more party chiefs at the palace including former prime minister Dr Mahathir Mohammad, who despite being in his mid-90s is heading another new political organisation.

There has been talk of a new “unity government” being formed and Mahathir proposed that a national operations council take over as it did during Malaysia’s last emergency following race riots in 1969. He offered to lead the council which would feature parties from both sides of the divide, but was told by the king it was a decision for the government.

Speaking about his own audience with the Yang di-Pertuan Agong, as Malaysia’s monarch is known, Anwar said he didn’t discuss forming a new government, only that he “pleaded with the king to prevent the continuation of the emergency”.

The king also met with Muhyiddin, as he does weekly before cabinet meetings, and will next Wednesday come together with Malaysia’s eight other sultans for the first time during the pandemic.

The special rulers meeting will be only the second since the king ascended to the throne in January 2019 and has been called to discuss the COVID-19 crisis and Malaysia’s response to it.

It has been scheduled as credit rating agency Fitch Ratings forecasts “a worsening of political risks due to widespread and growing dissatisfaction with the government’s handling of the COVID-19 outbreak”.

“Furthermore, rising public anger is likely to affect the unity of Prime Minister Muhyiddin Yassin’s government, and we expect an escalating blame game over the issue ahead of promised elections,” the US credit rating agency said.

“Risks of protests are also rising as a result, and elections not being held over the coming months could serve as a spark for Malaysians to take to the streets.“

There are major worries, however, about an election being a super-spreader event.

The next national polls are not due until 2023 but Muhyiddin has said he will turn to voters when Malaysia has overcome the virus.