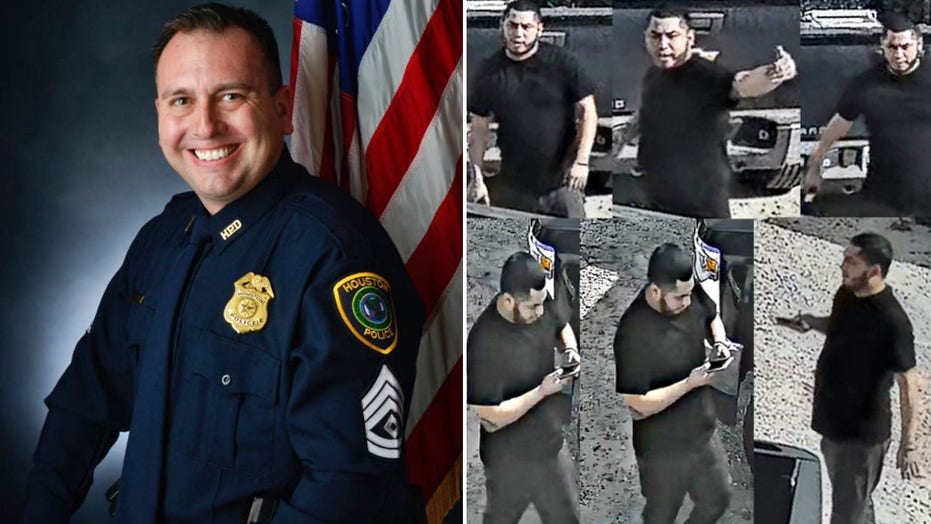 A manhunt continued Wednesday for a second suspect who remained at large just two days after Houston Police Sgt. Sean Rios was fatally gunned down after entering a hotel parking lot on his way to work, leaving behind four children.

The first suspect, Robert Soliz, 24, was arrested without incident at about 3:15 p.m. Tuesday during a traffic stop on Interstate 10 in west Houston on a warrant accusing him of Rios’ murder Monday. Police released security camera footage showing Soliz, seen in a white T-shirt, with another heavily tattooed Hispanic male, with a beard and mustache, and wearing a black T-shirt, authorities said.

That man, who hasn't been named by police, is wanted for questioning in connection with Rios’ death and was also seen in the video with a black pickup truck.

“That person is a person of extreme interest in the murder of Sgt. Sean Rios. To that individual: We’re coming for ya, we’re going to find ya, so you might as well turn yourself in,” Acevedo said, without identifying the second suspect by name.

Investigators believe Soliz had been involved in road-rage incidents involving firearms, Acevedo said, though he was initially uncooperative with detectives who were questioning him. Soliz has since been booked into the Harris County Jail.

Rios, 47, was fatally shot while driving his black KIA sedan to work on Interstate 45 in north Houston. The 25-year veteran of the Houston force staggered into the office of a small motel bleeding from multiple gunshot wounds. He collapsed and died about 1:30 p.m. Monday, and a manhunt ensued for the suspect.

Shortly before the Rios shooting was reported, police received 911 calls of gunshots being exchanged between a white pickup truck and a blue Mercedes matching the description of one belonging to Soliz.

“And so we believe there’s a high probability that Sgt. Rios saw that incident between those two vehicles and, sadly, ended up losing his life in trying to intervene,” Acevedo said. The chief said witnesses told officers two Hispanic males fled the scene, one in the blue Mercedes, another in a black Chevy truck, like the one seen in the surveillance video.

Rios is the second Houston police officer to be killed in the past three weeks and the fourth since December. Police Sgt. Harold Preston was shot and killed on Oct. 20 while responding to a domestic violence situation. The 41-year veteran of the department was preparing to retire this year.

END_OF_DOCUMENT_TOKEN_TO_BE_REPLACED

END_OF_DOCUMENT_TOKEN_TO_BE_REPLACED
Recent Posts
We and our partners use cookies on this site to improve our service, perform analytics, personalize advertising, measure advertising performance, and remember website preferences.Ok