A stunning futuristic mansion surrounded by rolling countryside views and designed by the architect that inspired James Bond’s arch-villain Goldfinger has hit the market for £3 million.

The Grade II-listed property, Teesdale, which is located in the affluent area of Windlesham, Surrey, features four bedrooms, three bathrooms, an open-plan kitchen and an office space.

Sitting just a stone’s throw away from the exclusive Wentworth Golf Club, the luxurious property was designed by the world-renowned Hungarian architect Erno Goldfinger who was the real-life inspiration for 007’s most iconic nemesis Auric Goldfinger –  who was portrayed by Gert Fröbe in the 1964 Bond film.

The property, which resembles a Bond villain’s lair, also boasts a glass dining hall, discreet gates that lead onto a sweeping driveway and a sprawling garden outside. 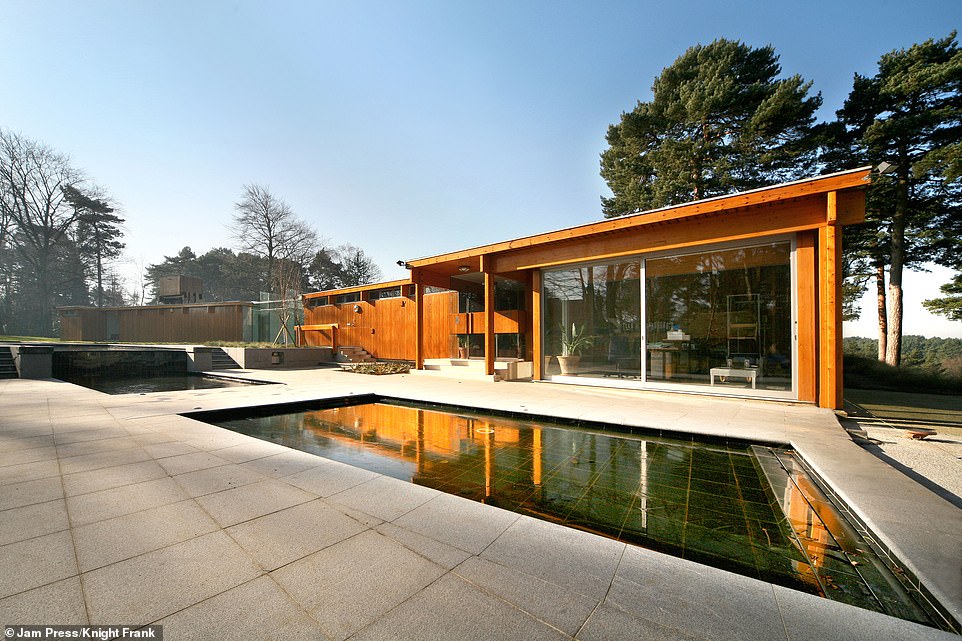 The futuristic mansion, which is located in the affluent area of Windlesham, Surrey, is currently on the market for £3 million with Knight Frank 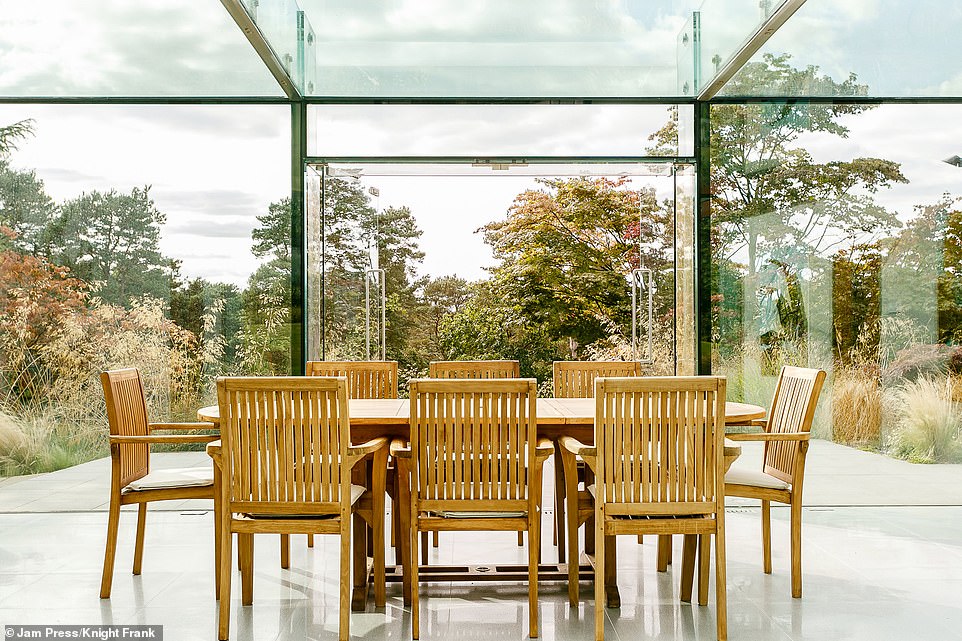 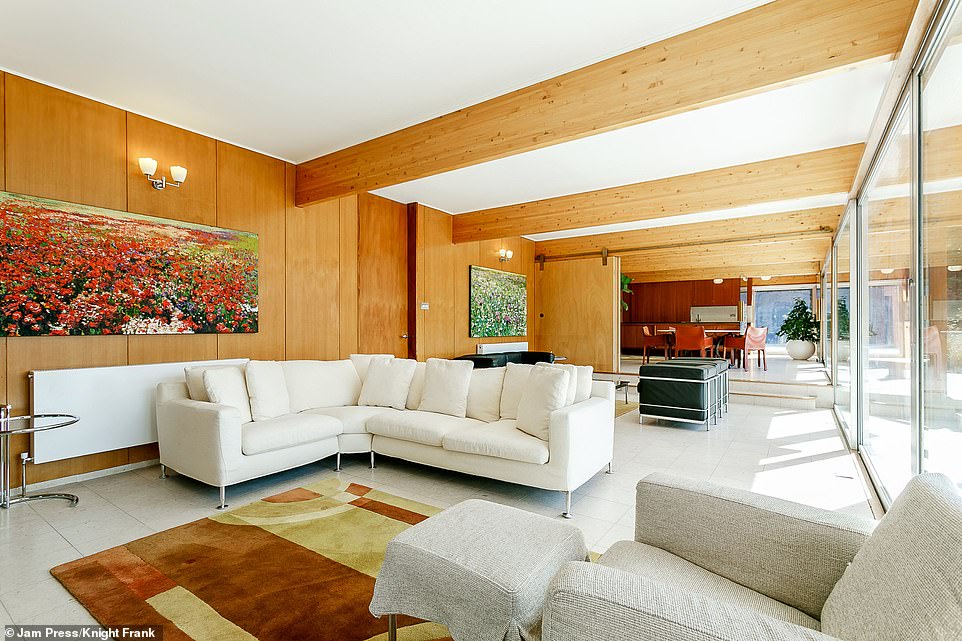 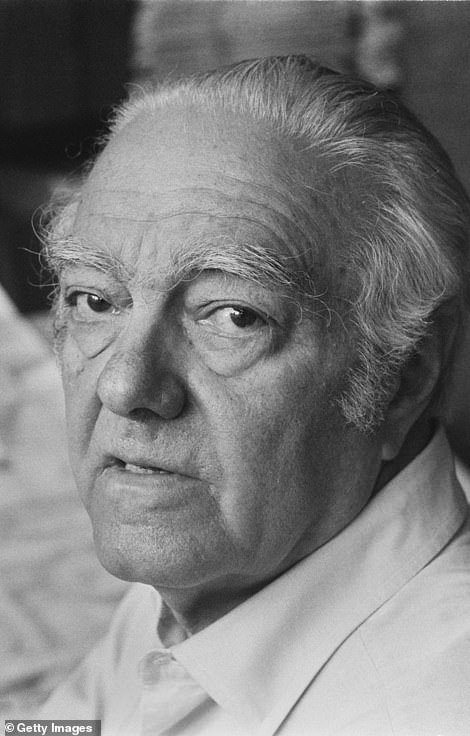 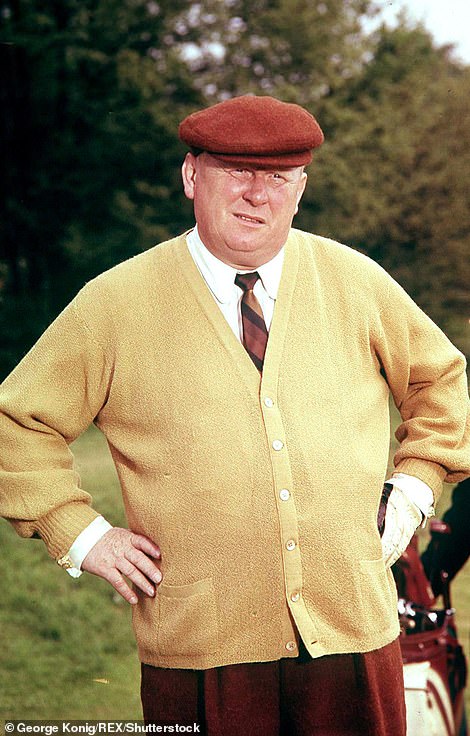 A step inside the property reveals an open-plan living room and dining room which opens out onto the South facing terrace.

Both of the rooms feature huge windows, providing plenty of daylight and giving the property a very spacious feel.

The kitchen is conveniently tucked away to the end of this impressive room and comes complete with a substantial separate larder.

There is also formal glass dining hall that affords magnificent views of the garden’s water features at the front and the countryside at the back.

Beyond the hall is the bedroom ‘wing’, which includes a gigantic master suite and three spacious bedrooms.

To the front of the house is a grand office with two glass walls, providing incredible views of the rolling countryside outside.

In true Bond villain style, the property is approached via discreet gates leading onto a sweeping driveway that climbs up the hill, where you’ll find a terraced water feature.

Outside, the private gardens are well screened on all sides by trees, hedges, shrubs and plants and there is also a sprawling lawn.

The stunning property is surrounded by stunning parkland and woodland and the region is also home to the world-renowned Sunningdale Golf Club and the exclusive Wentworth Club golf course. 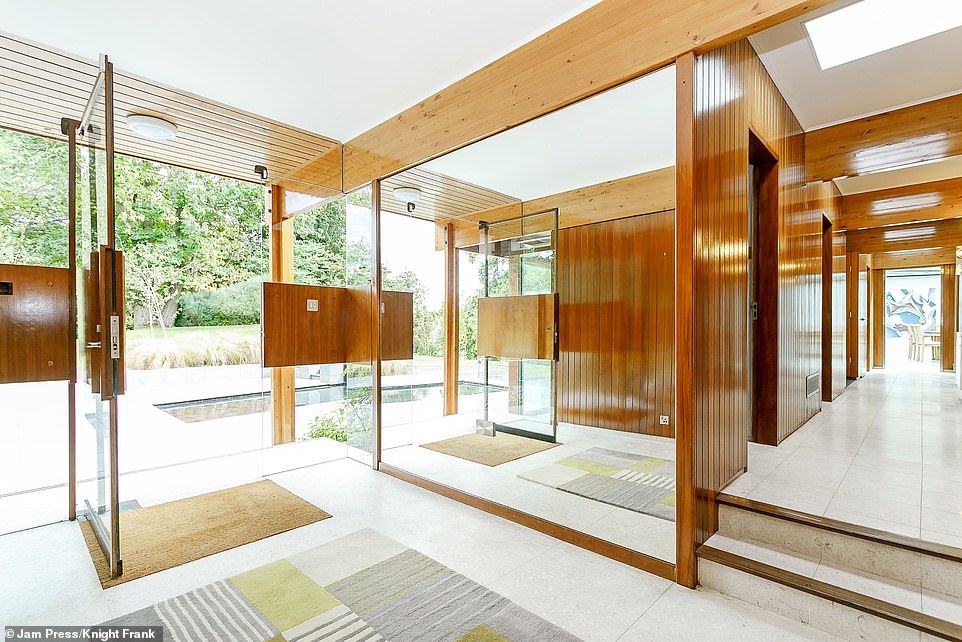 The property, which resembles the inside of a Bond villain’s lair, features wooden panels on the walls and a tiled corridor 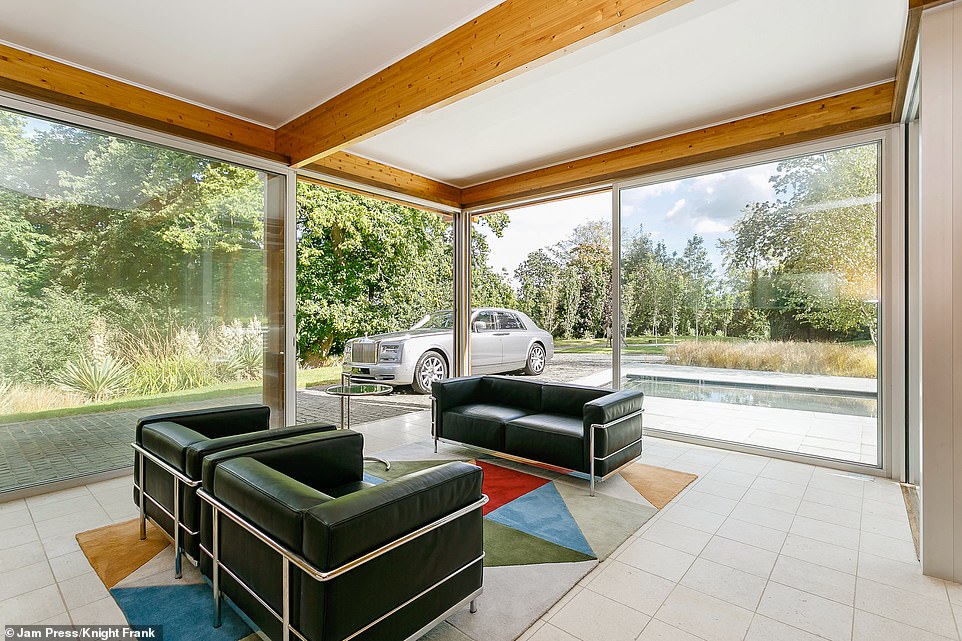 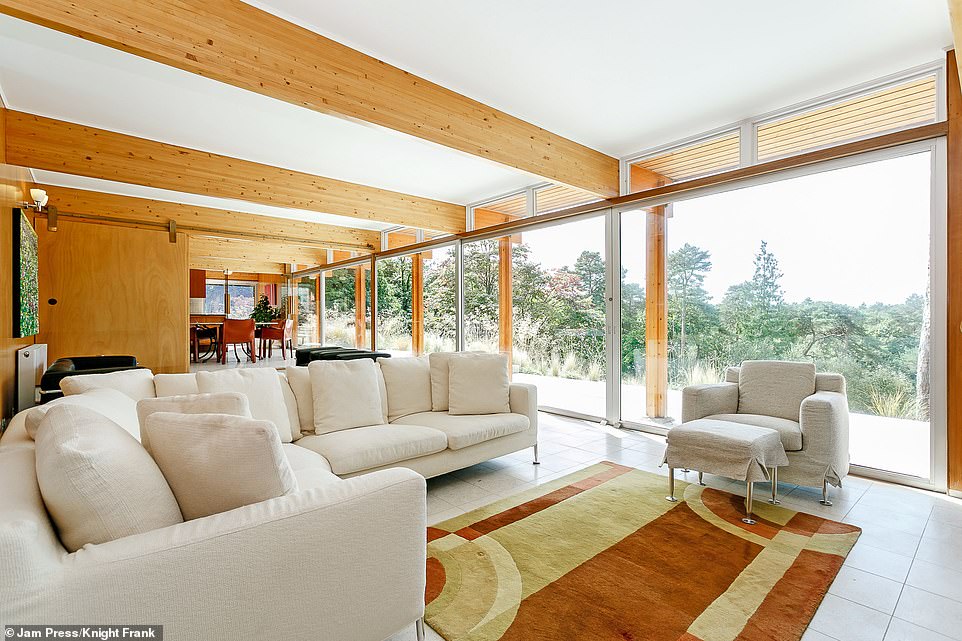 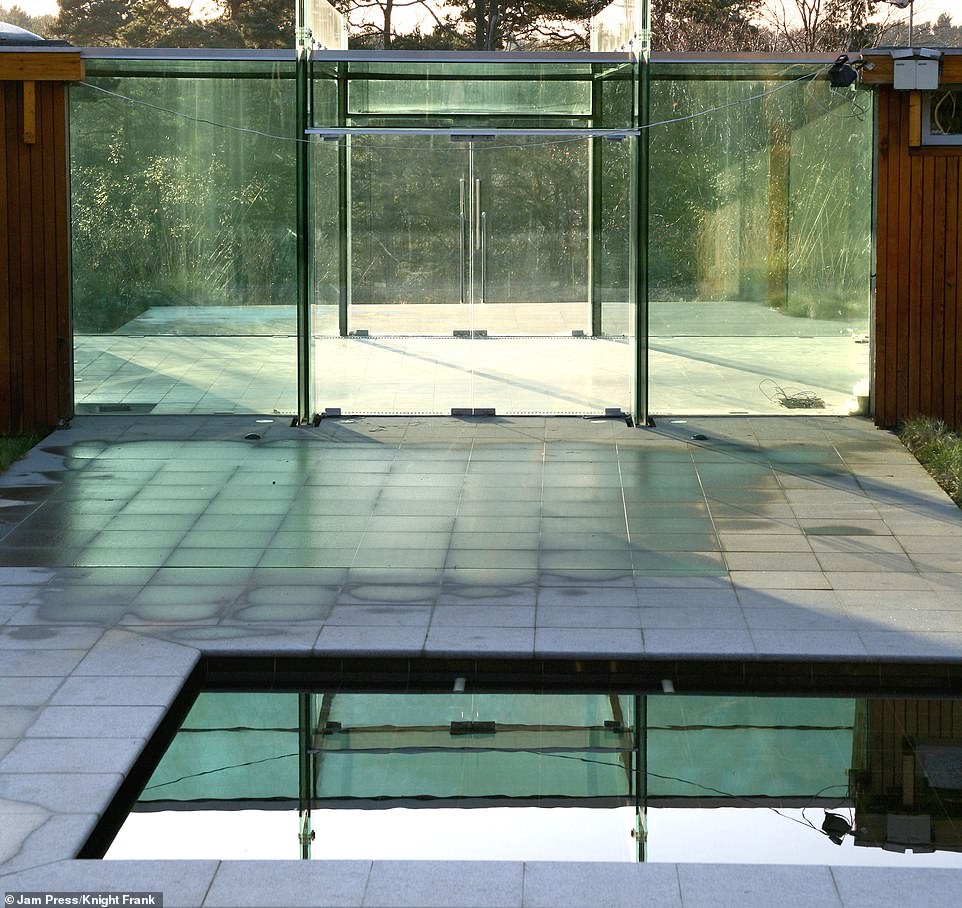 The stunning mansion, which features four bedrooms, three bathrooms, an open-plan kitchen and an office space, also comes with  futuristic glass walls and a water feature outside 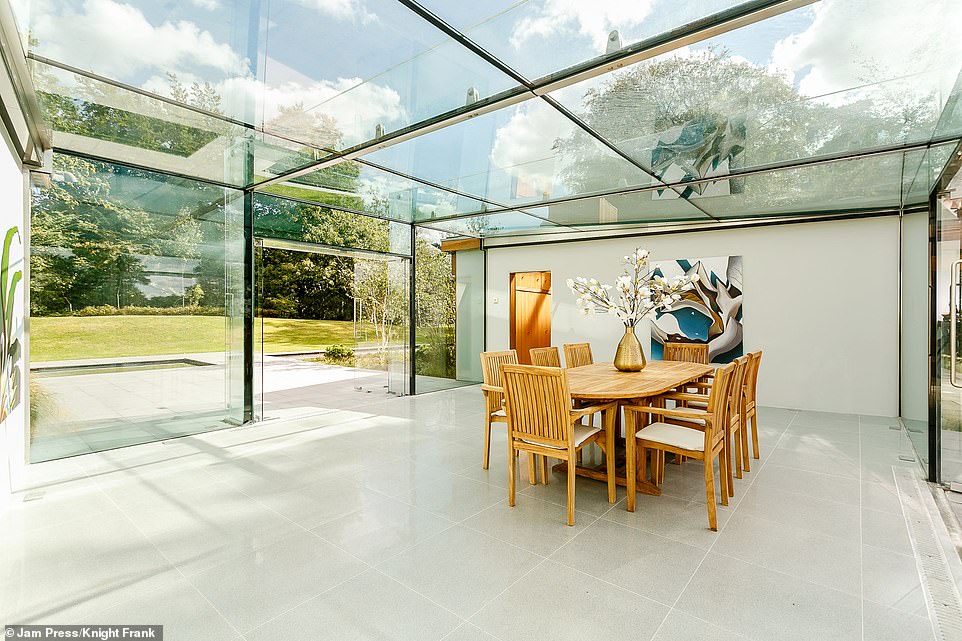 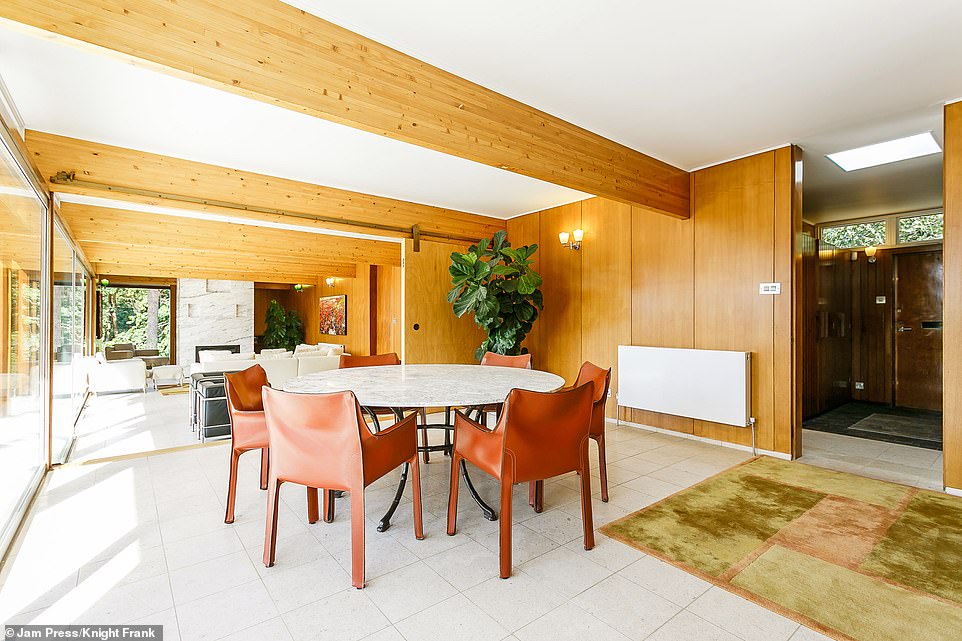 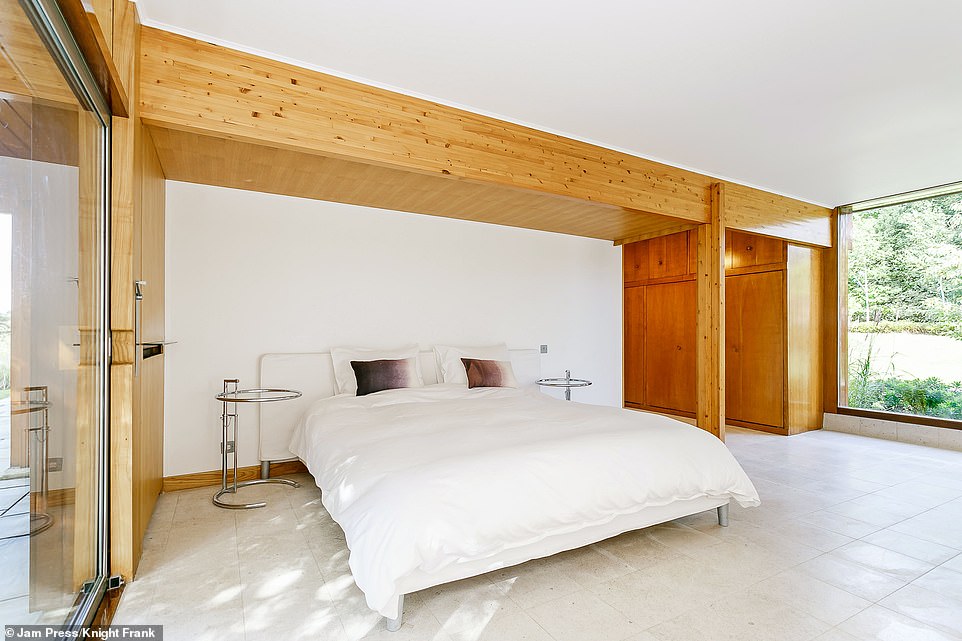 The luxury property, which is on the market with the estate agents Knight Frank, comes with four bedrooms and three bathrooms 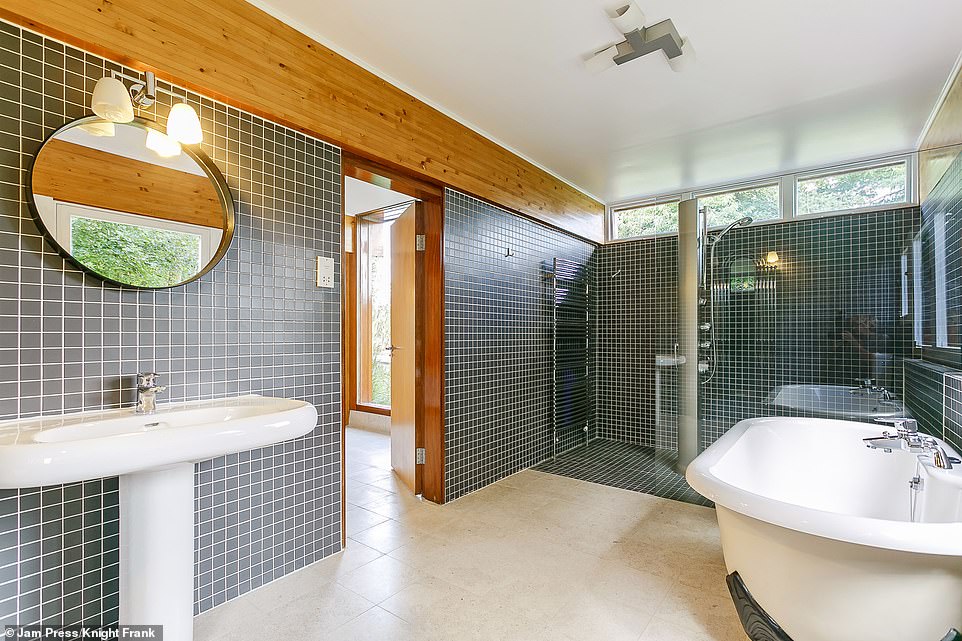 A step inside one of the property’s three bathrooms reveals tiled walls and flooring, a spacious shower and a bath 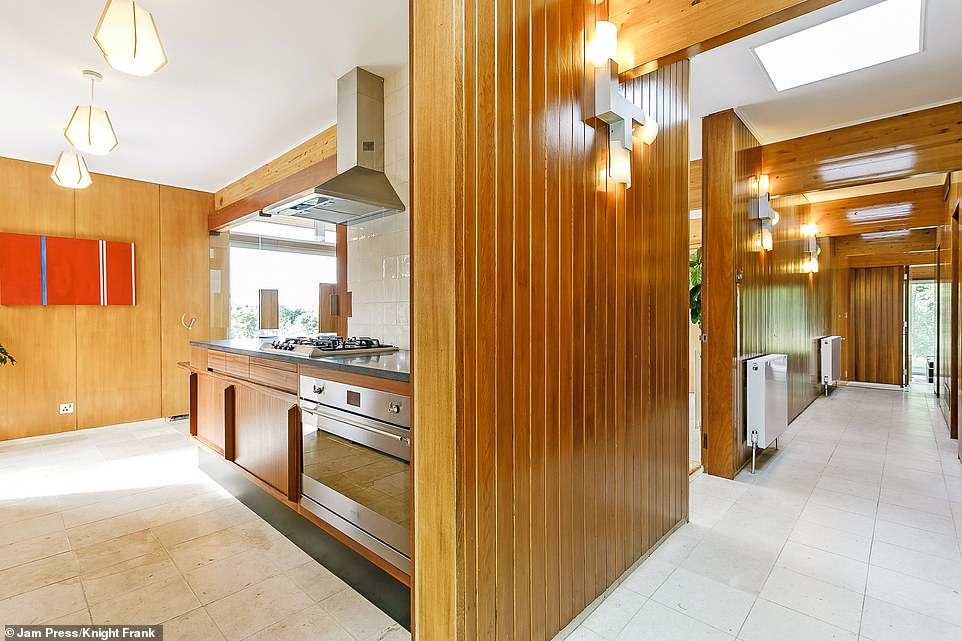 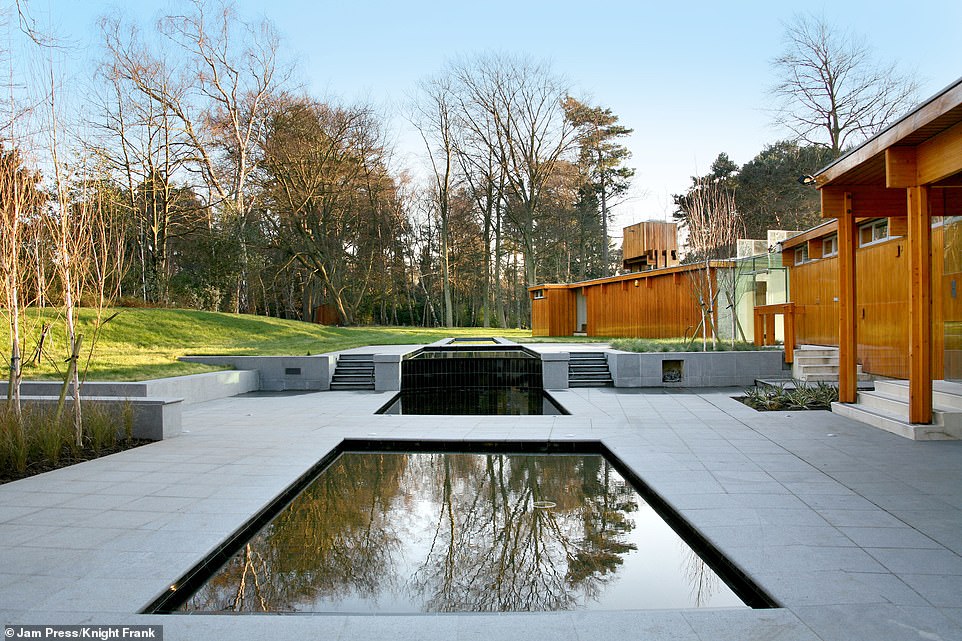 A step outside reveals a private garden that is screened on all sides by trees, hedges, shrubs and plants and also a sprawling lawn 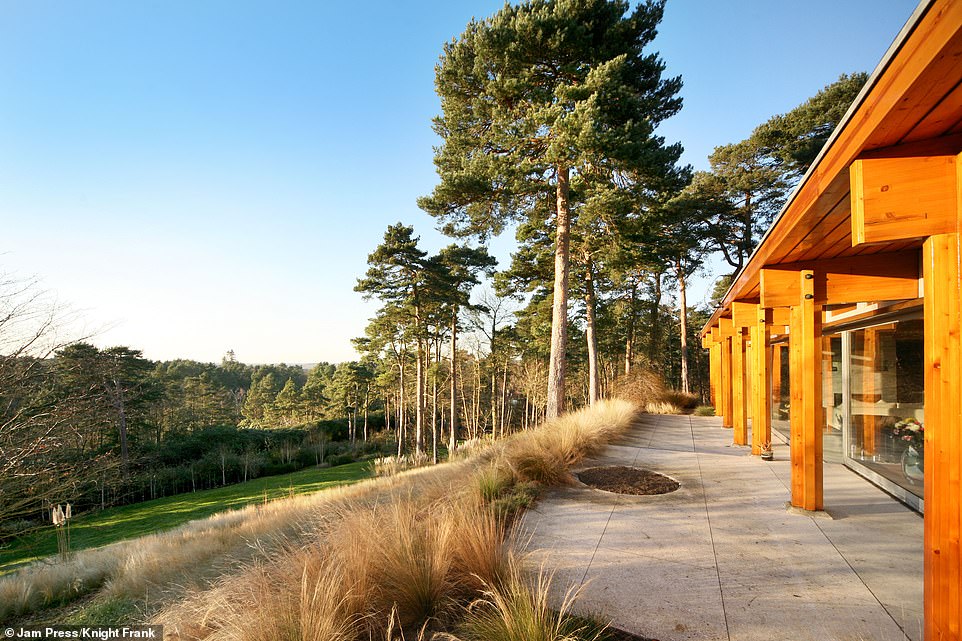 The royal residence of Windsor Castle is also situated within the region, as is Guards Polo Club, which has Her Majesty The Queen as its patron.

Famed for his brutalist style, the architect was best known for his concrete designs, which included the 32-storey Trellick Tower in Kensal Town, west London.

Bond author Ian Fleming knew of the modernist through a golfing friend and had previously had a run-in with him before the Second World War.

Fleming had objected to Goldfinger’s demolition of a row of cottages near his home in Hampstead, north-west London, that were removed to make way for a large modern home.

The encounter rankled with Fleming for more than 20 years before he got his own back on the architect by naming the villain Auric Goldfinger after him in his 1959 novel Goldfinger.

Outraged, Erno Goldfinger then threatened to sue Fleming but relented after the writer attempted to instead name the character ‘Goldpr***’.

Erno Goldfinger stood at 6ft 2in, unlike the Bond villain who tried to rob Fort Knox of America’s gold reserves, who Fleming shrunk to 5ft. He died in November 1987 at the age of 85.

The property is currently on the market with Knight Frank.

The REAL Goldfinger: Communist whose brutalism transformed housing was inspiration for Ian Fleming’s bad guy – and threatened to SUE over the portrayal

Hungarian Erno Goldfinger moved to Paris after the Austro-Hungarian empire fell. He settled in Britain in 1934 after marrying Crosse and Blackwell heiress Ursula Blackwell.

A supporter of communism, he designed the British Communist Party’s headquarters as well as a building for the Daily Worker.

He also built the Balfron Tower in Poplar, East London, and its sister building, the Trellick Tower in Kensal Town, West London.

The towers were part of a post-Second World War push to improve housing for ordinary people in the UK.

He also thought high-rises would solve the lack of housing after the war and give poor people a way out of the slums and into better quality apartments. 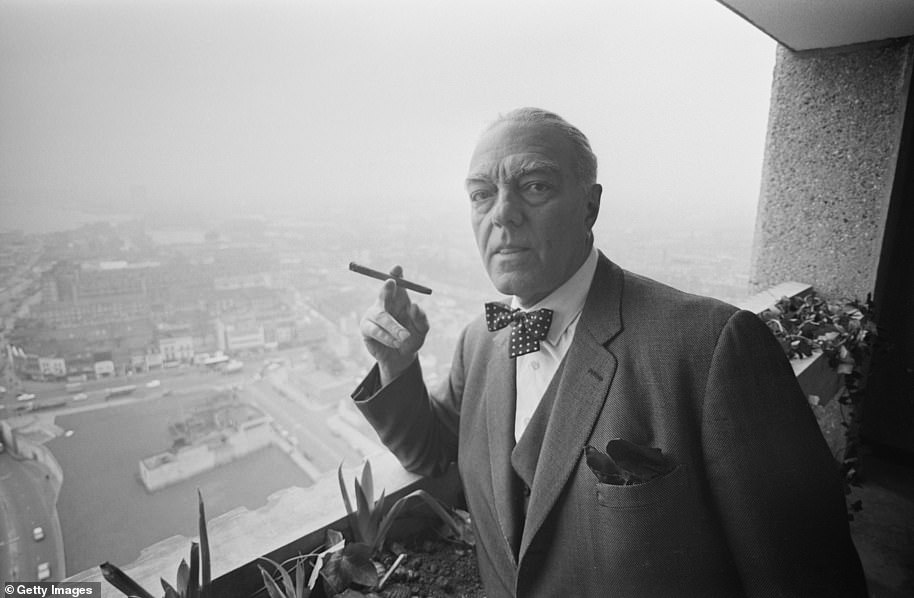 Erno Goldfinger moved to Paris after the Austro-Hungarian empire fell and then settled in Britain in 1934 after marrying Crosse and Blackwell heiress Ursula Blackwell. Pictured: The architect at Balfron Tower in 1968

Prior to branching out into post-war brutalism, Goldfinger build terraces in Hampstead, including his home at 2 Williow Road.

It was this project that drew Fleming’s anger, as he opposed the demolition of several cottages to make way for it. To exact revenge for the destruction of the properties, he created named his villain for the 1959 novel Auric Goldfinger, which the architect got wind of before it went to press.

When Goldfinger threatened to Fleming, Jonathan Cape’s presses told the designer they would make clear in any promotions that all characters were fictitious and would settle out of court.

Fleming was infuriated by this and threatened to rename the villain Goldp****, at which point the architect stopped pursuing legal action.

It wasn’t enough for Fleming to simply name the villain after the Hungarian, he also wrote the character as being just 5ft tall, despite the designer being 6ft2ins. 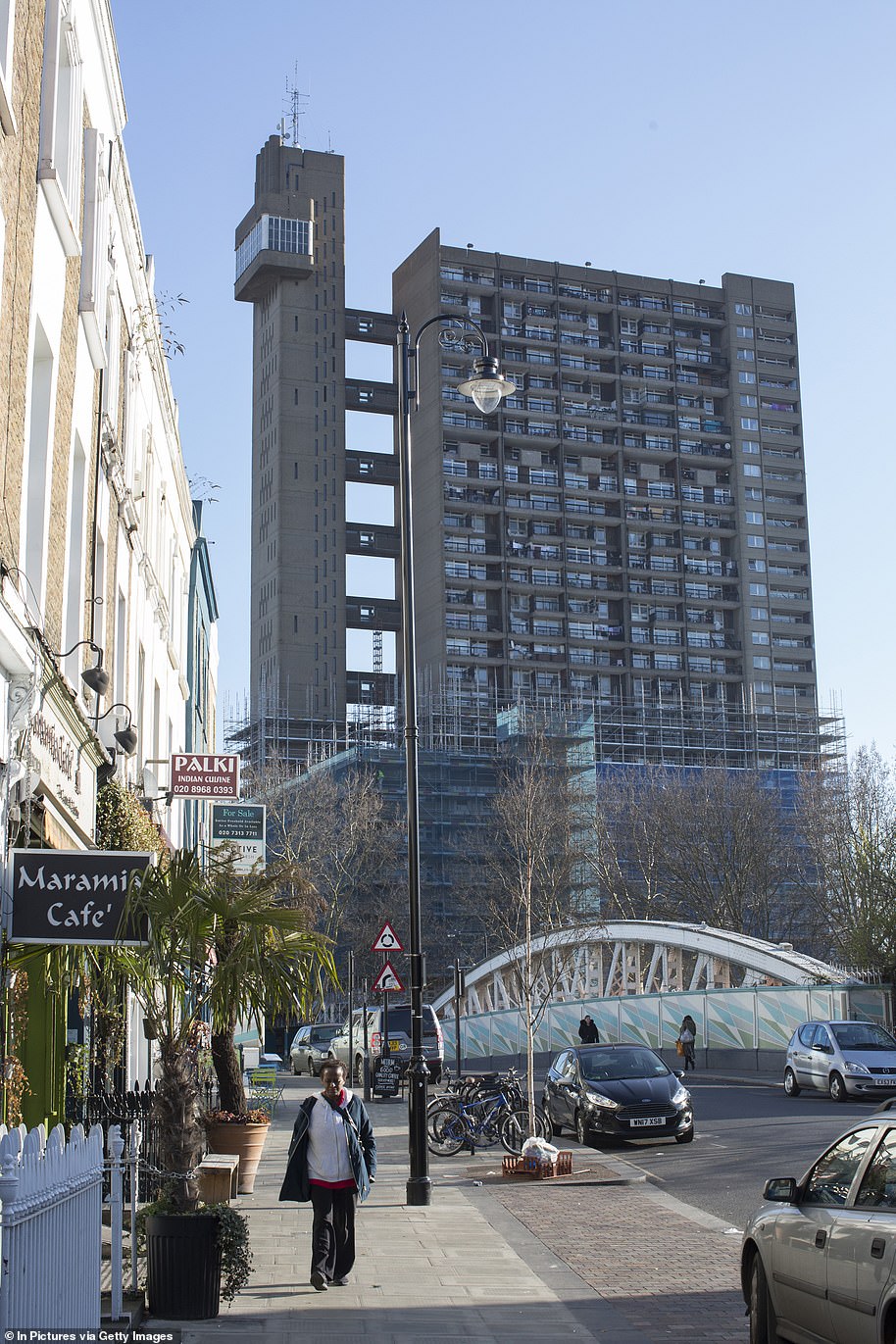 Goldfinger was known for brutalist designs such as this building – Trellick Tower – which is in Kensal Town, London, and was the Poplar tower’s sister building

Things worsened for the architect when the 1964 movie based on Fleming’s novel was released. The designer was bombarded with prank calls in the middle of the night.

People would call him at home to perform their own version of Shirley Bassey’s theme tune or do bad Sean Connery impressions down the phone.

In 1967 Goldfinger lived in the Balfron Tower’s apartment 130 to prove the tower’s desirability. Now, as part of a display on Brutalist architecture, the National Trust has restored the flat to its original 1960s style.