A MASSIVE alligator dragged terrified hunters around in their boat for two hours before they managed to kill it.

The 14ft, 800lbs behemoth was spotted by four men while they were out hunting on a lake in Arkansas at night. 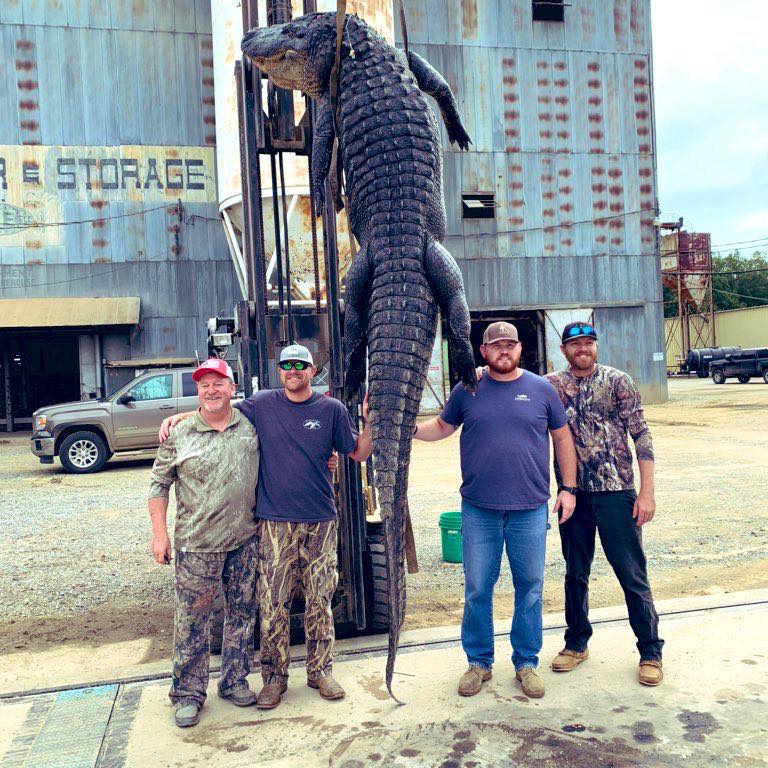 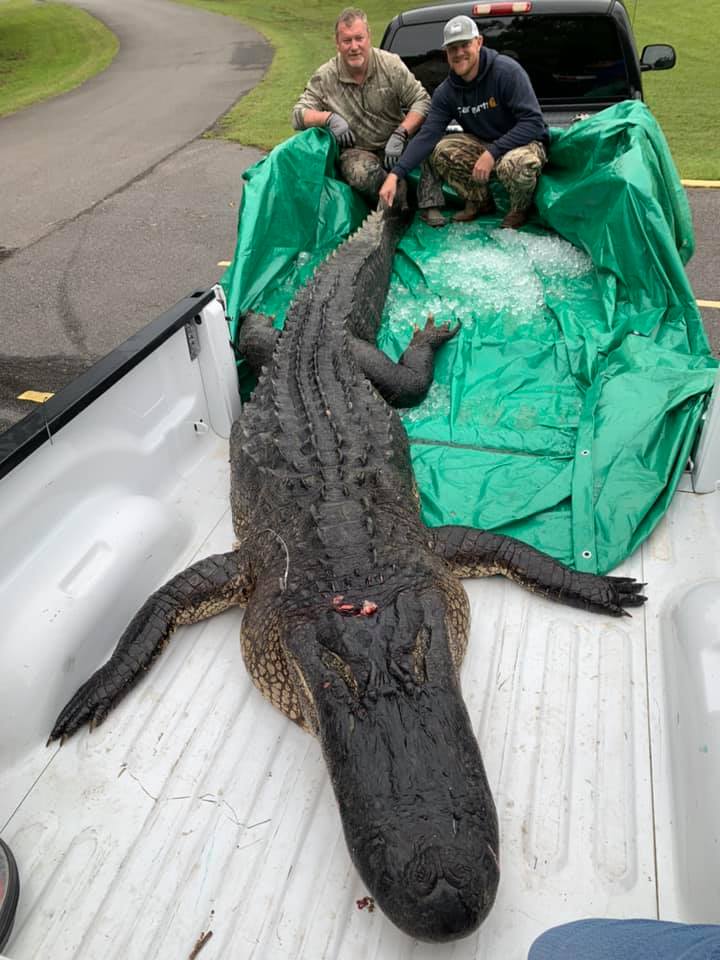 Travis Bearden, his father Gary, brother Cody and friend Tommy Kelley had a permit to hunt alligators and were on Lake Merrisach when the encountered the beast around 11pm.

Travis, 31, said he spotted the alligator when sweeping his torch over the water where “you see red eyes” reflecting in the night.

The men cut their engine and honed in on their prey and Travis said he gripped his harpoon and took a shot.

“I chucked the spear at it. Then I realised it was a very large gator. It pulled our boat like we had the motor running,” he said.

The men then had terrifying two hour ride around the lake courtesy of the alligator. 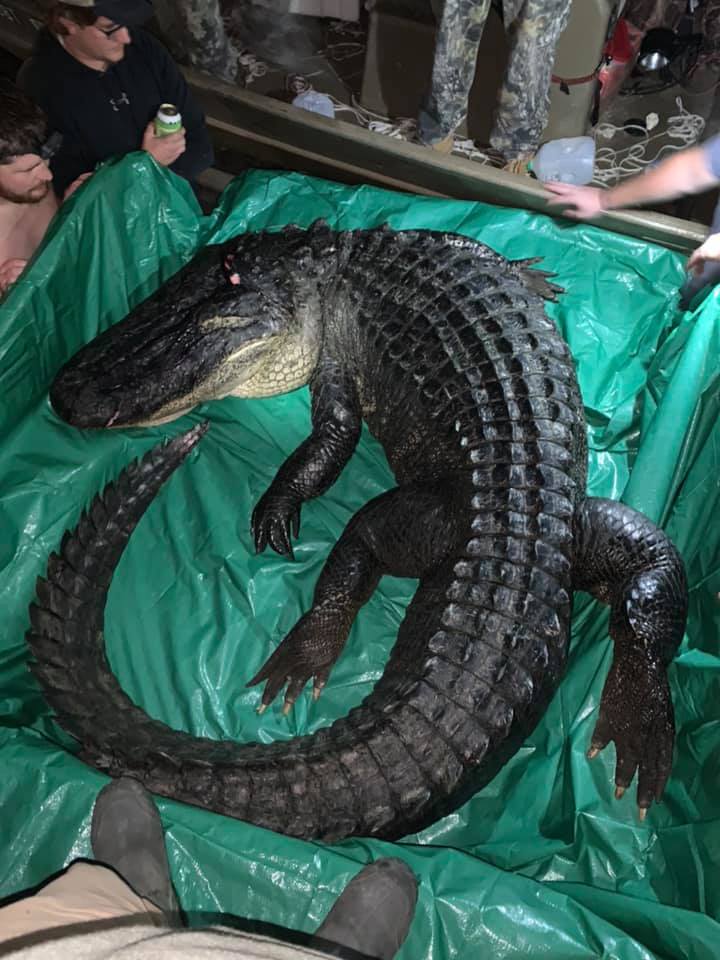 “We weren’t real sure how big he was when we spotted him, and to our surprise after we harpooned it, it ended up being a giant,” Travis told 5News.

“It [dragged] the boat around for almost 2 hours before I was able to get a clean shot on it. Having my dad and my brother there made it that much more special.

“I just sat back and listened to my dad tell stranger after stranger the story. I think he might be more excited than I am.”

After bringing the alligator ashore, the men used a forklift truck to pull the animal into the air for photos.

The animal, which is nearly as long as the vehicle’s extended mast, was dangled in in the air by its neck with its tail brushing the floor. 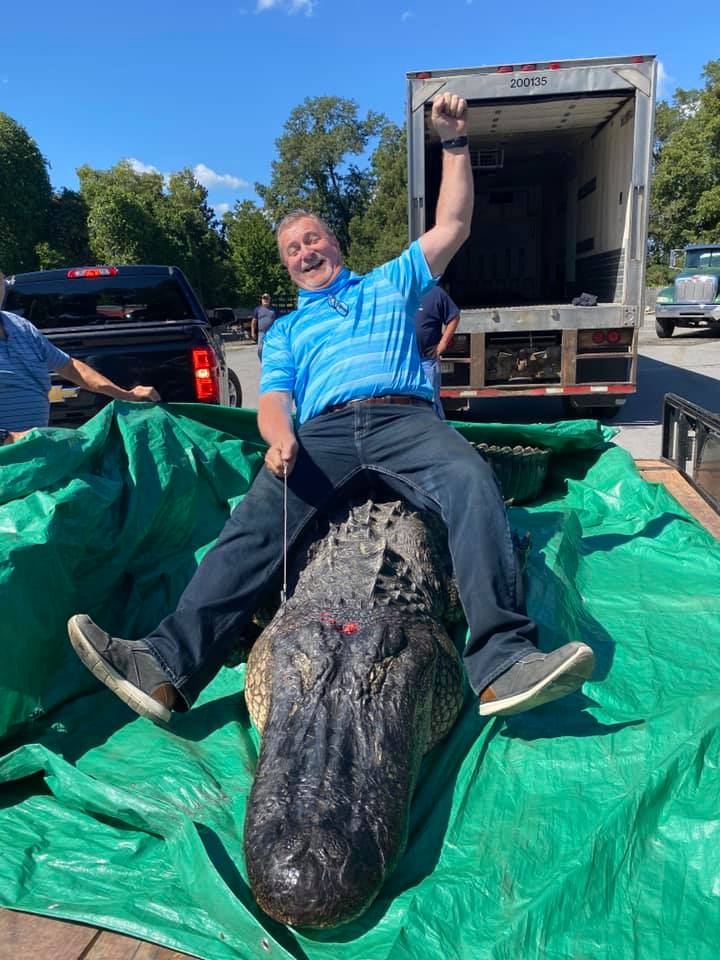 Trey Reid, of the Arkansas Game and Fish Commission, said it was the largest one caught in the history of the state’s alligator hunt

“It might be the largest taken in Arkansas, even back to the 19th century,” he said.

Travis posted a picture of the four men with the alligator on Facebook.

But some users condemned the men, with one writing: “What was the point of killing such a beautiful creature? He wasn't harming anyone and there's absolutely no point in killing him.

Another said: “They should let it live its been here a long time so sad.”

Arkansas began issuing permits to hunt alligators in 2008 in a bid to control numbers with a holder allowed to kill one alligator on public land on one of eight nights in September.

An alligator has to be killed first by snaring or harpoon it, and then dispatching it with a shotgun or an underwater firearm.

END_OF_DOCUMENT_TOKEN_TO_BE_REPLACED

END_OF_DOCUMENT_TOKEN_TO_BE_REPLACED
Recent Posts
We and our partners use cookies on this site to improve our service, perform analytics, personalize advertising, measure advertising performance, and remember website preferences.Ok