Melburnians will be dining al fresco on footpaths, streets and in parking spaces across 16 new outdoor dining precincts as part of Melbourne City Council's plan to reinvigorate the city as it emerges from the economic stranglehold of the COVID-19 crisis.

Melbourne eateries can now apply for a permit to set up tables and chairs on footpaths, in street-side car parks and laneways or to operate in a number of nominated pop-up dining precincts. 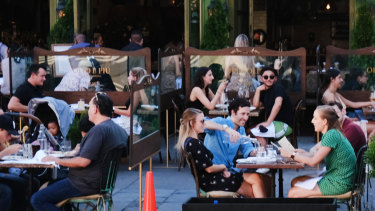 The plan for Melbourne is based on New York’s Open Restaurants scheme.Credit:Getty

Although there are 2390 cafes and restaurants in the City of Melbourne, only 800 venues have outdoor dining permits and space.

For those that do, the council has identified six different precincts – Bourke Street East and Russell Street in the CBD, Lygon Street in Carlton, Errol Street in North Melbourne, Domain Road in South Yarra and Bellair Street in Kensington – where dining will be allowed on the street.

Different eateries will be able to join up with neighbouring businesses to take up more public space.

For those without existing outdoor areas, 10 other areas, including the Queen Victoria Market car park, city laneways and Chinatown, will be opened for pop-up cafes and restaurants, according to Melbourne City Council chief executive Justin Hanney.

"The city [council], with the state government … will pay for all the bollards, planters, [and] safety barriers," he told radio station 3AW on Thursday.

Outdoor permits are free, while grants of up to $10,000 are also being made available for businesses who need to convert outdoor spaces.

"We expect outdoor dining to be so popular with patrons this summer that it will become a permanent feature of our city for generations to come," Mr Hanney said.

"We encourage business owners to keep coming forward with ideas because we want to see our cafes, restaurants and retail stores thriving again. We will endeavour to do everything we possibly can to assist our businesses to reopen and begin trading once restrictions lift."

The push for outdoor dining in the CBD, suburbs and regional Victoria was modelled on New York's Open Restaurants initiative, which is credited with helping 9500 restaurants and cafes stay afloat during the COVID-19 pandemic.

The outdoor dining initiative comes as part of a $100 million city recovery fund, jointly paid for by the state government and the City of Melbourne, to bring life back to Melbourne's CBD.

Before Melbourne's rolling lockdowns took effect, almost 1 million people travelled into the CBD each day. In August, the city centre recorded a grim milestone as the number of pedestrians plummeted by 90 per cent.

With foot traffic mostly gone, the council estimates retail vacancy rates will rise from 3 per cent before lockdown to 7 per cent.

Premier Daniel Andrews on Tuesday said he was "very excited" about the potential for the precincts.

"It'll be done to such a high standard I think that it can be a feature of every summer where there's much more drinking and dining," he said.

"Whilst not for a moment saying there's an equivalence between space for 50 people outside and having your restaurant full, it's much better than being closed. It's much safer than everyone being inside and I think it will not just be here for the summer but it'll be here for the long term."

In other positive news for CBD retailers, Myer confirmed on Thursday it's iconic Christmas window displays would go ahead this year, a month after cancelling this year's showcase owing to COVID-19 constraints.

END_OF_DOCUMENT_TOKEN_TO_BE_REPLACED

END_OF_DOCUMENT_TOKEN_TO_BE_REPLACED
Recent Posts
We and our partners use cookies on this site to improve our service, perform analytics, personalize advertising, measure advertising performance, and remember website preferences.Ok