Militants use hidden tunnel to escape from high-security Israeli prison

Jerusalem: Six Palestinian militants have broken out of a high-security Israeli prison in what Prime Minister Naftali Bennett called a grave incident.

Israeli police and the military had started a search after the escape from Gilboa prison in northern Israel. 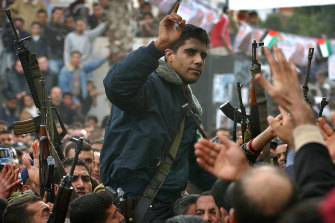 Zakaria Zubeidi, a former commander of Fatah’s Al Aqsa Martyrs Brigades, is one of the escapees.Credit:AP

Five of the fugitives belong to the Islamic Jihad movement and one is a former commander of an armed group affiliated with the mainstream Fatah party, the Prisons Service said.

Arik Yaacov, the service’s northern commander, said the escapees appeared to have dug a tunnel from under a sink in their cell toilet floor to access passages formed by the prison’s construction.

The facility, about 4 kilometres from the boundary with the occupied West Bank, is one of the highest-security jails in Israel and houses Palestinians convicted or suspected of anti-Israeli activities, including deadly attacks.

Four of the men were serving life sentences, a Palestinian prisoners organisation said.

“This great victory proves again that the will and determination of our brave soldiers inside the prisons of the enemy cannot be defeated,” said Fawzi Barhoum, a spokesman for the Islamist militant group Hamas.

Bennett’s office said he spoke with Israel’s internal security minister and “emphasised that this is a grave incident that requires an across-the-board effort by the security forces” to find the escapees.

A police spokesman said security forces believed the fugitives might try to reach the West Bank, where the Palestinian Authority exercises limited self-rule, or the Jordanian border some 14 kilometres to the east.

One of the escapees was identified by the Prisons Service as Zakaria Zubeidi, a former commander of Fatah’s Al Aqsa Martyrs Brigades in the West Bank city of Jenin. The brigades carried out deadly attacks against Israelis during a 2000-2005 Palestinian uprising.