More than 40 per cent of aged care staff across Australia are yet to have their first COVID-19 vaccination despite Prime Minister Scott Morrison saying in June that immunisation for nursing home workers was mandatory.

The failure to achieve blanket vaccination of aged care staff only one month before mandatory immunisation rules come in at nursing homes underscores the challenge of getting a good percentage of Australian workers vaccinated. 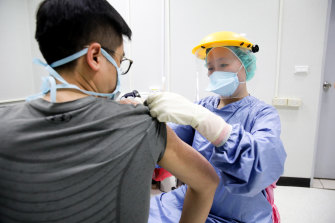 Aged care staff need to be vaccinated by September 17.Credit:Bloomberg

Mr Morrison this month released modelling showing vaccinated Australians would only be likely to avoid lockdowns when vaccination rates for adults got to 80 per cent.

The Department of Health on Monday emailed staff in aged care homes reminding them of the need to get vaccinated before September 17, when the mandatory rules will come in.

Western Australia, South Australia and Tasmania have put in place health orders requiring aged care staff to be vaccinated by September 17 but the larger eastern states are yet to do so.

Victoria is in the process of introducing its public health order, although there are concerns within the state health bureaucracy over who will check that homes are complying with the new rules once they are introduced.

A staff member from one company involved in administering vaccines to aged care staff, who asked not to be named so they could speak freely, said it was highly unlikely the workforce would be anywhere near fully vaccinated by mid-September.

Aged Care Minister Greg Hunt, who was approached for comment on Monday, said in February that the aged care workforce would be fully immunised by April. However, the scale of the task and an unwillingness by both Canberra and unions to mandate vaccinations for staff at that stage saw the promise fall by the wayside.

It emerged in late June that two-thirds of staff in aged care homes remained unvaccinated. Shortly after the Health Department revealed this figure, Mr Morrison and state premiers agreed that vaccination would become mandatory.

The announcement led to aged care providers and unions combining to say the government was trying to “blame shift” the failure to vaccinate staff onto workers and home operators. “It is government failures that have caused low vaccination rates,” they said in a statement.

“Providers and unions have been calling for fast action on vaccinating workers within the high-risk sector for at least six months, however, the government’s aged care vaccine program has too often led to disappointment, frustration, confusion and anger.”

The staff vaccine rollout has fallen so far behind that this month the federal government began offering special “vaccination payments” to GPs and other health providers prepared to set up at aged care homes to give out jabs to workers.

A spokeswoman for the federal health department said it was working directly with every residential aged care facility to ensure a plan was in place to vaccinate their workforce, either onsite or at a nearby vaccination hub.

“The department has escalated its communications with the sector since the announcement to make vaccination mandatory,” she said. “This includes working in close partnership with the unions and aged care peak industry groups.”

“We know from the Victorian wave last year that 84 per cent of residents of aged care facilities who caught COVID-19 caught it through aged care staff.“ There were 655 deaths in aged care homes in Victoria last year.

The group’s chief executive Sean Rooney said the states that had not yet brought in mandatory health orders needed to do so urgently because it would “assist aged care providers and the workforce understand the requirements and their obligations. These details are fundamental to identify who is included in the mandatory arrangements,” he said.

Sarah Russell, director of lobby group Aged Care Matters, said the failure to vaccinate aged care workers “is on the federal government – and on Greg Hunt specifically. In February, Minister Hunt announced that all staff and residents would be vaccinated by an in-reach vaccination workforce within six weeks. He did not honour his word.”