A Muslim spy who was executed by the Nazis at Dachau concentration camp in 1944 is the first Indian-origin woman to be honoured with a blue plaque.

Noor Inayat Khan, of Indian and US descent, served in the Special Operations Executive (SOE), which was set up by Sir Winston Churchill in 1940.

The English Heritage tribute will mark her London family home on Taviton Street in Bloomsbury.

The ‘unlikely’ spy was the first female radio operator to be flown into Nazi-occupied France in 1943 and was ‘Britain’s first Muslim war heroine in Europe’, English Heritage said. 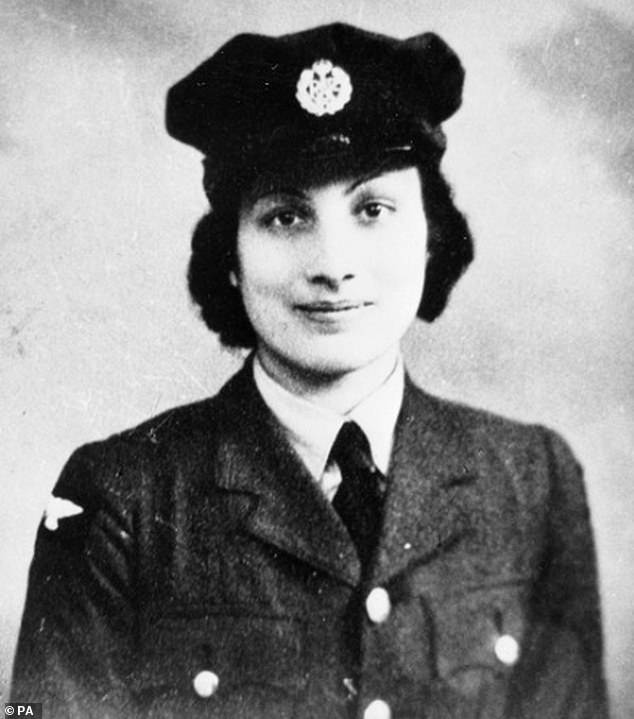 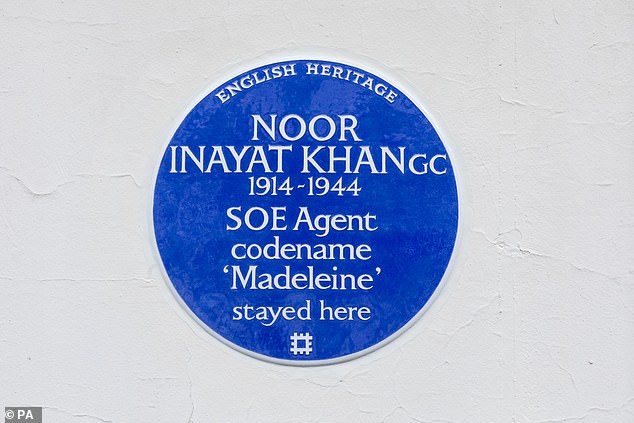 For three months, Khan single-handedly ran a cell of spies across Paris until she was betrayed and captured by the Gestapo.

Khan, whose codename was ‘Madeleine’, managed to escape from prison after her arrest, but was recaptured shortly afterwards.

She was tortured for information about SOE operations by the Gestapo for ten months, but she refused to reveal anything to her captors – not even her real name.

Shrabani Basu, Khan’s biographer, who is unveiling the plaque, said: ‘When Noor Inayat Khan left this house on her last mission, she would never have dreamed that one day she would become a symbol of bravery. She was an unlikely spy.

‘As a Sufi she believed in non-violence and religious harmony. Yet when her adopted country needed her, she unhesitatingly gave her life in the fight against Fascism. 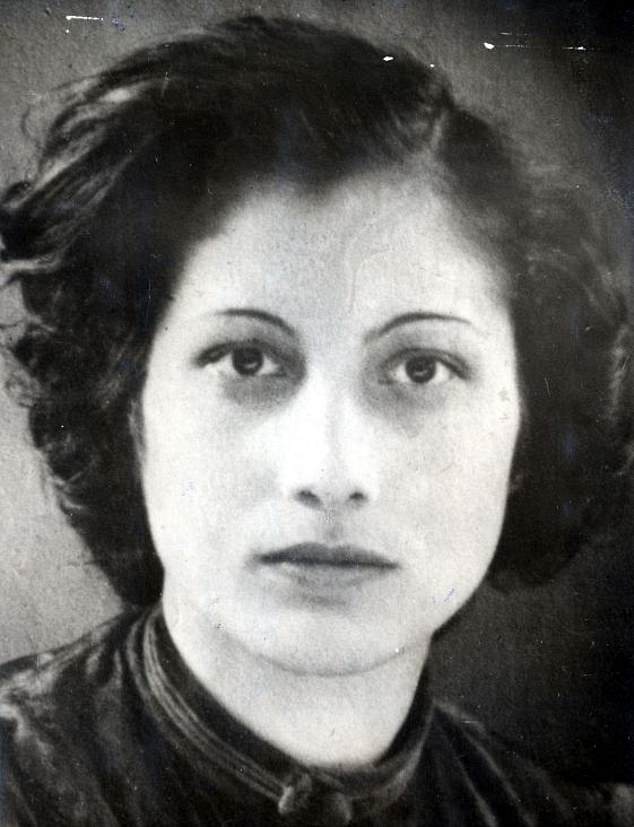 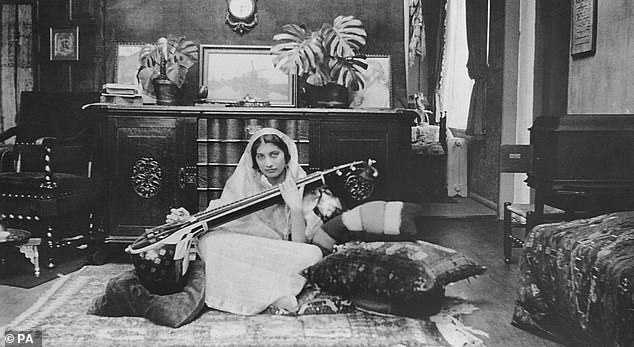 Khan, whose codename was ‘Madeleine’, single-handedly ran a cell of spies across Paris until she was betrayed and captured by the Gestapo

‘It is fitting that Noor Inayat Khan is the first woman of Indian origin to be remembered with a Blue Plaque. As people walk by, Noor’s story will continue to inspire future generations.

‘In today’s world, her vision of unity and freedom is more important than ever.’

The unveiling will take place at 7pm on Friday on English Heritage’s Facebook channel.

It will take place at the address that Khan scratched on the base of her feeding bowl to communicate with other prisoners, after being captured by the Gestapo.

Her biographer previously managed to get Khan’s bravery permanently recognised in England with a bronze bust in central London.

The bust was erected close to her family home and was the first memorial in Britain to either a Muslim or an Asian woman.

When campaigning for the bust, Shrabani Basu told the Independent: ‘I feel it is very important that what she did should not be allowed to fade from memory, particularly living in the times that we do. 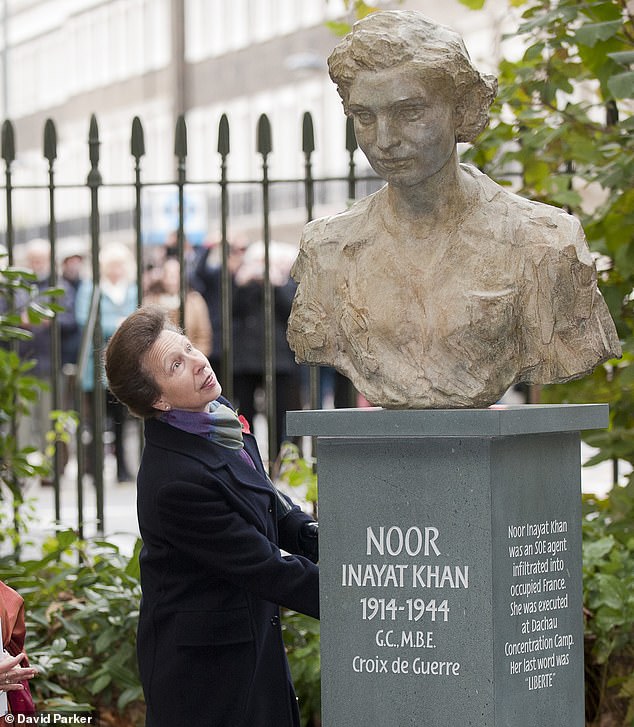 Khan’s biographer Shrabani Basu managed to get the spy’s bravery permanently recognised with a bronze bust, which was unveiled by Princess Anne in November 2012

‘Here was a young Muslim woman who gave her life for this country and for the fight against those who wanted to destroy the Jewish race. She was an icon for the bond that exists between Britain and India but also between people who fought for what they believed to be right.’

Khan was born on New Year’s Day 1914 in Moscow to an Indian father and an American mother.

She was a direct descendant of Tipu Sultan, the renowned 18th century Muslim ‘Tiger of Mysore’ who refused to submit to British rule and died in battle.

Her father, who was an Indian Muslim preacher, moved his family to London and then to Paris, where Khan was educated and later worked writing children’s stories.

After the fall of France to Nazi Germany, Khan and her brother Vilayat fled to England.

Despite having no loyalty to Britain, she joined the Women’s Auxiliary Air Force in November 1940.

Two years later, her quiet dedication and training in radio transmitting attracted the attention of the SOE and led to her being flown to France in June 1943. 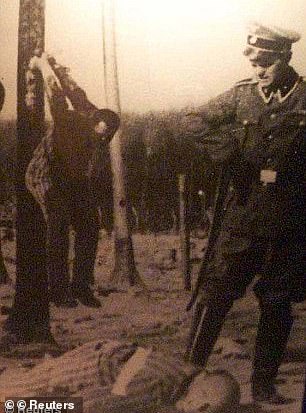 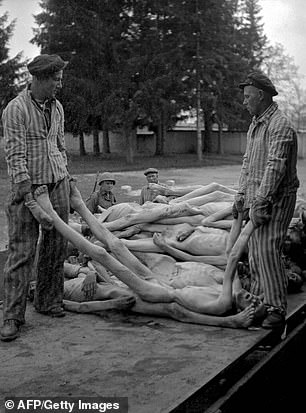 Khan was tortured by the Gestapo for ten months, but refused to reveal anything. She was executed at Dachau concentration camp (left and right) on September 13, 1944, aged just 30

There were doubts about her suitability for the role, but nonetheless she became the radio operator for the ‘Prosper’ resistance network in Paris, with the famous instruction to ‘set Europe ablaze’.

After many members of the network were arrested, Khan remained in France and, frequently changing her appearance and alias, she spent a summer moving from place to place, trying to relay messages back to London. 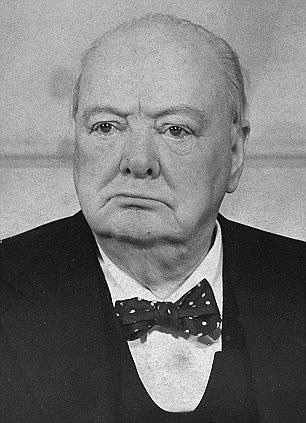 Noor Inayat Khan served in the Special Operations Executive, which was set up by Sir Winston Churchill in 1940

She was eventually betrayed by a Frenchwoman, supposedly the jealous girlfriend of a comrade, and was arrested by the Gestapo.

The Nazi secret police discovered that she had unwisely kept copies of all her secret signals and the Germans used her radio to trick London into sending new agents – straight into the hands of the waiting Gestapo.

In November 1943, she was sent to Pforzheim prison in Germany where she was kept in chains and in solitary confinement.

She was transferred to Dachau concentration camp in 1944 and was shot alongside three other female SOE agents.

Khan was posthumously awarded the George Cross in 1949 and the French Croix de Guerre.

The news of Khan’s plaque comes after English Heritage admitted the proportion of women celebrated by the scheme is ‘still unacceptably low’.

Only 14% of more than 950 London blue plaques celebrate women.

Plaques planned this year will include tributes to secret agent Christine Granville and artist Barbara Hepworth.

The charity said that ‘if we are to continue to see a significant increase in the number of blue plaques for women, we need more female suggestions’.

INCREDIBLE DECISION THAT COST OUR LAST SPY IN PARIS HER LIFE

Noor Inayat Khan was the last essential link between London and Paris after mass arrests by the Gestapo had destroyed the Special Operation Executive’s spy network in Paris.

Her position became so dangerous that her commanders urged her to return. She refused and it was a decision that was to cost Khan her life.

In November 1940, having fled France with her brother to fight Nazi tyranny, Khan joined the Women’s Auxiliary Air Force, and as an Aircraftwoman 2nd Class she was sent to be trained as a wireless operator.

She was recruited to join F (France) Section of the Special Operations Executive and although her superiors held mixed opinions on her suitability for secret warfare, her fluent French and her competency in wireless operation made her a desirable candidate.

On June 16, 1943, codenamed ‘Madeleine’ and under the cover identity of Jeanne-Marie Regnier, Khan was parachuted into Northern France. 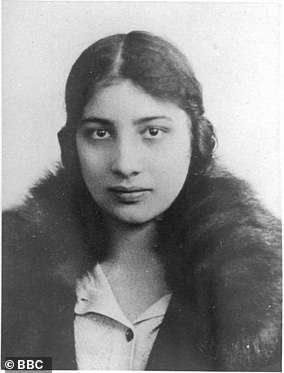 She travelled to Paris, and together with two other SOE radio operators, Diana Rowden and Cecily Lefort, joined the Physician network led by Francis Suttill.

During the six weeks immediately following her arrival, the Gestapo made mass arrests in the Paris Resistance groups to which she had been detailed. She refused to abandon what had become the principal and most dangerous post in France as she did not wish to leave her French comrades without communications and also hoped to rebuild her group.

Despite having a full description of her and deploying considerable forces in their effort to break the last remaining link with London, it was only her betrayal by a French woman that led to her capture by the Gestapo.

Khan was taken to their HQ where the Germans, now in possession of her codes and messages, asked her to co-operate. She refused and gave them no information of any kind.

While she was imprisoned in one of the cells on the fifth floor of the Gestapo HQ in Avenue Foch, she made two unsuccessful bids to escape. She was asked to sign a declaration that she would make no further attempts but refused and the Chief of the Gestapo obtained permission from Berlin to send her to Germany for ‘safe custody’.

Khan was sent to Karlsruhe in November 1943, and then to Pforzheim where her cell was apart from the main prison. She was considered to be particularly dangerous and uncooperative.

Finally Khan was taken with three others to Dachau concentration camp on the September 12, 1944, and on arrival was escorted to the crematorium where she was shot.

END_OF_DOCUMENT_TOKEN_TO_BE_REPLACED

END_OF_DOCUMENT_TOKEN_TO_BE_REPLACED
Recent Posts
We and our partners use cookies on this site to improve our service, perform analytics, personalize advertising, measure advertising performance, and remember website preferences.Ok