A NEIGHBOUR'S passive-aggressive note threatening to report another resident's barking dog has been mocked online – after they failed to identify themselves.

The note left on a doorstep in Coomera, Queensland claimed the dog's barking was "excessive" and threatened to "formally lodge complaints" if the owner failed to take action. 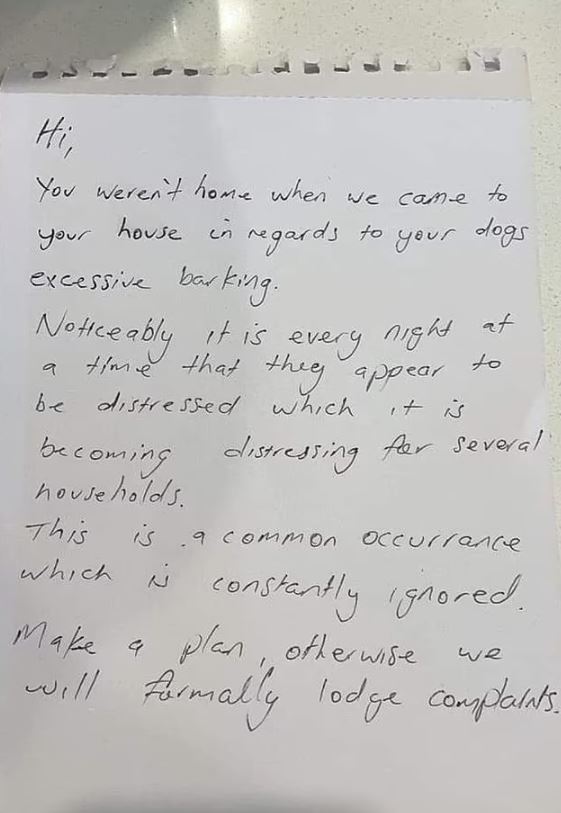 The note said: "It is every night at a time when they appear to be distressed – it is becoming distressing for several households.

This is a common occurrence which is constantly ignored.

Make a plan, otherwise we will formally lodge complaints."

But instead of taking action, the dog owner took to social media to mock the note- calling the message pointless as they did not leave a name or phone number.

"Thanks for the note, maybe next time leave your number and we can chat about it," the owner said.

"A bit hard to know my dog barks when I’m not home. And I’m pretty sure there are a lot of other dogs in the area that bark as well."

Social media users were torn on whether the note was appropriate – with one person commenting on the move as "gutless".

"I hate gutless anon notes like that," the user said.

"If it was me I’d want to know more so I could fix the issue but it’s a wee bit hard when there’s no number or anything."

However, others sided with the concerned neighbour and urged the dog owner to consider training their pet to bark less.

"Nice of them to write you a letter so now you know and can look into some desensitisation training," one said.

"Or maybe some stuff to keep your dog from being bored."

Recently, another disgruntled neighbour slapped an angry note on a farmer's fence for "unreasonable" smells coming from his fertilised fields – causing hundreds online to rally behind the farmer.

Facebook group Kernow Matters to Us posted a picture of the new neighbour's angry letter saying: "We naturally felt sorry for the farmer.

"He's lived in Cornwall all his life, as did his forefathers, and they've worked the land and kept the food chain going despite wind or weather, dry or rain, hot or cold."

Similarly, another person took to social media to mock their frustrated neighbour as they complained about his parking.

After making a fuss about him parking in the space for two weeks and threatening to get the council involved – the driver outwitted the complainer with his response.

He said: “I agree that it is annoying when there aren’t any spaces left in this car park, however that is the nature of a public car park and it’s something we all have to live with.