Delhi: India has ordered a crackdown on the religious sacrifice of animals in Kashmir, appearing to invite tensions in the majority-Muslim region days before one of Islam’s biggest holidays.

Animal welfare officials released an order for the end of the “illegal killing or sacrifice of cows, calves, camels and other animals”.

The directive to the Indian-administered part of the disputed territory came less than a week before Muslims mark Eid ul-Adha by offering prayers and slaughtering livestock. 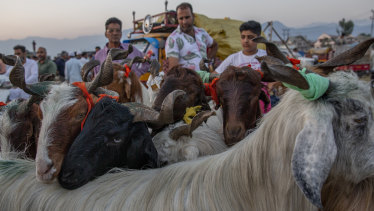 Goats huddle together as they are brought for sale at a market ahead of Eid al-Adha festival in Indian-controlled KashmirCredit:AP

Religious leaders in the region condemned the order and residents predicted widespread protests.

Sentiment against Indian rule has run deep in the contested Himalayan region for decades. Many Muslims seek either independence or unification with Pakistan, which controls the other part of the region.

Tensions increased in 2019 when Delhi revoked the region’s semi-autonomy. Narendra Modi, the Indian prime minister, has been accused of trying to alter its demographics by increasing the proportion of Hindus. Elsewhere in India, his ruling Bharatiya Janata Party party has been accused of whipping up violence against minority groups. 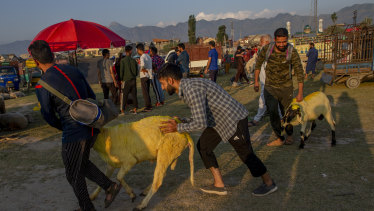 India has ordered a crackdown on the religious sacrifice of animals in Kashmir, appearing to invite tensions in the majority-Muslim region.Credit:AP

“Delhi is interfering in our religion,” Bashir Ahmad Thoker, who lives in the northern Baramulla district of Kashmir, said. “Sacrificing animals is mandatory for Muslims on Eid, but Delhi wants to implement a Hindu nationalist agenda in Kashmir.”

Abdul Razaq, from Srinagar, said: “We would prefer to die defending our religion, rather than accept this diktat.”

The Muttahida Majlis-e-Ulema group of clerics urged Delhi to “revoke this arbitrary and discriminatory order”. The holiday runs from Wednesday to Friday next week. 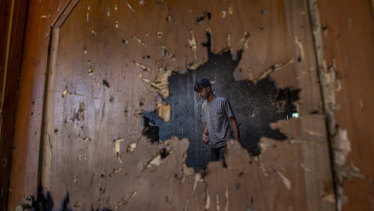 Kashmir has been a scene to violence before. Here a Kashmiri man inspects a house with a hole created by a mortar shell fired by government forces during a gunfight, in Srinagar, Indian-controlled Kashmir in February.Credit:AP

Cows are considered sacred in Hindu-majority India, and slaughtering them is illegal in much of the country. Since Mr Modi took power in 2014, a series of mob attacks by so-called cow vigilantes from extremist Hindu groups have targeted Muslims, who make up 14 per cent of India’s nearly 1.4 billion people. The victims have been accused of smuggling cows for slaughter or carrying beef. At least two dozen have died.

One political analyst, who asked not to be named for fear of reprisals, suggested the BJP wanted to inflame Muslim violence to bring out the Hindu vote in upcoming state elections.

Gowhar Geelani, another analyst, said: “Banning the sacrifice of animals on Eid-ul-Adha is a message that neither the sentiments nor the religious freedoms of the Muslim community in Kashmir matters.”