Australia’s first commercial-scale green hydrogen refuelling station is being developed on a site in Melbourne’s west and backers say it will be the first in a network to power vehicles all the way to Sydney.

The $10 million project in Truganina will be powered by 100 per cent renewable energy, says Hydrogen Fuels Australia, the company developing it. The refuelling station will have an on-site 600-kilowatt solar array and tanks to collect rainwater that will be used to produce the hydrogen. The entire project will be off-grid except for a sewage connection. 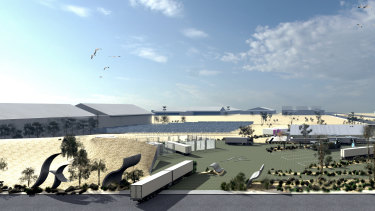 An artist’s impression of the planned green hydrogen refuelling station in Truganina.

The water and heat created as a byproduct of the process will be used to grow produce in a greenhouse.

“Right now it’s not about price; it’s to meet environmental targets,” he said. “The market is not there yet – we are building the market. There’s definitely an appetite for green hydrogen, but we need to have the infrastructure.”

Hydrogen Fuels Australia has bought an electrolyser from Denmark and hydrogen dispenser from Sweden, which will create the hydrogen at the Truganina site. It expects to start producing small amounts of hydrogen in the third quarter of next year.

There is a growing interest in the role of hydrogen, which burns cleanly and emits only water, in decarbonising the transport industry to reduce greenhouse gas emissions.

It is created via electrolysis, a process that uses an electrolyser to send an electric current through water to split the “H₂” from the “O”. When renewable energy is used to power the electrolyser, the end product is emissions-free.

Australian billionaire Andrew Forrest has been on a high-profile publicity blitz supporting a green hydrogen future, and pledging to produce 15 million tonnes of green hydrogen by 2030.

While hydrogen remains an expensive fuel to produce and is not yet competitive with diesel, Mr Ceravolo said there was demand from corporations and local and state governments that needed to meet decarbonisation commitments. 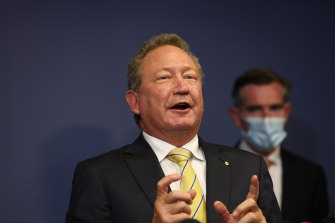 When the Truganina site is at full production, it will be able to make 3000 kilograms of hydrogen a day – enough to refuel hundreds of trucks, buses and cars.

This green hydrogen would cost about $10 a kilogram. A passenger car would need about six kilograms to travel 600 kilometres.

At the nearby Toyota plant in Altona, a hydrogen demonstration project is being developed as part of the Zero Emission Centre of Excellence, which will eventually host a commercial-scale hydrogen-vehicle refuelling station. Not all the hydrogen used at this site will be green.

The Grattan Institute’s energy and climate change director, Tony Wood, said the future role of hydrogen was still uncertain and government policy should support trials. Many aspects of this emerging industry were still unregulated, he said.

“I’m intrigued that a company is prepared to put their own money into this because there’s a lot of risk involved,” he said. “But it’s likely that hydrogen will be the way that heavy vehicles go and someone will have to build refuelling stations at major truck stops.”

In May, the Australian Renewable Energy Agency announced it would provide $100 million in funding for hydrogen projects in Western Australia and Victoria.