NHS app will show proof of a third vaccination

The NHS app is being updated to show proof of booster jabs.

It will soon appear on the travel section of the Covid pass, potentially helping Britons in countries where it is required.

It may also make it easier for the UK Government to make the third jab compulsory in domestic circumstances, The Times reported. 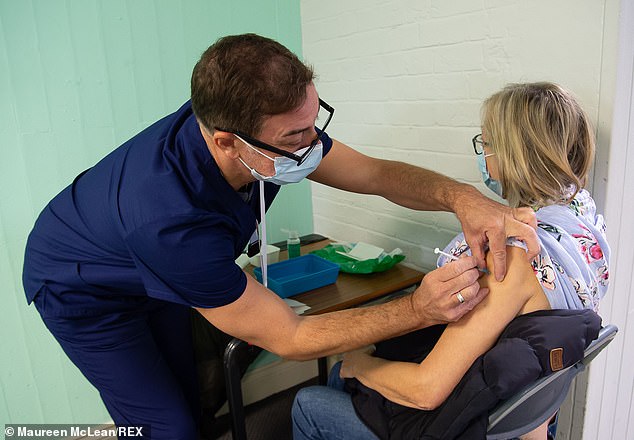 The NHS app is being updated to show proof of booster jabs. Pictured: A woman is given a booster jab in Windsor, England on Monday

Boris Johnson warned on Monday that the concept of full vaccination would need to be adjusted – with a third jab becoming part of it.

Almost 14million Britons have had the booster but the goal is to administer 40million to people over the age of 40.

Countries including Austria and Israel are now requesting proof of boosters for arrivals vaccinated many months ago.

France has indicated that proof of a third jab will be required for over-65s to access most venues from December 15.

Meanwhile it has emerged that more than half of government emergency planners were tied up preparing for a No Deal Brexit just before Covid struck.

Only limited time remained to be spent on other plans, according to the National Audit Office.

The watchdog also warned that lessons had not been learned from previous health emergencies such as swine flu.