Nine in 10 police officers have been assaulted on duty, report reveals

Nine in 10 police officers have been assaulted on duty with more than third attacked in the last year, report reveals amid surge in violence against PCs fuelled by Covid coughing incidents, BLM protests and illegal raves

Almost all police officers have been assaulted during their careers and more than a third were attacked in the last year, a landmark report has revealed.

Research from the National Police Chiefs’ Council (NPCC) involving 40,000 officers has been released at a time when frontline constables are facing a surge in violence.

It found that 88 per cent of officers have suffered assault while on duty, including 39 per cent who were attacked in the past 12 months.

And 34 per cent of officers said their personal safety training was inadequate, prompting the launch of a national curriculum to ensure standards across all 43 forces.

A variety of other wide-ranging measures have also been recommended, including tighter laws surrounding suspects who spit at police.

But the federation representing rank and file officers has said the findings must be acted upon to stop the report becoming ‘just another door stop’ when the threat to constables remains present. 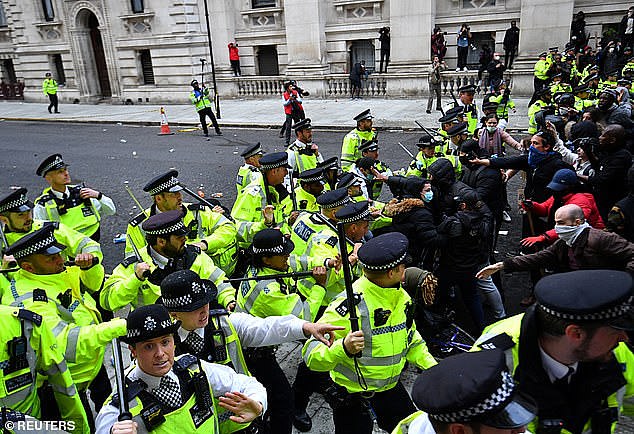 A 31 per cent year-on-year jump in assaults on officers in July is believed to have been fuelled by PCs manning protests (pictured in London), breaking up illegal raves and being spat on 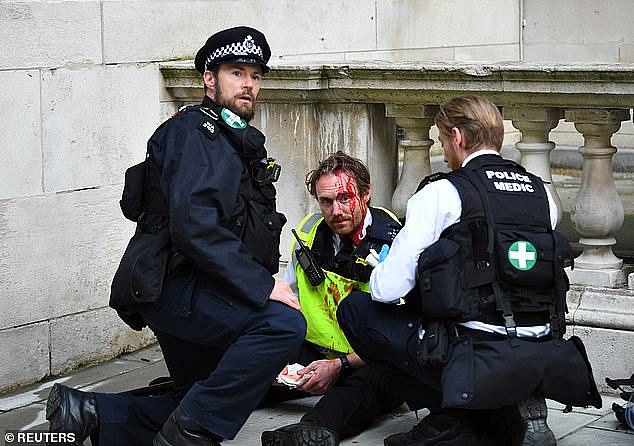 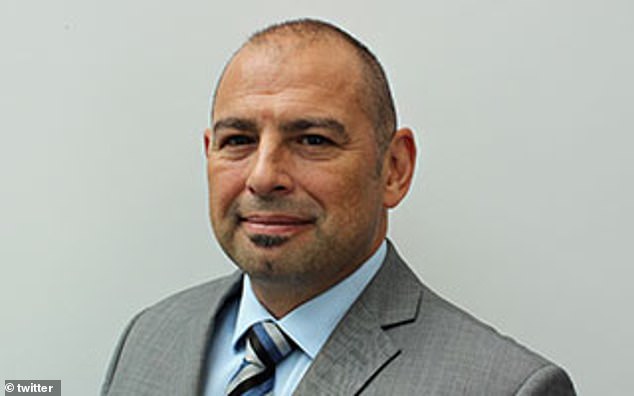 Che Donald, vice chairman of the Police Federation of England and Wales, which represents more than 120,000 officers said he hoped the report would not become ‘just another door stop’

Three-quarters of police officers want daily access to a Taser despite chiefs warning that the stun guns are no guarantee of safety and amid concerns over racial disparity in their use.

Nearly all officers said they thought more frontline staff in their force should be given the devices, while similar proportions said they should all at least have the option of carrying stun guns.

Emergency workers continue to come under siege while on duty and a recent spike in police-targeted violence has been blamed on coronavirus.

A 31 per cent year-on-year jump in assaults on officers in July is believed to have been fuelled by PCs manning protests, breaking up illegal raves and being spat on.

June was memorable for Black Lives Matter demonstrations in London, which saw clashes with police that left constables injured.

One striking picture showed medics outside Downing Street tending to an officer with blood pouring from his head.

The report was commissioned by NPCC chairman Martin Hewitt last autumn following a series of serious attacks on officers.

He said: ‘In this review, we have followed the evidence, listened to the concerns of those within the service, and heard the views of the public.

‘The review and the breadth of its recommendations show that there is no one piece of equipment that is the answer to all violent and threatening situations.

‘Instead, chief constables have agreed a broad package of measures that will significantly enhance the safety of our brave and hard-working front line.’

Part of the review’s recommendations is a national curriculum and guidance for contact time with trainers.

Some forces in England and Wales currently offer 16 hours training per year, with others only providing four, while some include first aid and fitness tests as part of the curriculum.

The NPCC has called for a number of changes in the law as part of its report, which was published on Wednesday.

It wants a specific offence of targeting an officer with a vehicle to be created, as well as tighter laws around the possession of ammonia and similar corrosive liquids.

As part of the review, the council has also called for spitting and hate crimes to be considered as aggravating factors when suspects are brought to court for attacking officers.

Attacks on police are on the rise, figures suggest

Police chiefs have blamed the wave of violence on coughing and spitting incidents related to coronavirus, unrest at protests, and illegal raves.

Provisional data from all 43 forces in England and Wales showed a 24 per cent rise in attacks in the four weeks to June 7 compared with the same period last year.

In July there was a 31 per cent year-on-year jump in assaults on officers.

The NPCC wants suspects who spit at police to be forced to give a blood sample to test for disease, and spit guards issued to all officers if supported by local risk assessments.

Chief constables are also grappling with how many officers to issue with Tasers, with strong support among the rank and file.

The review showed that 76 per cent of police officers and 85 per cent of specials want to deploy with Tasers every day.

However NPCC safety lead Alan Pughsley stressed that officers should not become over-reliant on the devices and they are no guarantee of safety.

The body has also commissioned research into why black, Asian and minority ethnic suspects are more like to be Tasered.

Che Donald, vice chairman of the Police Federation of England and Wales, which represents more than 120,000 officers, said: ‘There are many good points raised in this review, with much good work already in play.

‘However, chief officers must now take swift action to implement all immediately, so they are meaningful, make a tangible difference and are directly felt by officers on the ground.

‘This review must not become just another door stop and be forgotten about a year down the line. That would mean letting down my colleagues even further.

‘Along with the majority of the public, the federation is appalled by the atrocious levels of violence colleagues have faced recently and has been demanding action.

‘That’s why we welcomed this review and want to see its findings make a real difference.’

Two in five police officers killed on the road were travelling between work, research finds

More than two in five police officers killed between 2008 and 2019 died while travelling to or from work, research has shown.

A major review of officer safety by the National Police Chiefs’ Council (NPCC) said the finding ‘could not be ignored’.

The NPCC is carrying out further research into any links between shift work and road accidents.

The report said: ‘While the primary focus of the OSSR (officer and staff safety review) was to reduce the number and severity of assaults faced by our officers and staff, this finding could not be ignored.

‘To that end, this review recommends a number of measures intended to reduce the number of road-related fatalities.

‘These include the commissioning of research to examine the link between shift work and safe driving practices.’

The review showed that of 92 officers who died between 2008 and 2019, 39 were killed in road accidents while commuting to or from work.

Kent Chief Constable Alan Pughsley, NPCC lead for officer safety, said: ‘We are doing a huge review on this to understand health and safety-wise, shift pattern or any other element that may or may not contribute to it.’

National vice-chair of the Police Federation of England and Wales Che Donald said fatigue could be a factor in the accidents.

He said: ‘Losing colleagues under any set of circumstances is tragic but seeing such a worryingly high number of officers losing their lives whilst commuting to or from work sets alarm bells ringing.

‘There may be multiple factors behind the reasons why, but it is likely fatigue would have played a part in many of these cases and officers have told us they feel their levels of fatigue poses a risk to their safety.

‘The safety of police officers is absolutely paramount, and the Federation will continue to work with policing leaders as this vital piece of research to pinpoint the causes is carried out to help prevent further loss of life.’

END_OF_DOCUMENT_TOKEN_TO_BE_REPLACED

END_OF_DOCUMENT_TOKEN_TO_BE_REPLACED
Recent Posts
We and our partners use cookies on this site to improve our service, perform analytics, personalize advertising, measure advertising performance, and remember website preferences.Ok