North Korea fires ANOTHER missile into the sea

North Korea fires ANOTHER missile into the sea, hours after sparking terror in Japan when long-range missiles sent people fleeing to bomb shelters

North Korea has test-fired another missile into the sea just hours after sparking terror in Japan.

It takes the total number of missiles fired today to at least four, although the rockets failed mid-flight and dropped into the ocean, South Korea has said.

Sirens sounded in Miyagi, Yamagata and Niigata prefectures early Thursday after the missile was launched near the North Korean capital Pyongyang and looked set to fly over the northern end of Japan’s main island, with people fleeing to bomb shelters.

But Tokyo and Seoul said they lost track of the rocket – presumed to be a new kind of intercontinental ballistic missile – over the Sea of Japan, suggesting it broke apart mid-flight. North Korea also fired two short-range missiles that landed in the sea.

Had the ICBM failed over Japanese territory then it could well have struck an inhabited area and sparked a major crisis. Japanese Prime Minister Fumio Kishida called the launch ‘absolutely intolerable’ and lodged a protest with the North.

It is just the latest in a series of highly provocative missile tests carried out by Kim Jong-un’s regime that the US says could end with a nuclear test. On Wednesday, Kim test-fired 25 missiles including one that crossed the ocean border with South Korea. 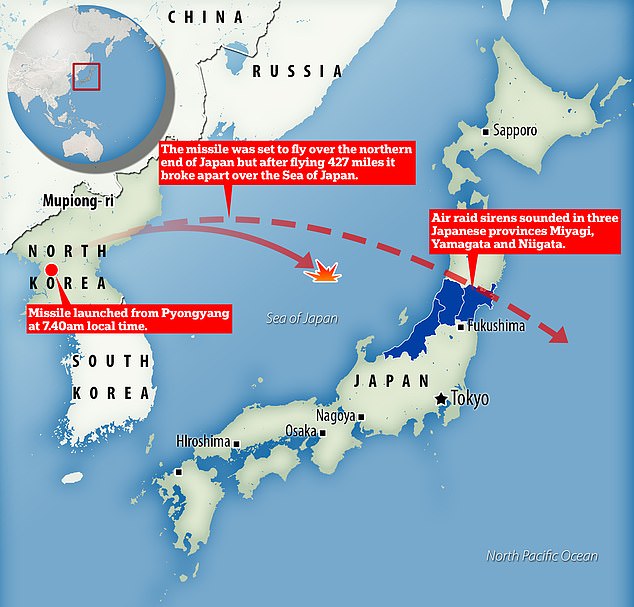 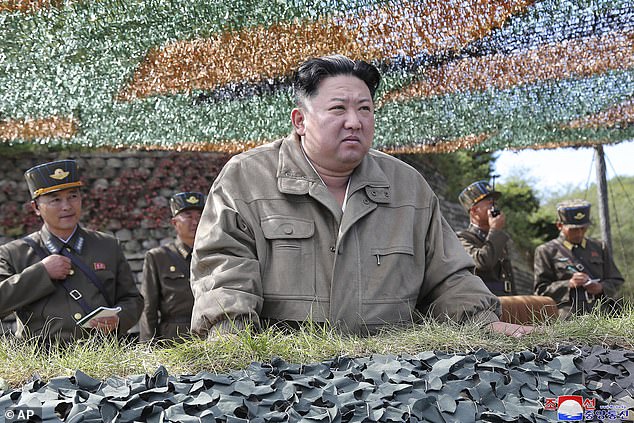 Wednesday’s launches – involving a mixture of short-range missiles – were the most carried out by North Korea in a single day ever.

Seoul responded by firing three air-to-surface missiles back across the maritime border that landed near North Korean territorial waters.

Pyongyang is furious at joint US-South Korean war games taking place on its borders which it says are rehearsals for an invasion.

Washington and Seoul have denied that, saying the drills are defensive and designed to deter Pyongyang. On Thursday, the allies said the exercises – which were due to end Friday – have now been extended to an indefinite date.

The two shorter-range missiles that North Korea tested were fired from Kaechon and flew around 200 miles before crashing down into the Sea of Japan.

Japan’s Defense Minister Yasukazu said one of the North Korean missiles reached a maximum altitude of 2,000km (1,200 miles) and flew about 750km (460 miles).

The Japanese government initially said at least one of the missiles flew over its northern territory but later revised its assessment, saying there were no overflies.

The office of Prime Minister Fumio Kishida issued warnings to residents in the northern prefectures of Miyagi, Yamagata and Niigata, instructing them to go inside firm buildings or underground.

There have been no reports of damage or injuries from areas where the alerts were issued.

Bullet train services in those regions were temporarily suspended following the missile alert before resuming shortly.

Kishida condemned the North’s launches and said officials were analyzing the details of the weapons.

One of the more than 20 missiles North Korea shot on Wednesday flew in the direction of a populated South Korean island and landed near the rivals’ tense sea border, triggering air raid sirens and forcing residents on Ulleung island to evacuate.

South Korea quickly responded by launching its own missiles in the same border area.

Those launches came hours after North Korea threatened to use nuclear weapons to get the US and South Korea to ‘pay the most horrible price in history’ in protest of ongoing South Korean-US military drills that it views as a rehearsal for a potential invasion.

North Korea has been ramping up its weapons demonstrations to a record pace this year.

It has fired dozens of missiles, including its first demonstration of intercontinental ballistic missiles since 2017, as it exploits the distraction created by Russia’s war in Ukraine and a pause in diplomacy to push forward arms development and dial up pressure on the US and its Asian allies.

The North has punctuated its tests with an escalatory nuclear doctrine that authorizes preemptive nuclear attacks over a variety of loosely defined crisis situations.

US and South Korean officials say North Korea may up the ante in the coming weeks with its first detonation of a nuclear test device since September 2017.

US Secretary of State Antony Blinken held a telephone call with South Korean Foreign Minister Park Jin over Wednesday’s missile launches, including the one that ‘recklessly and dangerously’ landed near the South Korean coastline, and stressed the ‘ironclad’ US commitment to the security of its ally, according to their offices.

State Department spokesperson Ned Price also addressed concerns about possible North Korean preparations for another nuclear test, which would be its seventh overall.

Experts say such tests could possibly bring North Korea a step closer to its goal of building a full-fledged arsenal threatening regional US allies and the American mainland. 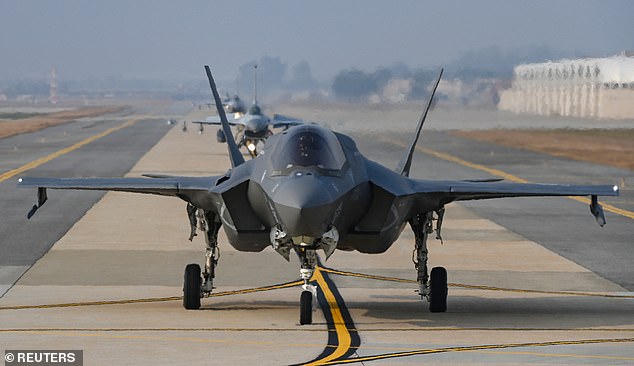 ‘Should it go forward with a seventh nuclear test there would be additional costs and consequences,’ Price said, noting that the test would be a ‘dangerous, reckless, destabilizing act.’

North Korea last flew a missile over Japan in October in what it described as a test of a new intermediate range ballistic missile, which experts say potentially would be capable of reaching Guam, a major US military hub in the Pacific.

Experts say North Korea is escalating a brinkmanship aimed at forcing the US to accept the idea of the North as a nuclear power and negotiating economic and security concessions from a position of strength.

Nuclear talks between Washington and Pyongyang have been stalled since early 2019 over disagreements in exchanging the release of crippling US-led sanctions against the North and the North’s denuclearization steps.

White House National Security Council spokesperson John Kirby on Wednesday underscored that the Biden administration has repeatedly sought to reach out to North Korean officials through diplomatic channels and has made clear ‘we’re willing to sit down with North Korea without precondition to discuss the denuclearization of the peninsula.’