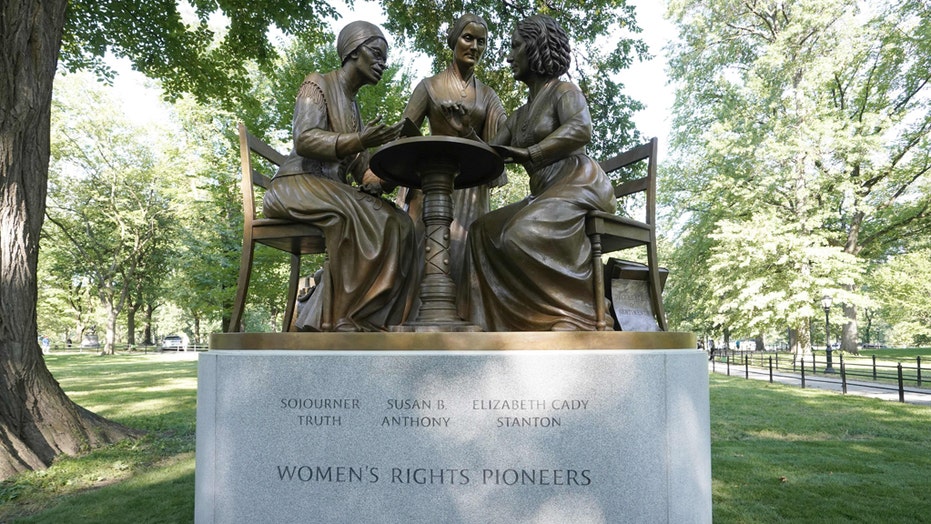 The first-ever statue in New York City's Central Park to portray real women was unveiled Wednesday on the 100th anniversary of the 19th Amendment’s ratification.

WHAT IS THE 19TH AMENDMENT?

Sculpted by Meredith Bergmann, the installation at the famous park's Literary Walk was the culmination of a seven-year effort by nonprofit organization Monumental Women.

According to Forbes, there are currently 23 statues of real men in Central Park. Only fictional women had been shown to parkgoers previously, however: They included Alice in Wonderland, Mother Goose, and Juliet from William Shakespeare's epic love story "Romeo and Juliet."

Additionally, there were reportedly just five public statues of real women throughout the Big Apple, with 150 statues of historical figures in total.

The Smithsonian has reported that only 10% of outdoor statues throughout the U.S. depict figures are of historic women.

Organizers for the event said Wednesday they had received donations from over 1,000 supporters to fund the statue, including from Girl Scouts of the United States of America.

“A knowledge of women’s history helps us understand the context of the struggle for equality, as well as the continuum of the fight for social change,” said Monumental Women board president Pam Elam. “We rethink the past to reshape the future.”

Former Secretary of State Hillary Clinton underscored that message: “There is nothing more important to honor the women in this statue than to vote," she told attendees.

Statues throughout the nation have often become a point of contention for cities struggling under the weight of their own history — especially Confederate history in the South.

Because of the renewed scrutiny, Monumental Women has created its own national education campaign as well as a planned women's history walking tour of New York City to help provide what Elam says is a "full and fair historical record that reflects and respects the contributions of all women and people of color."

END_OF_DOCUMENT_TOKEN_TO_BE_REPLACED

END_OF_DOCUMENT_TOKEN_TO_BE_REPLACED
Recent Posts
We and our partners use cookies on this site to improve our service, perform analytics, personalize advertising, measure advertising performance, and remember website preferences.Ok