New surveillance video shows the moment gunmen opened fire on a Bronx street during a wild shootout between two groups.

The footage, released by the NYPD on Sunday, shows three people walking down the street near Warring and Matthews avenues shortly after 10 p.m. June 13 when they quickly duck behind parked cars and open fire — apparently after being fired on by another group of men.

Two of the men are seen shooting back wildly while the third ducks behind one of the cars. 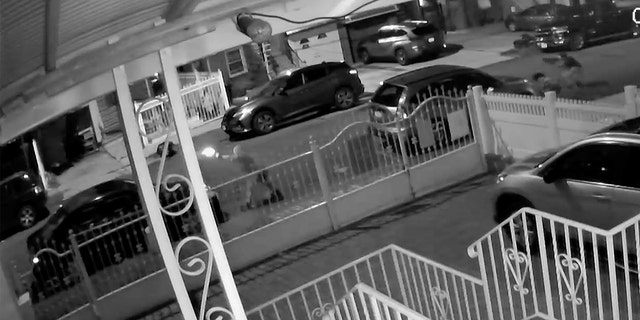 All three are seen running off in the video.

Police said there were no reports of injuries in the exchange but they’re asking the public for help to identify the three suspects.

The barrage of bullets did strike a nearby home and two of the parked cars.

Cops also released photos of four people believed to be tied to the incident.

The NYPD is asking anyone with information to contact Crime Stoppers at 1-800-877-TIPS or at http://www.nypdcrimestoppers.com.