An Old Master painting worth hundreds of thousands of pounds has been discovered in the attic of a MasterChef judge’s family home.

The work, by 18th Century Venetian artist Giovanni Battista Tiepolo, is valued at between £150,000 to £250,000, but is expected to reach higher figures due to the popularity of Tiepolo’s Punchinello series and the Italian muse’s global following.

The painting was found by descendants of writer and poet Dame Edith Sitwell, whose brother, Osbert Sitwell, purchased the piece in the great Henry Oppenheimer sale at Christie’s auction house in 1936.

Osbert Sitwell is the great uncle of MasterChef judge William Sitwell, and was found as they were clearing out the attic of their family seat of nearly 300 years. 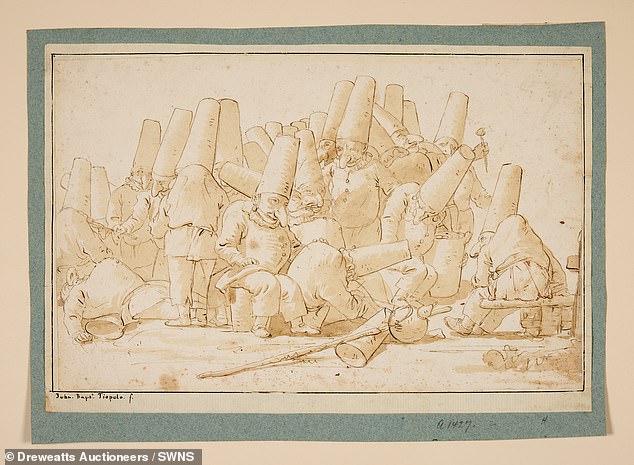 The work is by 18th Century Venetian artist Giovanni Battista Tiepolo, and is expected to go higher than its value of around £150,000 to £250,000 because of the Italian muse’s global following

Now the painting is to go under the hammer as part of a two-day auction of the contents of Grade II listed manor house Weston Hall in Northamptonshire.

Henrietta Sitwell, William’s sister, said: ‘The drawing was purchased by my great uncle Osbert Sitwell in the great Henry Oppenheimer sale at Christie’s in 1936.

‘No one seemed to know where it was, or even give it a second thought until one day last year when we were sorting through the many attics of Weston. We found it wrapped in bubble wrap, leaning against the wall.

‘As I peeled back the wrapping, I instantly recognised it as something special, having studied the history of art at university. 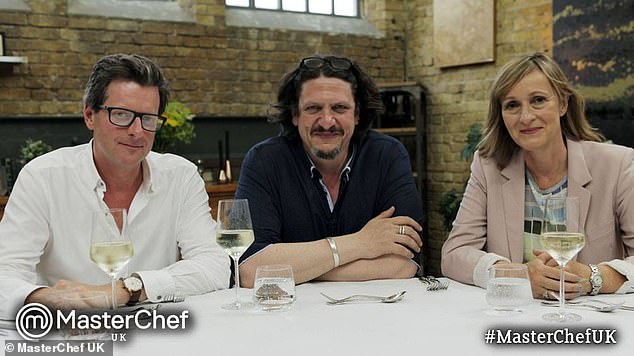 ‘This Tiepolo drawing is one of many exciting discoveries made in the attics of Weston Hall and it was thrilling to think that such a captivating and important work of art by such a revered Old Master was just lying there gathering dust over the years.’

The work featured hook-nosed, humpbacked clowns who were one prominent figure in Commedia dell’Arte, which was an early form of professional theatre, performed during the 16th century before becoming popular across Europe.

The funny-looking creatures, known as ‘Punchinello’, fascinated Tiepolo who spent his career illustrating their binge drinking and passing out from inebriation after greedily gorging on feasts. 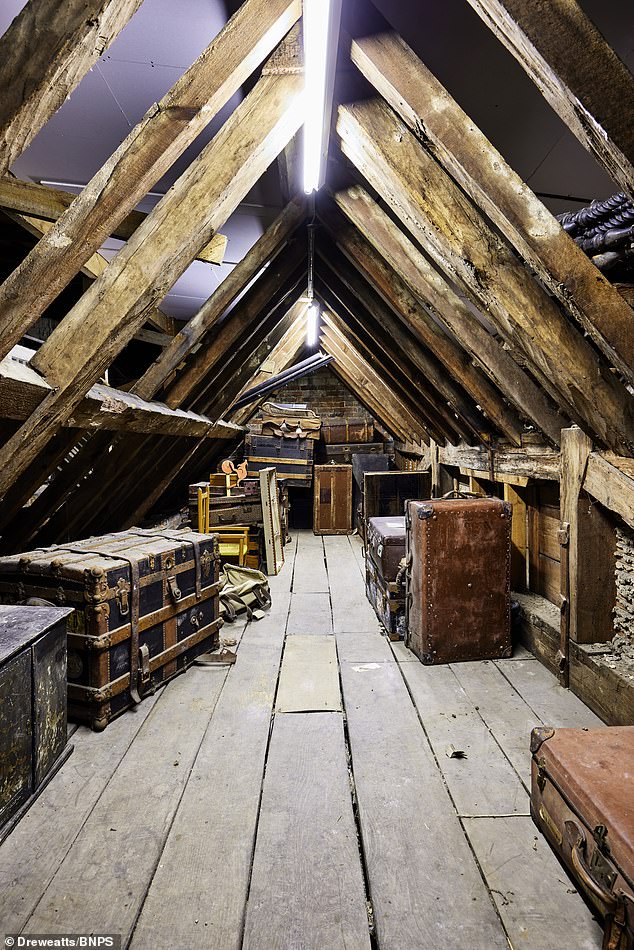 The 18th Century painting was found in the attic of  Grade II listed manor house Weston Hall in Northamptonshires, the Sitwell’s family seat of 300 years

The Sitwell’s painting was one of 104 amusing paintings inspired by the Verneri Gnocolar, a tradition in Verona on the last Friday of Carnival, where plates of gnocchi, wine, and polenta were given out to the crowds in the main square by ‘Papà del Gnoco’.

The artist’s mischievous depictions of Punchinello became the inspiration behind Punch, half of the British puppet comedy duo, Punch and Judy.

Dreweatts was appointed to sell the contents of Weston Hall after its current owner, renowned food critic and MasterChef judge William Sitwell, decided to put the high society home on the market.

Coming complete with a tennis court, a swimming pool and 49-acres of lavish gardens and woodland are all part of the society family’s home which is up for sale for a sweet £3.25million.

Organisers of the sale hope that the event highlights the history of the eminent family of esteemed writers, eccentrics, pioneers, and creatives through the centuries.

Speaking last year when his ancestral family home went up for sale, William, 52, said: ‘Given my personal attachment to Weston Hall, and my family’s link to the property since 1714, saying goodbye is terribly sad and a wrench, but whoever the future owner is will find that it’s wonderful in so many ways. 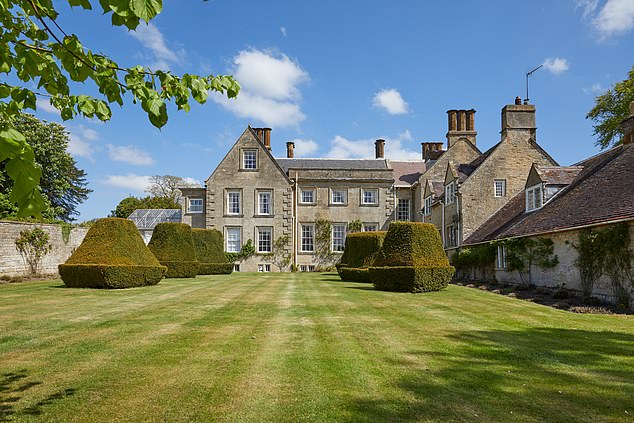 Weston Hall has been in the Sitwell family since 1714 and went up for sale last year for £3.25million with estate agents Knight Frank, featuring 49-acres of garden and woodland 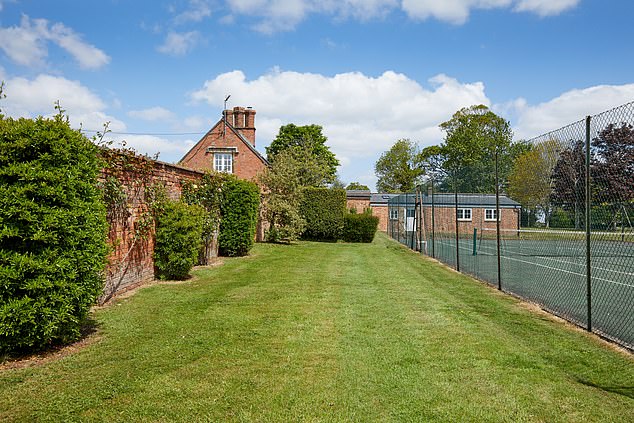 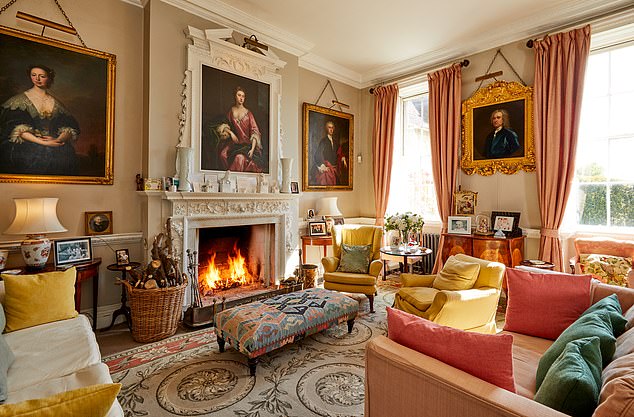 Writer and MasterChef critic Sitwell said of the sale of his beloved home: ‘It’s not just the four walls of bricks and mortar on offer to the buyer, there is also a wonderful spirit and atmosphere to the place – which I’m sure will be cherished by the future owner.’ 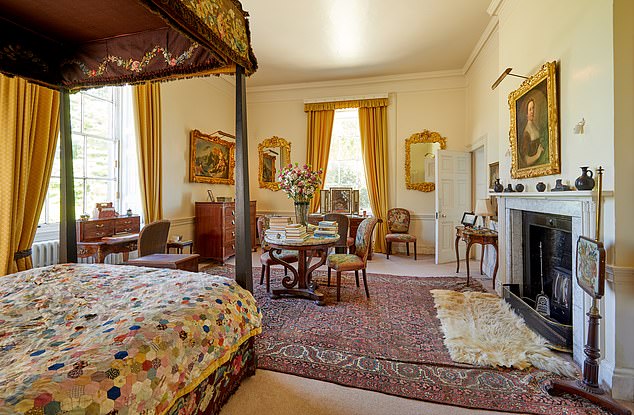 Weston Hall features a variety of rooms that capture English social history – including an 18th-century library, a 17th-century Justice Room and a vibrant dining room painted purple by William’s mother

‘It’s the perfect house because it’s not too big and not too small, with a beautiful garden, and accessible to London in not much more than an hour despite its remote and rural location.

‘It’s not just the four walls of bricks and mortar on offer to the buyer, there is also a wonderful spirit and atmosphere to the place – which I’m sure will be cherished by the future owner.

‘As well as being a treasure trove of English social history, Weston Hall has an amazing local community and a pub only 30 seconds away. If it were not for our financial set up, I would stay at Weston Hall forever, because it is paradise.’

Joe Robinson, Head of House Sales and Private Collections at Dreweatts, said: ‘The re-discovery of the work by Tiepolo has probably been the most important find of the auction and we are delighted to be offering it for sale for the first time in over 80 years.

‘Walking through the attics was like uncovering an Egyptian tomb, with wonderful things emerging from layers of dust.

Who is MasterChef critic William Sitwell? 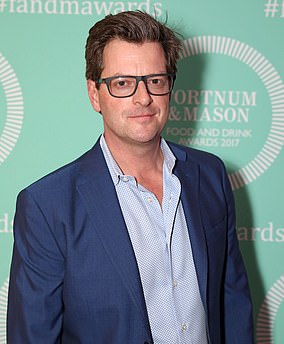 William Sitwell at the fifth annual Fortnum & Mason Food and Drink Awards on May 11, 2017 in London

William Sitwell, who has appeared on the BBC’s MasterChef as a food critic, is the former editor of Waitrose Food magazine and a great-nephew of avant garde poet Dame Edith Sitwell.

Four years ago William separated from his first wife, society girl Laura McCorquodale, by whom he had two children, in favour of Emily Lopes, daughter of the late Devonshire race-horse breeder the 3rd Lord Roborough.

They married in 2017 and called Weston Hall their home.

Emily’s cousin, Harry Lopes, is married to Laura Parker Bowles, daughter of the Duchess of Cornwall.

William’s brother George used to live at Weston with Martha de Blank, daughter of late gastronome Justin de Blank, after marrying her in 2007, but Martha walked out five years later.

The Sitwells were once among the most celebrated of British society families, with their much-loved Northamptonshire manor house proving to be the perfect place to host glamorous parties.

‘It is so rare for a collection with such history and breadth to come to the market and I feel privileged to be involved in the unveiling of a true piece of forgotten history.’

The late, great Sitwell was known for shocking society with her eccentric behaviour and fashion sense during the infamous Boho era of the ‘Bright Young Things’ in the 1920s.

Some parts of the manor house have been left untouched, transforming the building into a treasure trove of discoveries that illustrated the rich heritage of Weston Hall through the ages.

Described by Dreweatts as a ‘veritable time capsule of British history’, Weston Hall has an eighteenth-century library, a Justice Room dating back to the nineteenth century, and a Victorian conservatory.

William Sitwell continues the family’s literacy legacy through his work as a writer and restaurant critic and has commented that the sale took him on a wonderful journey of discovery by exploring into rooms he hadn’t ventured into before.

Mr Sitwell said: ‘This sale offers countless individuals and collectors the chance to own items and collections that are part of the fabric of English history.

‘It’s extraordinarily diverse, representing the wide interests and experiences of my family and our ancestors. 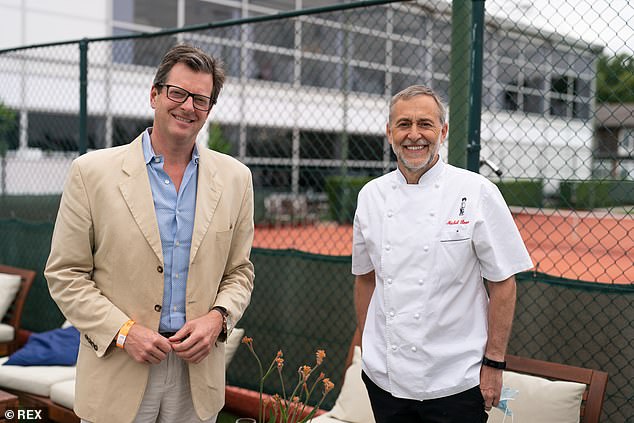 William Sitwell, left, pictured with Michelin Star chef Michel Roux Junior at the Wimbledon Tennis Championships this summer where they hosted a lunch

After the sadness of leaving Weston, it will be heart-warming to think that works of art and furniture, which are like so many close friends to myself and my family, will find new homes and become part of new, wonderful collections.’

Mr Robinson of Dreweatts Auctioneers reflected on the mammoth challenge of cataloguing the Sitwell family treasures.

‘Weston Hall was a fascinating encapsulation of not just the Sitwell family history, but also the social history of Britain over the last few centuries,’ he said.

‘With the extensive collection of works having been preserved in the house for so long, it has been thrilling to go on a journey of discovery with the family, to uncover so many hidden treasures with such wonderful provenance.

‘The stories behind the works truly enrich the pieces and when you purchase work from this sale, you know you are buying a true piece of history.’

The sale of the Tiepolo painting will be included in the run-up of a two-day sale, titled Weston Hall and the Sitwells: A Family Legacy, and it will take place at Dreweatts on November 16 and 17.