Omicron wave could put as much pressure on hospitals as last winter even if it IS mild: Health experts warn super-mutant variant is spreading faster than Delta in UK, there are already 1,000 cases and it will be dominant in a month

The incoming Omicron wave could be as bad or worse for the NHS than the second coronavirus peak last winter even if the super-mutant variant is weaker than its predecessors, scientists have warned.

Real-world data suggests the highly-evolved variant is three-and-a-half times more likely to infect people than Delta because of its combination of vaccine resistance, increased infectiousness and antibody escape.

So far there have been only 246 official Omicron cases in the UK so far, but Professor Paul Hunter, an epidemiologist at the University of East Anglia, said thousands could be flying under the radar.

In total, there are 46,000 Covid infections on average each day in the UK and data from the Covid Genomics UK Consortium (COG-UK) suggests the new strain is already behind around one in 60 of them.

Doctors in the South African epicentre of the new strain have insisted that most patients suffer only mild illness, with the US’ top Covid expert Dr Anthony Fauci claiming it ‘doesn’t look like there’s a great degree of severity to it’.

But British scientists, including the Government’s own, have warned against the narrative that its a weaker strain, claiming that it could put significant pressure on the NHS by virtue of the fact it can infect more people.

One mathematical modeller predicted there could be up to 3,000 hospital admissions per day in the UK in January if Omicron takes off domestically — compared to the 4,000 per day at the peak last year.

Covid hospital admissions in South Africa’s Guateng province — ground zero of the outbreak — have risen 230 per cent in the fortnight since its discovery, with 2,100 patients admitted last week, raising further doubts about the claim it is milder.

Scientists won’t know the full scale of Omicron’s infectiousness, vaccine evasiveness or lethality for another two weeks, when they can isolate the virus in a lab, study its biology and test it against vaccines.

But it has triggered a meteoric rise in infections in South Africa, where there were 11,125 yesterday, up fivefold in a week. Only around a quarter of South Africans are vaccinated so it’s unclear how this will translate in the UK, where more than 70 per cent are immunised.

Laws requiring masks in shops and on public transport are set to stay in place in Britain until the New Year, as ministers try to fend off demands for tougher restrictions in the run up to Christmas.

In total, there are 46,000 Covid cases on average each day in the UK and data from the Covid Genomics UK Consortium (COG-UK) suggests the new strain is already behind around one in 66 of them, or 1.4 per cent 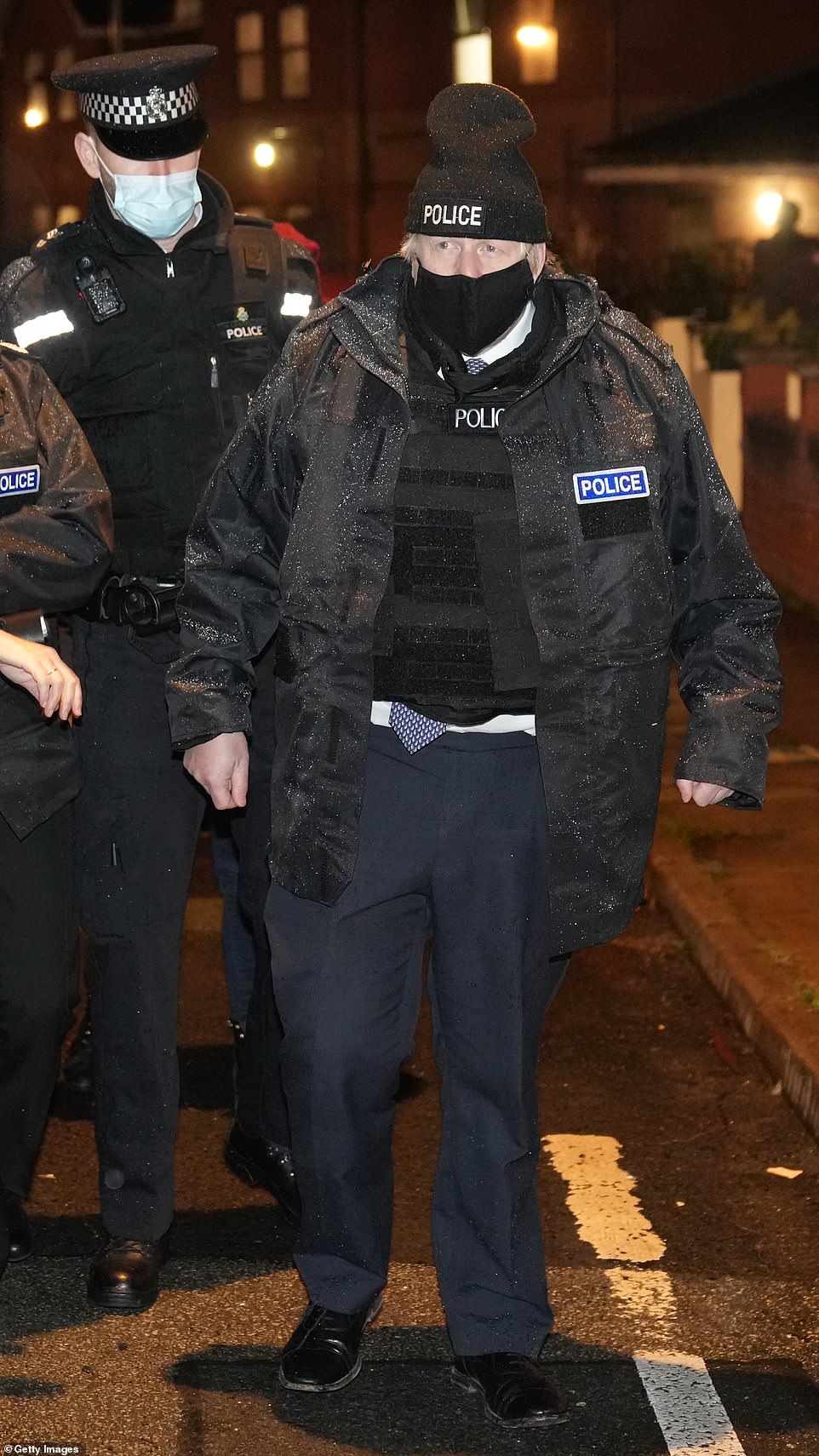 South African scientists have maintained that Omicron is causing only mild illness and have accused the UK of overreacting by shutting its borders to travellers from swathes of the continent. But Boris Johnson today denied the allegations. Visiting police in Merseyside, the Prime Minister told reporters: ‘No, I think what we’re doing is responding to the pandemic’

This is the image that has sparked fear among scientists, prompted ministers to turbocharge the UK’s booster vaccine rollout and seen the return of mask mandates in England. It details the new super-mutant Omicron variant’s 32 spike protein mutations which experts fear will make it the most infectious and vaccine-resistant strain yet. The graphic, released by the country’s top variant monitoring team, also lays bare how it is far more evolved than even the world-dominant Delta strain, with nearly five times as many alterations on the spike 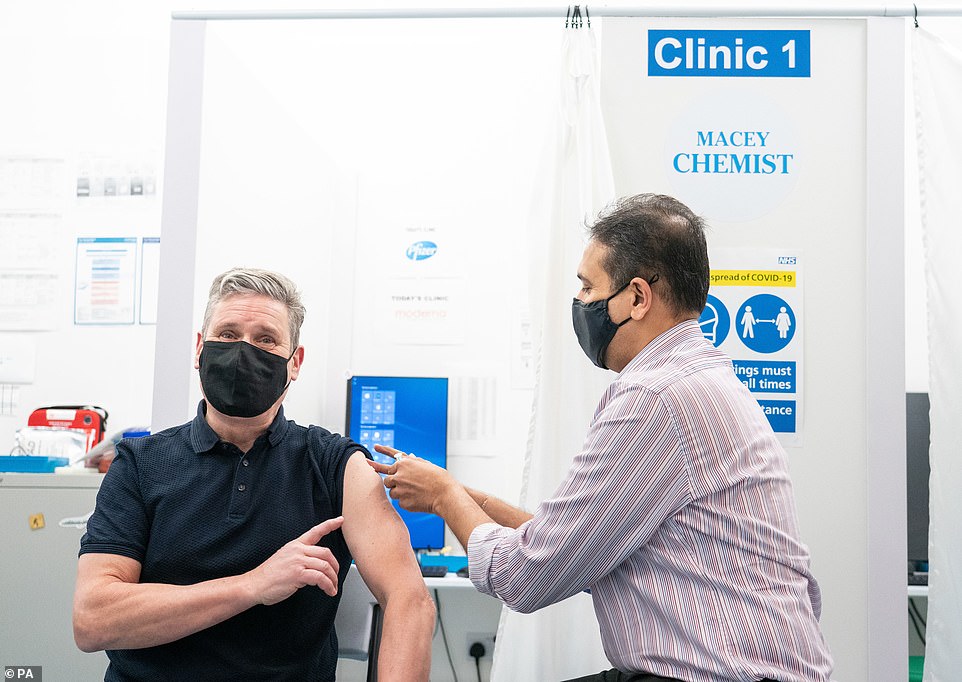 Professor Paul Hunter, from the school of medicine at the University of East Anglia, told BBC Breakfast: ‘How it’s likely to spread in the UK still uncertain, but I think the early signs are that it will probably spread quite quickly and probably start outcompeting Delta and become the dominant variant probably within the next weeks or a month or so at least.

‘The big remaining question is actually how harmful it is if you do get Covid with this Omicron variant, and that’s the question that we’re struggling to answer at the moment.’

He said travel restrictions would have a minor impact, adding that ‘one of the problems with travel restrictions like this is that it then de-motivates other countries to actually be open about their own situations for fear of what they would see as economic sanctions. So I think once the infection is spreading within a country, then border restrictions don’t really add anything.

‘We’ve known that long before Covid. This has been knowledge that we’ve had for decades, if not centuries, to be honest.’

South African scientists have maintained that Omicron is causing only mild illness and have accused the UK of overreacting by shutting its borders to travellers from swathes of the continent.

But Boris Johnson today denied the allegations. Visiting police in Merseyside, the Prime Minister told reporters: ‘No, I think what we’re doing is responding to the pandemic.

‘We’re now going further and toughening those measures up as we see the spread of Omicron around the world.

‘I don’t think we need to change the overall guidance and advice we’re giving about Omicron in this country. We’re still waiting to see exactly how dangerous it is, what sort of effect it has in terms of deaths and hospitalisations.’