One in two hospitalised Covid patients develop a complication

A QUARTER of people in their 20s suffer organ damage after being hospitalised with Covid, major NHS study finds – as SAGE adviser warns it’s ‘naive’ to think virus only affects elderly 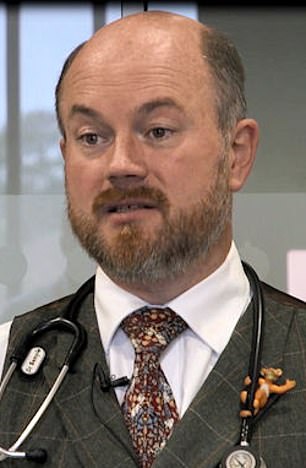 More than a quarter of Covid hospital patients in their twenties suffer organ damage, a study has suggested.

SAGE member Professor Callum Semple, one of the authors of the research, said the narrative that the virus only affects the elderly was ‘naive’.

The study analysed more than 70,000 people admitted with the virus across the UK last year.

They found half suffered the complication, with the kidney, lungs and heart the most commonly affected organs.

Over-60s were the most affected group but complication rates weren’t trivial in younger adults, according to researchers from the universities of Liverpool and Edinburgh.

In total, 27 per cent of 19-to-29-year-olds admitted to hospital with Covid suffered organ damage, with liver problems particularly prevalent among younger patients.

People in their 30s saw a higher proportion still, with 37 per cent of patients developing a complication.

The researchers were not able to measure the severity of the organ damage across different patients because they were not tracked after they left hospital.

Experts warned the third wave of the pandemic this summer could cause even more complications, because a greater proportion of patients admitted to hospital are young people this time around. 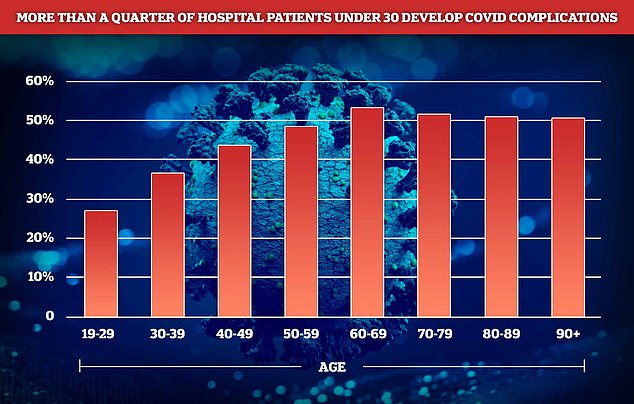 More than a quarter of people in their 20s hospitalised with Covid last year developed complications including kidney, lung and heart problems, a real-world data study has revealed

Professor Semple said: ‘The message around Covid being a disease for the frail and the elderly — what we realise now is that paradigm is naïve.

‘Young people will get damage from this disease and it will leave a legacy on the rest of their lives and how they want to live. SARS-Cov-2 (which causes Covid) is a nasty virus, it’s not just another flu.’

Most coronavirus patients will recover within a fortnight, suffering a fever, cough and losing their sense of smell or taste for several days.

However, evidence is beginning to show that the tell-tale symptoms of the virus can persist for weeks on end in ‘long haulers’ — the term for patients plagued by lasting complications.

Data from the COVID Symptom Study app, by King’s College London and health company Zoe, suggests one in ten people may still have symptoms after three weeks, and some may suffer for months.

For those with more severe disease, Italian researchers who tracked 143 people who had been hospitalised with the disease found almost 90 per cent still had symptoms including fatigue two months after first falling unwell.

The most common complaints were fatigue, a shortness of breath and joint pain – all of which were reported during their battle with the illness.

Another study in Italy showed one in ten people who lose their sense of taste and smell with the coronavirus – now recognised as a key sign of the infection – may not get it back within a month.

The study, published in the journal JAMA Otolaryngology – Head and Neck Surgery, involved 187 Italians who had the virus but who were not ill enough to be admitted to hospital.

The UK’s Chief Medical Officer Professor Chris Whitty has said the longer term impacts of Covid-19 on health ‘may be significant’.

Support groups such as Long Covid have popped up online for those who ‘have suspected Covid-19 and your experience doesn’t follow the textbook symptoms or recovery time’.

The study — the largest of its kind — looked at Covid patient data from more than 300 hospitals between last March and August.

Dr Thomas Drake, a data scientist from the University of Edinburgh, said the trend was different to the risk of death, which increases sharply as people age rather than plateauing after 50.

While complications were still common in younger people, the scientists noted they had a smaller sample size to work with because so few young people were admitted during the first wave of the epidemic.

Kidney damage — which can affect people for their entire lives — was the most common complication, with 24 per cent of all patients suffering damage.

Lung injuries (18 per cent) were the second most common, while heart issues affected 12 per cent patients.

Organs can become damaged when the immune system overreacts to Covid infection, causing itself to attack healthy tissue while trying to fight off the virus — a process known as systemic inflammation.

Covid also causes blood clots that can migrate to major organs in the body and cut off their blood supply, leading to damage.

Joint senior author Professor Ewen Harrison, a surgeon and data scientist at the University of Edinbugh, said: ‘Patients in hospital with Covid frequently had complications of the disease, even those in younger age groups and without pre-existing health conditions.

‘These complications could affect any organ, but particularly the kidney, heart and lungs.

‘Those with complications had poorer health on discharge from hospital, and some will have long-term consequences.

‘We now have a more detailed understanding of Covid and the risks posed, even to younger otherwise healthy people.’

He added: ‘Our review highlights some insightful patterns and trends that can inform healthcare systems and policy maker responses to the impacts of Covid.

‘Our results can also inform public health messaging on the risk Covid poses to younger otherwise healthy people at a population level, particularly in terms of the importance of vaccination for this group.’

Dr Drake said: ‘Complications were common in all age groups, not just in older people or those with pre-existing health conditions.

‘People who have complications will often need expert care and extra help to recover from their initial hospital admission.’

Researchers said the data does not provide a long-term picture and that the timings of complications and patients quality of life were not studied.

The conditions looked for in the study were decided on before it took place so not all organ damage caused by Covid would have been included.

Patients were not tested for multiple complications so the true number may have been higher.