Britain could be as tightly aligned to the EU as if it had never left with 20 years due to economic damage caused by the decision to quit, former chancellor George Osborne has claimed.

The ex-Tory politician, who helped lead the Remain campaign in 2016, said the referendum ’caused a lot of damage to Britain’s economy’.

In radio interview, David Cameron’s former right-hand man slammed Brexiteers who refused to acknowledge the negative as well as positive aspects of what has happened in the past six years. 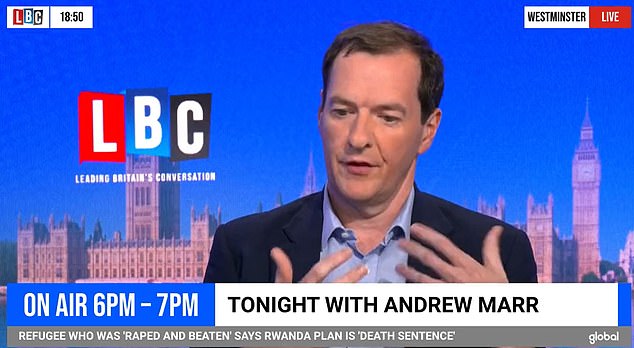 The ex-Tory politician said the referendum ’caused a lot of damage to Britain’s economy’. 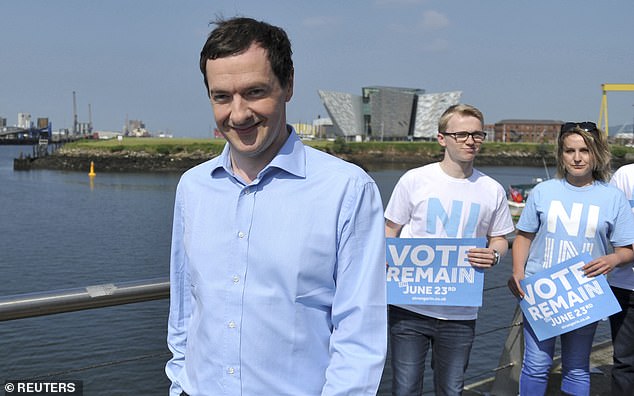 In radio interview, David Cameron’s former right-hand man, who helped lead the Remain campaign in 2016, slammed Brexiteers who refused to acknowledge the negative as well as positive aspects of what has happened in the past six years.

He added: ‘In many ways the people I respect most are the Brexiteers who say there’s an economic cost to Brexit, but there are other benefits, such as parliamentary control, sovereignty over our borders.

‘What was nonsense and remains nonsense are the people who say Brexit was a great economic move to benefit the British economy, or a great act of free trade. It was the biggest act of protectionism in British history, and that is only now really, now it’s fully implemented, becoming clear, and that’s why free trade with Europe has got to be a priority for whoever the government in the next few years.’

Brussels threatened a trade war with Britain today as it launched a legal battle over Boris Johnson’s plans to abandon parts of the Brexit agreement to ease political pressure in Ulster.

The European Commission announced fresh legal action this morning as part of a series of measures in response to the Government’s move to unilaterally scrap parts of the Northern Ireland Protocol.

The European Commission is also resuming legal proceedings against the UK that were shelved last year to facilitate negotiations on post-Brexit trade.

The Government has been given two months to respond before the case goes to the European Court of Justice.

The European Commission vice-president said: ‘It has created deep uncertainty and casts a shadow over our overall co-operation, all at a time when respect for international agreements has never been more important.

‘That is why the Commission has today decided to take legal action against the UK for not complying with significant parts of the protocol on Ireland/Northern Ireland.’

The plan would mean ‘breaking an agreement that protects peace and stability in Northern Ireland, an agreement reached together only three years ago’ by Boris Johnson’s Government and the EU.

The bill aims to sweep away key parts of the Protocol – including a check-free ‘green channel’ for goods from mainland Britain and stripping control from the EU court.