A paedophile who molested a little boy was spared jail as he is no longer ‘the same man’ after a brain injury he suffered in a car crash.

John Brady, formerly of Toxteth, Liverpool but now of Southport, sexually abused a vulnerable six-year-old child, when he was aged 18, in the 1990s.

The young victim suffered psychological damage and has battled depression as a result.

But his abuser was then involved in a car crash, which left him with a ‘life-altering’ brain injury, and now lives in adult foster care.

Judge David Swinnerton said: ‘The man that stands in front of me is not the man that committed this offence.’

He was found guilty of one count of indecency with a child, but acquitted of all the other allegations after a trial at Liverpool Crown Court. 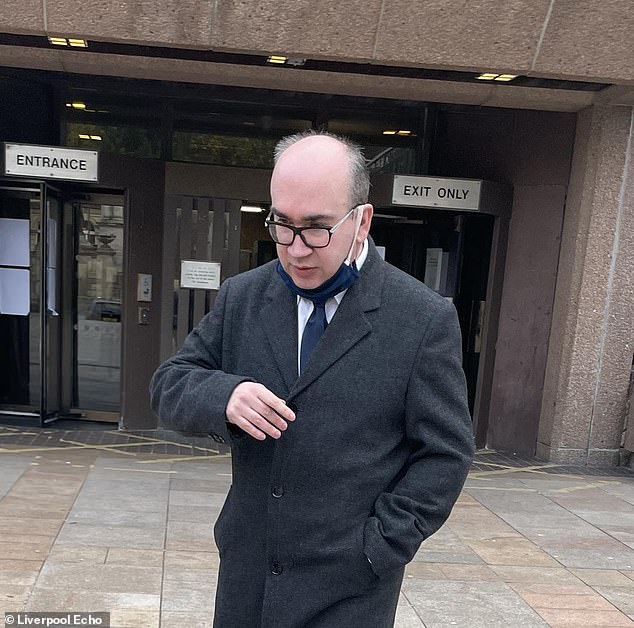 John Brady, now 45, sexually abused a vulnerable six-year-old child when he was 18 in the 1990s

Judge Swinnerton told Brady he was young at the time of the abuse, but his victim was ‘much younger and therefore vulnerable’.

Judge Swinnerton added: ‘He had no idea what he was doing, what this was, as a small child, and you told him he would know when he got older.

‘Well he did of course get older and what you did caused him a great deal of distress and psychological difficulties.’

Judge Swinnerton said: ‘It describes his struggles as he’s grown up, this having happened to him, and issues and problems he’s had with depression and the way he’s dealt with that and has struggled to trust people.’

The maximum sentence for indecency with a child at the time the offence was committed was two years in prison.

Under British law, you cannot receive a sentence greater than you could have received at the time of an offence. 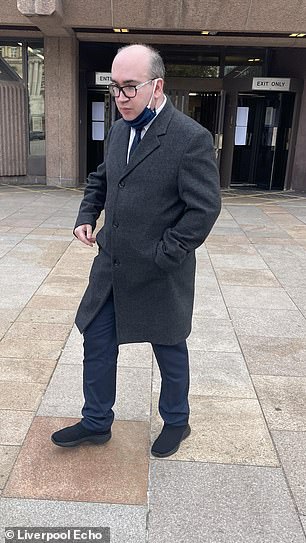 But Brady was then involved in a car crash, which left him with a ‘life-altering’ brain injury, and now lives in adult foster care

Mr Gibson said not long after the abuse, the maximum sentence was increased to 10 years in prison.

The equivalent offence today – inciting a child to engage in sexual activity – carries a maximum sentence of 14 years.

Sarah Holt, defending, said her client was ‘just 18’ at the time and his background was set out in pre-sentence, intermediary and medical reports.

Ms Holt said: ‘Whether he was as mature as some are at 18 is something perhaps we will never know fully, but there were clearly difficulties in childhood – there have obviously been many more difficulties subsequently.’

Urging the judge to spare him jail, she said her client didn’t have any previous convictions.

Judge Swinnerton said if he was sentencing Brady for inciting a child to engage in sexual activity, then guidelines indicated a starting point of three to four years in prison.

However, he said the maximum he could give Brady for indecency with a child was two years and applying the guidelines in a ‘measured way’, he had to come down from ‘the very top end of the range’.

He said Brady was 18 at the time, experienced difficulties as a child, and hadn’t committed any offences before or since this incident.

Settling on 18 months in jail, Judge Swinnerton said he had to decide whether or not to suspend this sentence.

He said: ‘The man that stands in front of me is not the man that committed this offence, in the sense that you had had a road traffic accident in March of 2004, which caused you a traumatic brain injury.

‘Since then you have been cared for by your mother, while she was still alive until 2014, and you’re in what was described to me basically as a sort of adult foster care.

‘So you live with adults who help to look after you now, because you can’t live on your own as a result of both physical and mental effects of a traumatic brain injury.’

Judge Swinnerton added: ‘At the time you committed that offence, you had not suffered that injury.

He added: ‘You no longer present any risk of danger because you struggle to care for yourself, let alone abuse anybody else.

‘It’s perhaps an act of mercy for you, but I am going to suspend the sentence.

‘Were it not for both the maximum at the time and the level of injury, which I know you’ve sustained, which I know is permanently life-altering, you would have gone to prison.’

Some of the victim’s supporters shook their heads as Judge Swinnerton gave Brady 18 months in prison, suspended for two years, with a 30-day Rehabilitation Activity Requirement and four-month home curfew, from 8pm to 8am daily.

Brady must sign on the Sex Offenders Register for 10 years.

After Brady left court, the judge told the victim: ‘In many, many ways he deserved to go straight to prison for what he did to you as a child.

‘But I hope I explained sufficiently, the maximum sentence when he did that was much, much lower, and the real issue is I’m not sentencing the same man who did it, because of the catastrophic effects of the brain injury he suffered subsequently.

‘Can I thank you for your courage in coming forward and reporting this and wish you all the best in the future.’