Horrified parents have slammed the new live-action Pinocchio movie as ‘completely unacceptable’ after the direction included a scene where the puppet is placed in a noose and hung from a tree.

Matteo Garrone’s adaptation of the 1883 novel has been heralded by critics as both a ‘horror movie’ and ‘frighteningly true to the book’.

But after the PG-rated motion-picture was released on August 14 parents have queued up to blast the production as ‘violent’ and warned it made their children burst into floods of tears.

‘Please do not take your kids to see this film,’ one shocked parent wrote. ‘I am heartbroken. Scenes of him being hung dead on a tree. Graphic. Violent. I’m so gutted the girls have witnessed that.’

The scene causing particular concern, of Pinocchio being hung from the tree, is in the original book, when the children’s character is strung up by two thieves who are trying to rob him. 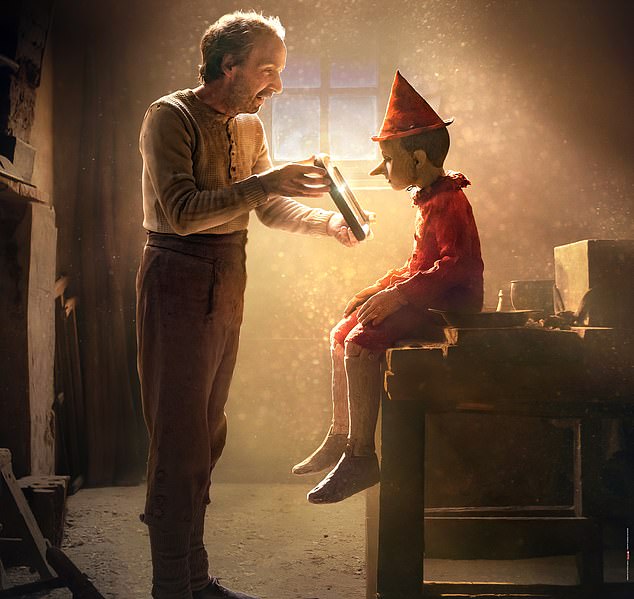 Matteo Garrone’s adaptation of Pinocchio stays close to the book, which was published in 1883. Above is Pinocchio inside Gepetto’s hut in Tuscany, Italy 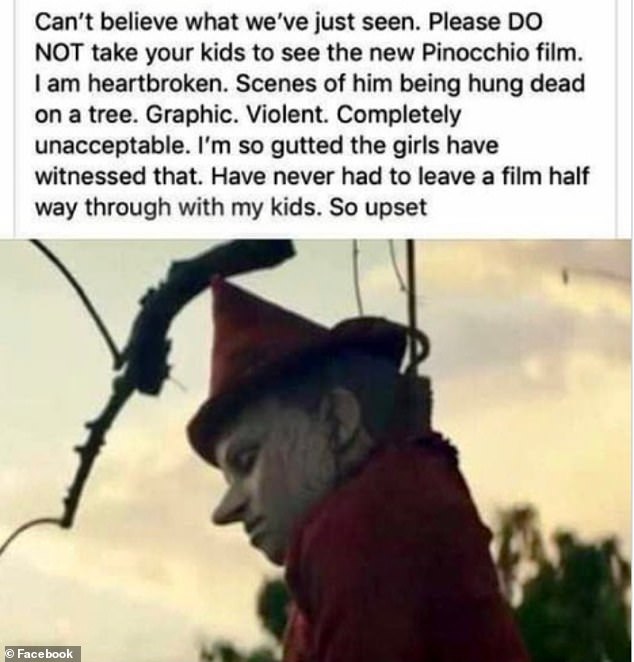 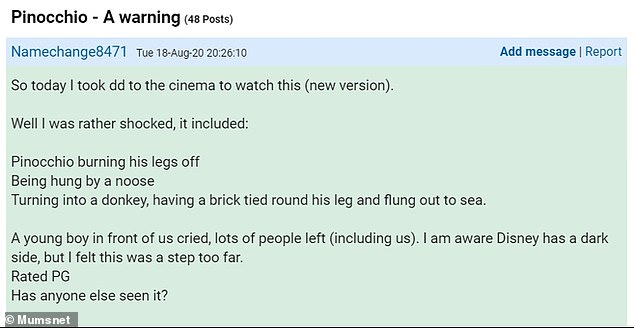 Venting their frustration at the movie, one parent said on Mumsnet: ‘So today I took the daughter to the cinema to watch this. Well I was rather shocked.

‘It included: Pinocchio burning his legs off, being hung by a noose, turning into a donkey, having a brick tied around his leg and flung out to sea.

‘A young boy in front of us cried, lots of people left (including us).’

Another said: ‘Me and mum went today and had to walk out half way through (along with most of the people in the cinema).

‘For someone who works with children I deemed it highly inappropriate (had a scene of hanging!) for any child to watch.

‘Not only that but it was a very surreal and weird film. I wouldn’t normally post but I would hate to think of children as disturbed by the film as the ones today.’

A third wrote: ‘Just a warning ladies… I took my son to see the new Pinocchio film today… he’s 24 and has learning disabilities… OMG what an utterly messed up film. 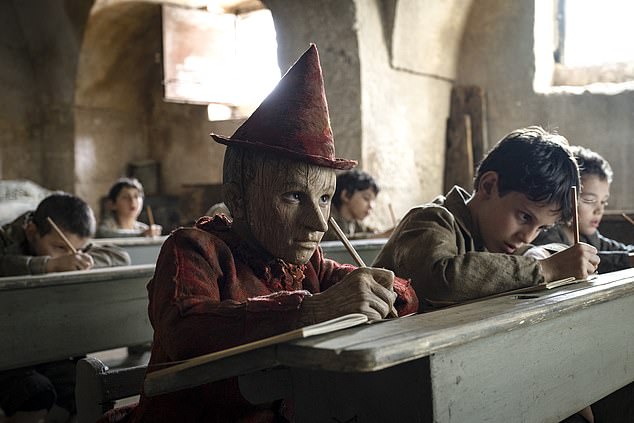 In the movie Pinocchio is hung from the tree, has his feet burned off and turns into a donkey 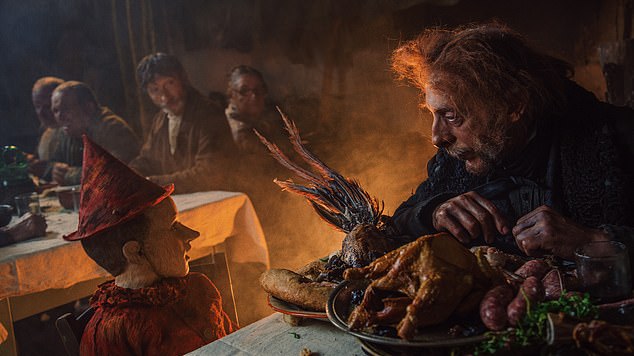 The film has been described as something of a ‘nightmare’ by critics. Parents have complained they’ve been left with crying children after seeing the PG-rated production

The 1883 Pinocchio by Carlo Collodi is set in Tuscany, Italy, and includes several heart-rendering moments including a scene where Pinocchio hits Jiminy Cricket over the head and kills him.

The reader is left believing the talking cricket has died until the final chapter, where he is seen hiding in Gepetto’s hut.

The 1940 Disney adaptation of the book dropped this, and several other, harrowing scenes to ‘sanitise’ the production for families. Garrone chose to ignore this and instead remain close to the original Italian novel.

Hung in a tree, burned off feet, and the death of Jiminy Cricket: As the scenes were told in the 1883 novel

Carlo Collodi wrote the following in the novel The Adventures of Pinocchio.

On him being hung in a tree:

‘And they ran after me and I ran and ran, till at last they caught me and tied my neck with a rope and hanged me to a tree, saying, “tomorrow we’ll come back for you and you’ll be dead and your mouth will be open, and then we’ll take the gold pieces that you have hidden under your tongue”.’

On his feet being burnt off:

‘As he no longer had any strength left with which to stand, he sat down on a little stool and put his two feet on the stove to dry them.

‘There he fell asleep, and while he slept, his wooden feet began to burn.

‘Slowly, very slowly, they blackened and turned to ashes.’

And when he kills Jiminy Cricket:

‘At these last words, Pinocchio jumped up in a fury, took a hammer from the bench, and threw it with all his strength at the Talking Cricket.

‘Perhaps he did not think he would strike it. But, sad to relate, my dear children, he did hit the Cricket, straight on its head.

‘With a last weak “cri-cri-cri” the poor Cricket fell from the wall, dead!’

‘There is something rich and strange and generous in Matteo Garrone’s new live-action version of the Pinocchio story,’ writes The Guardian’s film critic Peter Bradshaw after giving the production four stars.

‘They have given us a story that combines sentimentality and grotesqueness in a really startling way. It looks like a horror film.’

He added: ‘The story is very different from the legendary 1940 Disney musical version – without which, admittedly, no one would care about any new remake or reinvention’. 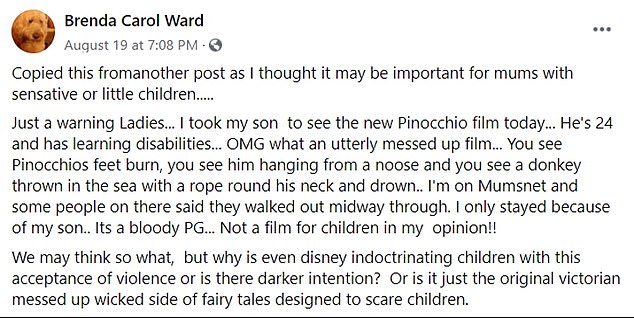 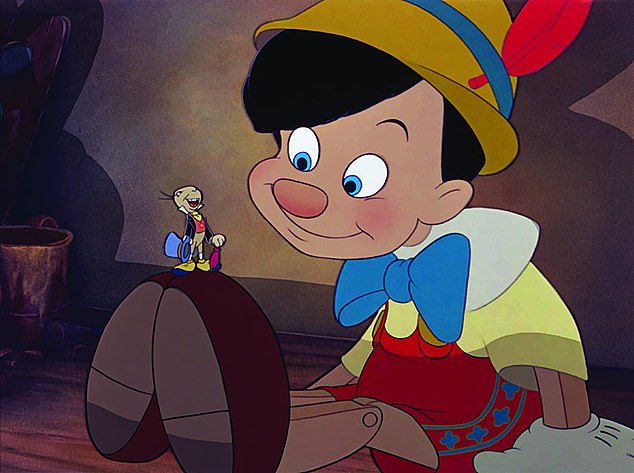 After hearing about the 2020 Pinocchio adaptation, some users were quick to point out that Fairytales were designed to teach children lessons.

‘It’s not much different from say Red Riding Hood’s grandmother being eaten by a wolf,’ one wrote on Mumsnet.

‘Fairytales were an instrument of repression, designed to scare children into obedience in times when the hierarchy was the principle of human organisation,’ said another.

‘Pinocchio was about the really terrible things that happen to a person who dares to lie to their elders and betters. No one in the past cared if kids were terrified.’

A further re-make of the film that is rumoured to be even darker will be released next year. It is by director Guillermo del Toro.

END_OF_DOCUMENT_TOKEN_TO_BE_REPLACED

END_OF_DOCUMENT_TOKEN_TO_BE_REPLACED
Recent Posts
We and our partners use cookies on this site to improve our service, perform analytics, personalize advertising, measure advertising performance, and remember website preferences.Ok