Washington: Mike Pence and Kamala Harris clashed over abortion rights, China and the Trump administration's handling of the coronavirus in a vice-presidential debate that was significantly more policy focussed and civil than the first presidential debate last week.

Both Pence and Harris repeatedly dodged the moderator's questions by pivoting to pre-prepared remarks and Pence often went over his allocated speaking time. 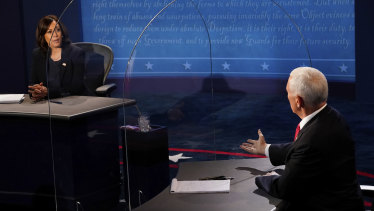 Harris, Joe Biden's Democratic running mate, went on the attack over the Trump administration's response to the coronavirus, a disease that has killed over 210,000 Americans and forced the President to spend three days in hospital.

"The American people have witnessed what is the greatest failure of any presidential administration in the history of our country," Harris said.

She accused the Trump administration of covering up the seriousness of the virus early in the year.

"They knew what was happening and they didn't tell you," Harris said. "Can you imagine if you knew on January 28th as opposed to March 13th what they knew, what you might have done to prepare?"

Harris, 55, is making history as the first black woman to ever feature on a presidential ticket.

Pence, Donald Trump's Vice-President, often took charge of the debate and demanded Harris answer whether a Biden administration would expand the number of judges on the Supreme Court (a practice known as "court packing").

Pence, an evangelical Christian, foregrounded the Trump administration's efforts to limit access to abortion, including by appointing conservative judges to the courts.

"I couldn't be more proud to serve as Vice-President to a president who stands without apology for the sanctity of human life," he said. "I'm pro-life. I don't apologise for it."

Harris said: "I will always fight for a woman’s right to make a decision about her own body. It should be her decision and not that of Donald Trump and the vice president, Michael Pence."

Harris said she was offended by Pence's suggestion that Democrats opposed the nomination of Trump nominee Amy Coney Barrett to the Supreme Court because she is a devout Catholic.

"Joe Biden and I are both people of faith and it's insulting to suggest that we would knock anyone for their faith."

Debate moderator Susan Page, of USA Today, grew frustrated midway through the debate with Pence's lengthy answers, saying: "Your campaign agreed to rules for tonight's debate with the Commission on Presidential Debates. I'm here to enforce them."

Harris accused the Trump administration of losing his trade war to China, to which Pence replied: "Lost the trade war with China? Joe Biden never fought it. Joe Biden’s been a cheerleader for Communist China over the last several decades."

The debate in Salt Lake City, Utah, was the first and only vice presidential debate of the campaign. Trump and Biden are scheduled to debate for a second time on October 15.

Our weekly newsletter will deliver expert analysis of the race to the White House from our US correspondent Matthew Knott. Sign up for the Herald‘s newsletter here, The Age‘s here, Brisbane Times‘ here and WAtoday‘s here.

END_OF_DOCUMENT_TOKEN_TO_BE_REPLACED

END_OF_DOCUMENT_TOKEN_TO_BE_REPLACED
Recent Posts
We and our partners use cookies on this site to improve our service, perform analytics, personalize advertising, measure advertising performance, and remember website preferences.Ok