Super-fit pensioner, 78, sues NHS ambulance bosses for £150,000 for misdiagnosis after she thought she had tweaked tendon in an exercise class only to lose her arm to a flesh-eating bug

Patricia Austin, 78, suffered pain from necrotising fasciitis several hours after attending a resistance band workout at a church hall in Aylesbury, on August 8, 2012, near her home.

However, when the pensioner called for an ambulance the next day, provided by South Central Ambulance Service NHS Foundation Trust, in ‘excruciating pain’ she was told it was gastroenteritis, a stomach bug, and paramedics refused to take her to hospital.

Mrs Austin is now suing the trust, claiming that her limb could have been saved had she been taken to hospital.

Necrotising fasciitis, caused by streptococcal flesh-eating bacteria, is notoriously difficult to diagnose in its early stages.

Patricia Austin, 78, is suing NHS ambulance bosses for £150,000 after her right arm had to be amputated when paramedics misdiagnosed her infection with flesh-eating bacteria as a stomach bug. She was eventually transferred from her home in Aylesbury to Stoke Mandeville hospital where doctors took eight hours to diagnose necrotising fasciitis

Her barrister, Richard Baker, told Central London County court that following the exercise session, the pensioner went shopping with her daughter without problem.

However, later that evening she began to suffer pain in her arm.

Mrs Austin went to visit her GP, who diagnosed a torn tendon, but on the night of August 9 she collapsed at home in agony.

Her daughter, Julie Newman, called 999, and spoke to the operator as ‘excruciating pain’ left her mother unable to talk on the phone.

A paramedic arrived and refused to take the pensioner, who was in agony, to hospital believing that she was suffering from gastroenteritis.

However, at 6.30am the next morning, August 10, she was taken to Stoke Mandeville hospital.

It took staff there eight hours to identify the flesh-eating bacteria before deciding to amputate her right arm, with the operation carried out at 5pm that day. 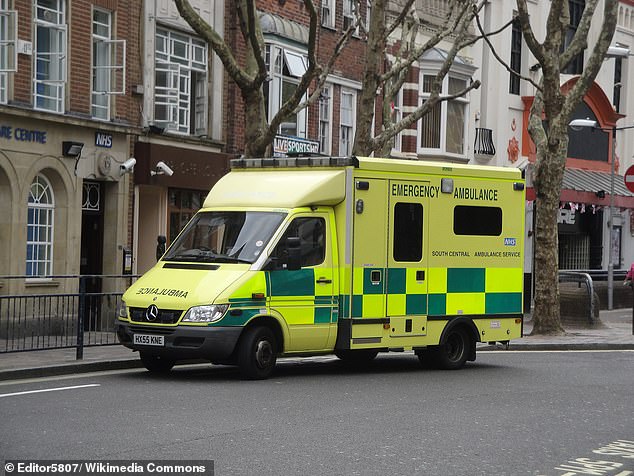 Defending the ambulance service, their barrister said the diagnosis of a stomach bug was ‘reasonable’. It was also acknowledged that the flesh-eating bacteria are difficult to diagnose

‘Necrotising fasciitis is an unusual condition and difficult to diagnose,’ said her barrister.

‘But our position is that with an admission around 10pm the night before, a diagnosis would on the balance of probability have been reached within six hours of her arriving at hospital.’

Speaking in defence, Bradley Martin QC, told the court the parademic ‘reasonably’ believed Mrs Austin was suffering from gastroenteritis, based on her symptons.

‘With hindsight, it is clear that Mrs Austin might have had pain in the arm, but it is clear that her pain was difficult for all the healthcare professionals she encountered to interpret,’ he said.

‘Mrs Austin presented to the paramedic as being unwell, with diarrhoea and vomiting, against a background of having seen the GP having torn a tendon in her right arm.

‘She did not complain to the paramedic of excruciating arm pain, observations were non-concerning.’

Based on this, the defence lawyer said it was ‘not mandatory to convey her to hospital’.

The time taken to identify the bacteria ‘illustrates how challenging it was in fact to secure the diagnosis and get her to theatre’, the QC said.

Necrotising fasciitis, more commonly known as the ‘flesh-eating disease’, is a rare but extremely vicious bacterial infection. ‘Necrotising’ refers to something that causes body tissue to die, which sums up the infection, capable of destroying skin, muscles and fat.

The disease develops when the bacteria enters the body, often through a minor cut or scrape. As the bacteria multiply, they release toxins that kill tissue and cut off blood flow to the area.

Because it is so virulent, the bacteria spreads rapidly throughout the body.

Sufferers must be treated immediately to prevent death, and are usually given powerful antibiotics and surgery to remove dead tissue. Amputation can become necessary if the disease spreads through an arm or leg.

Patients may undergo skin grafts after the infection has cleared up, to help the healing process or for aesthetic reasons.