Home » World News » Pensioner, spends over £4k to fix potholes despite not driving

Pensioner, spends over £4k to fix potholes despite not driving

Pensioner, 89, spends more than £4,000 to fix ‘dreadful’ potholes in her road – despite not owning or driving a car

A pensioner splashed out more than £4k to fix her pothole-strewn road – despite not driving or owning a car.

Elizabeth Williams, 89, has been hailed as a local hero after paying thousands to fix her road after she grew fed up of alleged inaction by Kingston Property Services, the company responsible for maintaining the road.

Some of the Newcastle-upon-Tyne residents said cars would drive onto the pavement on Wyncote Court to avoid metre-wide craters, which would cause damage to paving slabs – and affect house prices.

The dangerous driving also led to fears that someone would get hit – prompting Elizabeth, a resident for 22 years, to take action.

Elizabeth said: ‘I feel great about it now but it was awful – I was so b****y fed up. The potholes were absolutely dreadful. 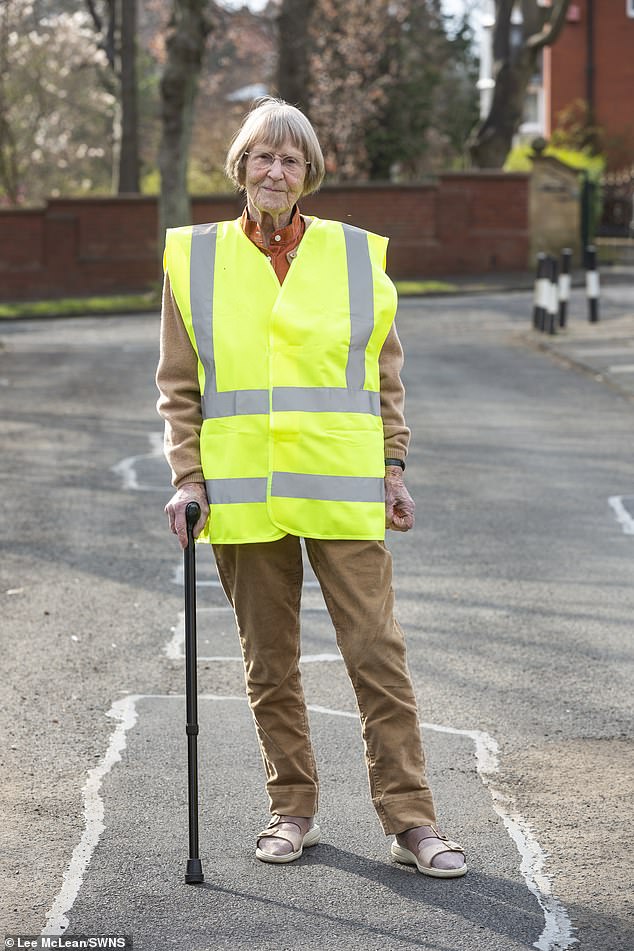 Elizabeth Williams, 89, got tired of waiting for Kingston Property Services to fix her pothole-strewn road in Newcastle, so she spent £4,000 of her own money to get them filled in 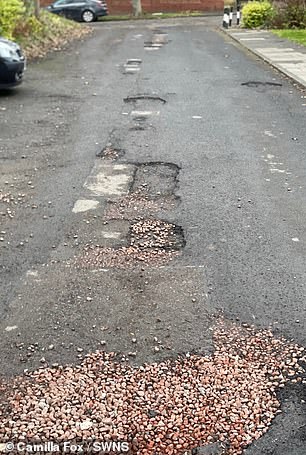 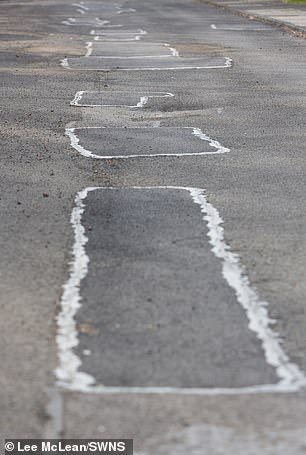 The potholes on Wyncote Court, Newcastle (pictured), had been getting worse for years and years, Elizabeth feared they could lead to an accident so she made sure they got filled in (right) 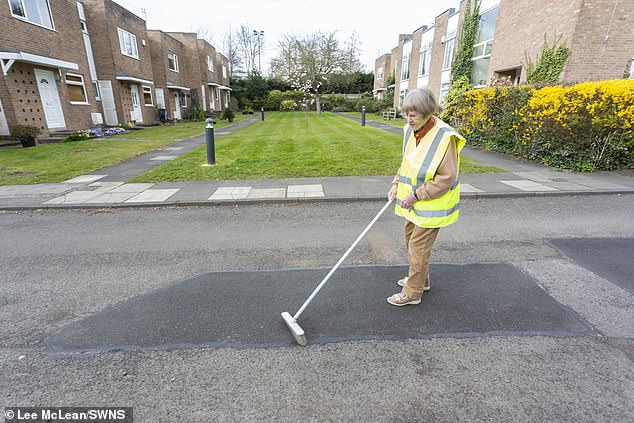 ‘I’m mad with Kingston. It’s their duty to do it. It’s a disgrace – I’ve been furious with them for at least four years.’

Elizabeth says she and other locals had been emailing, phoning and writing letters to the company over the 120-yard stretch.

And she says it was the last straw when a manager from the company told her in January they couldn’t get a contractor to do the work.

She claims it was then that she took it upon herself to find the work – and secured three quotes in a week.

Elizabeth claims she offered for Kingston to take on the contract after getting the quote on January 19.

But she says a manager told her the company would have to register with them and then wouldn’t be guaranteed to be given the job.

Residents on the road, which features 38 houses, believe the management company were receiving at least one email or letter a week pleading for repairs. 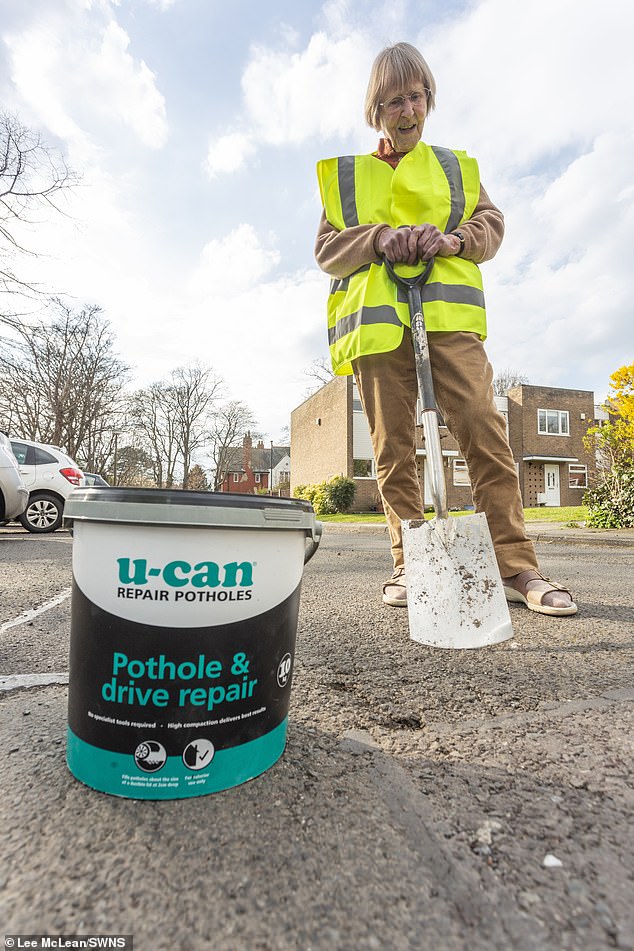 Locals say drivers were mounting the pavement on Wyncote Court to avoid metre-wide craters, which would cause damage to paving slabs – and affect house prices

Elizabeth said: ‘We were being pushed around by them and they weren’t keeping the road good for us, which is what their lease requires them to do.

‘For years they’ve done less and less and less. People wouldn’t come down the road – it was embarrassing and made the estate look like a dead-end sort of place.

‘It was increasingly irritating watching cars go round the potholes and thinking that an ambulance or delivery van would get damaged.

‘Then they would have got a payout from Kingston – and ultimately that would have fallen on us.’

Elizabeth says she hasn’t asked for any contributions from the community, but other residents have since pledged to help.

Camilla Fox, 55, a film location manager, said: ‘Elizabeth has been out there in the rain sorting this out – when she should be enjoying her retirement.’

|And Jonathan Netts, 56, a property worker, said: ‘It was horrible – there was as much pothole as road. I could hear cars bumping over them all the time.

‘We just couldn’t see a way forward, but Elizabeth is a hero – she just did it. She’s amazing! nobody wanted it to happen this way but we’re so grateful to her.’ 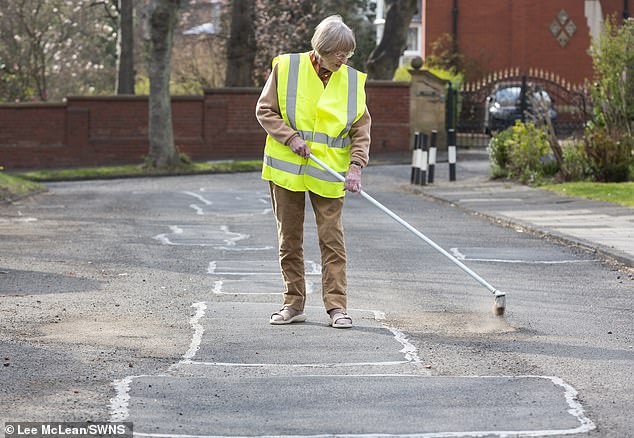 Carly Waller, director of Kingston Block Management, said: ‘Kingston is the managing agent and responsible for approving contractors to carry out maintenance to roads at these premises.

‘A large project to fully resurface all roads was in the planning stages which includes letting leaseholders know of our plans.

‘There were delays in obtaining quotes for this work due to unavailability of contractors and materials which meant we couldn’t start the work as quickly as we wanted to.

‘Leaseholders can nominate their own contractors to carry out the work and we asked for those details so we could cover the cost of work, but did not receive those details.

‘We are still planning to carry out a full resurface of the road as soon as possible as some pot holes still remain.

‘We’ve reimbursed the leaseholder fully for the work she paid for.’