The revelations come less than 24 hours after a WA couple revealed they were given the wrong baby for their daughter’s funeral in 2017.

Rita and Chris Santorini are suing WA’s health service and a funeral provider over claims their stillborn child, Lily, was mistakenly cremated by another grieving family just hours before they attended a chapel service and realised the tiny baby inside the coffin was not theirs. 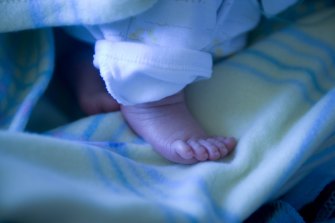 Since the WA District Court civil case became public on Wednesday, several other women have contacted Maurice Blackburn Lawyers, who are representing the Santorinis, claiming their stillborn children were also cremated at the pathology unit without their knowledge — robbing them of their final goodbyes.

Brie, whose surname WAtoday has chosen not to publish, told ABC Radio her daughter, Jessie, was cremated before a planned service which she and her partner wanted to attend.

Jessie was born at Fiona Stanley Hospital in March 2016 at 19 weeks, just days shy of the 20-week milestone to be a registered birth. Her body was then transferred to the KEMH pathology unit for a post-mortem examination.

Brie said she had requested her baby not have a cremation service until a burial gown was sent over.

“[Days later] I received a phone call … and she said, ‘This is such-and-such from pathology, I’ve got ashes for you to collect’, and I said, ‘I beg your pardon, what?’” she said.

“You were supposed to wait for the gown, you were also supposed to call us as to when the testing was finished so we could attend the cremation service that you hold in the chapel.”

Brie said she spoke with management at the pathology clinic shortly after learning her daughter had been cremated.

“I said to him I wanted an apology, I said I was going to get legal advice … he pretty much said almost nothing, they did not give us an apology either via the phone call or via a letter,” she said.

“He was very, very reserved in how much he said because, I mean, it was a major stuff up, but we were under the impression that this was not a common occurrence, it was obviously some human error, and we were so traumatised by the entire event we didn’t get legal advice.

“I just assumed they would refine their practices and the people involved would be reprimanded and ten months later almost the identical thing happened to the Santorini couple and I’ve since yesterday found out that it also happened to two other people.”

One of those other women told WAtoday she was considering launching a class action after not being notified when her child was being cremated so she could attend the service.

The woman, who did not want to speak publicly, said she had since learnt her experience was not an isolated incident.

“[The mothers] claim to have also been denied the opportunity to say goodbye to their stillborn or miscarried babies before they were cremated, or telling us that their requests in relation to the cremation of their baby weren’t honoured, which has been very distressing for them,” she said.

Pathwest, which runs KEMH pathology unit, has been contacted for comment.

Deshaun Watson is showing regret for his actions as his NFL future remains in limbo … saying he’s “truly sorry to all the women” he impacted. Watson is facing a massive suspension after being accused of sexual misconduct with more than 20 women … and before the Cleveland Browns’ preseason

END_OF_DOCUMENT_TOKEN_TO_BE_REPLACED

Darius Campbell Danesh reportedly checked into an apartment under Gerard Butler’s girlfriend Morgan Brown’s name in the days before his death. The Pop Idol star died at the age of 41 this week. His family said he was found dead in his US apartment, and his cause of death remains

END_OF_DOCUMENT_TOKEN_TO_BE_REPLACED

Last week, Olivia Wilde and Jason Sudeikis’s lawyers were in court in New York, trying to work out which jurisdiction should deal with the ongoing custodial issue of their two kids. Otis and Daisy Sudeikis were born in New York, and the family lived in New York for years. Then

END_OF_DOCUMENT_TOKEN_TO_BE_REPLACED

Kim Kardashian has reportedly said that she is worried that her ex husband Kanye West will continue to ravage future relationships after split from Pete Davidson. The SKIMS founder recently concluded her romance with stand-up comic and actor Pete, 28, and it is believed Kanye's medalling could have been a

Actress Amandla Stenberg accuses lesbian New York Times critic of objectifying her in film review of slasher movie ‘Bodies Bodies Bodies’: ‘Maybe if you had gotten your eyes off my t**s you could’ve watched the movie!’ A New York Times film critic shared a screenshot of the message on Twitter

END_OF_DOCUMENT_TOKEN_TO_BE_REPLACED

Apple warns of security flaw for iPhones, iPads and Macs

END_OF_DOCUMENT_TOKEN_TO_BE_REPLACED

An early morning shooting outside an Aurora sports bar is being investigated as a homicide. At 1:52 a.m. Sunday police responded to the parking lot of Challengers Sports Bar, 12161 E. Iliff Ave., on a shooting, according to a news release. Officers determined that a fight preceded a shooting and that