Rishi Sunak today called on Britain’s allies to boost their supply of arms to Ukraine, including the delivery of more air defence systems to the war-torn nation.

The Prime Minister, attending a meeting of the British-led Joint Expeditionary Force in Riga, Latvia, also pushed for a focus on ‘degrading Russia’s capability to regroup and to resupply’.

He demanded that other nations be ‘very strong about calling out’ Iran’s supply of weaponry for Vladimir Putin’s war machine and to keep up crippling sanctions on Moscow.

And Mr Sunak dismissed any possible call for a ceasefire by Russia as ‘completely meaningless’ until Mr Putin withdrew his troops from occupied parts of Ukraine.

The PM arrived in the Latvian capital this morning for the JEF meeting – which brings together the leaders of Denmark, Finland, Estonia, Iceland, Latvia, Lithuania, the Netherlands, Sweden, Norway and the UK – on the first leg of a whistlestop trip to the Baltic region.

He will later meet with British troops in neighbouring Estonia and to sign a new technology partnership to bolster digital ties.

Mr Sunak is calling on JEF leaders to sustain or exceed their current levels of support for Ukraine into 2023.

Britain has pledged to supply hundreds of thousands of rounds of artillery ammunition to Ukraine next year, under a £250million contract.

The PM urged JEF leaders to ensure they ‘deliver more military aid and that military aid evolves’ in the face of Russia’s launching of airstrikes on major Ukrainian cities. 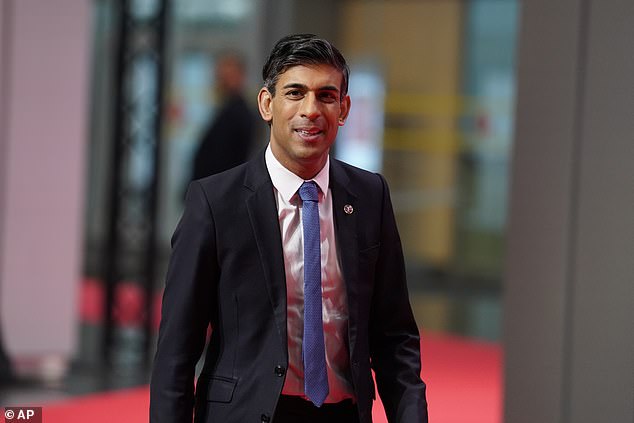 Rishi Sunak called on Britain’s allies to boost their supply of arms to Ukraine, including the delivery of more air defence systems to the war-torn nation 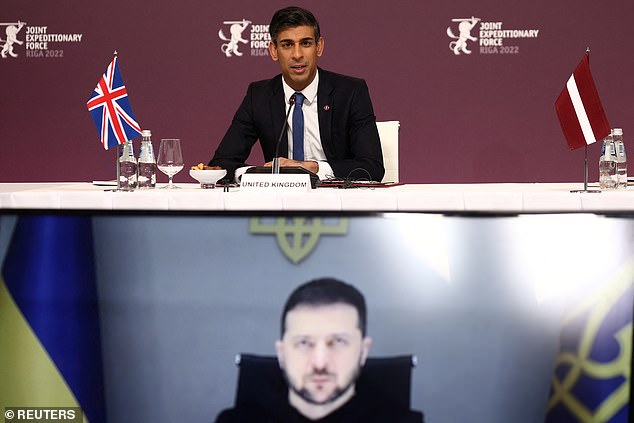 The Prime Minister attended a meeting of the British-led Joint Expeditionary Force in Riga, Latvia, where leaders heard from Ukrainian President Volodomyr Zelensky 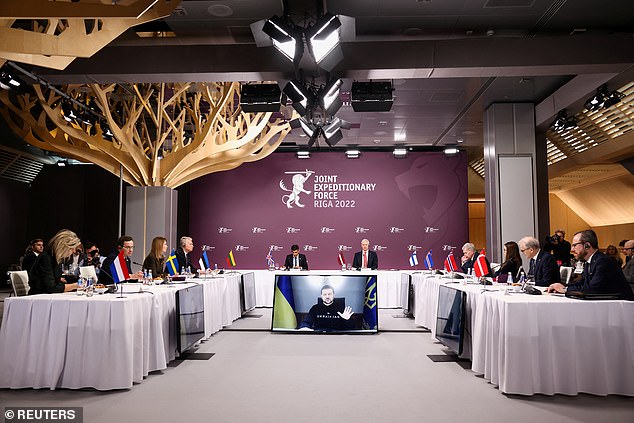 The JEF brings together the leaders of Denmark, Finland, Estonia, Iceland, Latvia, Lithuania, the Netherlands, Sweden, Norway and the UK 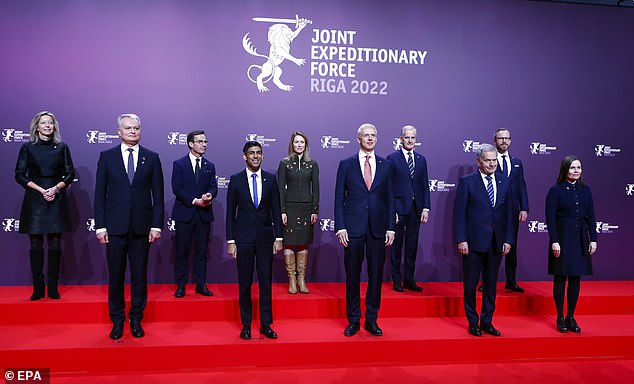 ‘For our part in the UK, we have pledged to match or exceed the £2.3billion in aid that we provided this year next year.

‘I would very much hope and encourage others around the table to do whatever they can to continue the strong support.’

The PM also called for the UK’s allies to ‘continue to focus on degrading Russia’s capability to regroup and to resupply and that means going after its supply chains and removing the international support’.

He added: ‘Particularly I’m thinking of Iran and the weapons that it is currently providing to Russia, which we should be very strong about calling out as we have done in the United Nations.

‘But also the economic consequences for Russia must continue to be severe and in that vein, the new oil price cap that the G7 have instituted and others have followed, I think, can be very helpful.’

Britain has recently imposed sanctions on Iranian businessmen involved in the production or supply of military drones used to carry out attacks in Ukraine.

Speaking prior to an address to the JEF meeting by Ukrainian President Volodomyr Zelensky, Mr Sunak rejected the notion that the West could entertain a demand by Russia for a ceasfire without the Kremlin withdrawing its troops.

‘We must be clear that any unilateral call for a ceasefire by Russia is completely meaningless in the current context,’ he said.

‘I think it would be a false call. It would be used by Russia to regroup, to reinforce their troops and until they have withdrawn from conquered territory, there can and should be no real negotiation.’

In his own message to JEF leaders, Mr Zelensky reiterated his call for Western allies to provide an air shield for Ukraine from Russian strikes.

‘I call upon you to do everything to accelerate the defeat of the occupiers,’ the Ukrainian president said through an interpreter.

‘100% air shield for Ukraine, that would be one of the most successful steps against Russian aggression and this step is required right now.’

After the JEF meeting, Mr Sunak was due to meet Latvian PM Krisjanis Karins for one-on-one talks.

In Estonia, which shares a 182-mile border with Russia, he will meet UK and Nato troops serving on alliance’s eastern flank.

The PM’s official spokesman said: ‘Any suggestion the PM is watering down our staunch support for Ukraine is categorically untrue.’