Police have arrested two people after an Israel flag featuring the Nazi swastika was put up at Royal Holloway, University of London.

There are ‘a number of reports of hate crime’ at the university being investigated, said Surrey Police. In one instance, a poster with a swastika in place of the Star of David on the flag of Israel was displayed outside the premise’s library.

A 21-year-old man from Egham and a 19-year-old woman from Englefield Green have been arrested, a Surrey Police spokesperson confirmed. Both have been released on bail while an investigation continues.

Posting to a Facebook group for Royal Holloway students, a woman who came across one of the posters branded the images ‘disgusting’. 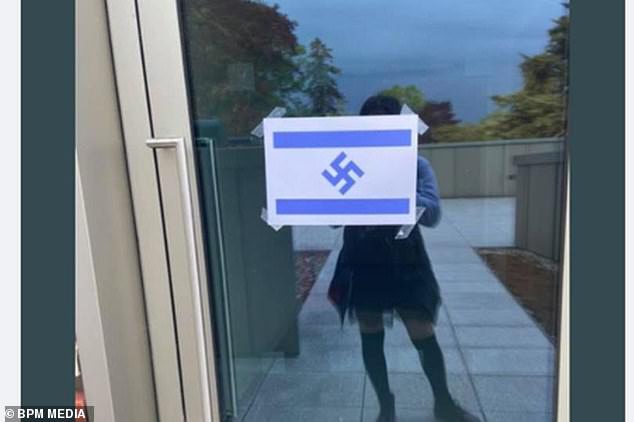 In one instance, a poster with a swastika in place of the Star of David on the flag of Israel (pictured above) was displayed outside the premise’s library

She said: ‘Whichever n***e thought it was okay to put the Nazi swastika on our library terrace, f*** you.

‘I’ve taken your sh***y little sign down that was very neatly taped. You have no place at this university and I hope you get kicked out.’

A spokesperson for the university branded the behaviour ‘unacceptable’ and said it ‘will not hesitate to use the full range of sanctions available’ in disciplinary procedures.

The university’s Jewish society said the incident ‘cannot be tolerated’ and urged the institution to ‘take a stand against such vicious prejudice.

They added in a statement posted on Instagram: ‘Opposition to the Israeli government’s actions does not justify these acts of bigotry, just as Islamist violence does not justify Islamophobic bigotry.

‘Royal Holloway has garnered a reputation of being a liberal, diverse and welcoming university, yet these images and experiences make Jewish students feel more and more as if that doesn’t apply to them.’

It follows a swastika imposed on an Israel flag being displayed during a march in Sydney, Australia, last weekend as participants protested Israel’s actions during the current conflict with Palestinian militants in the Gaza Strip.

The man who took a photo of the symbol told 7NEWS: ‘I was walking with my grandma who is a Holocaust survivor when we saw this – (it was) so horrible for her. 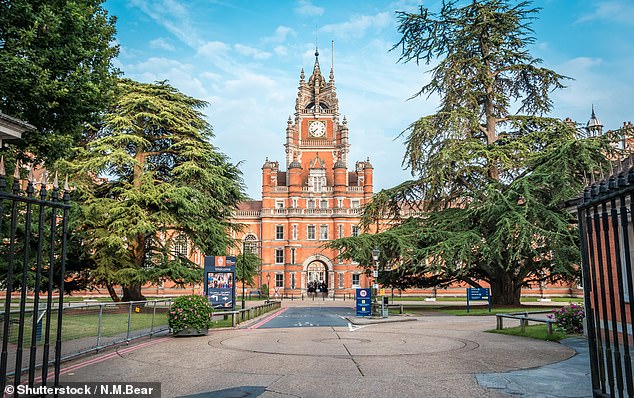 ‘The government should be banning things like this and arresting this man.’

A spokesperson for Surrey Police said: ‘A 21-year-old man from Egham and a 19-year-old woman from Englefield Green were arrested last night on suspicion of offences contrary to section 18 of the Public Order Act.

‘They were both issued with police bail earlier this evening (19 May) while our investigation continues.

‘This relates to a number of reports of hate crime at Royal Holloway University. We are working closely with the university as our investigation progresses.’ 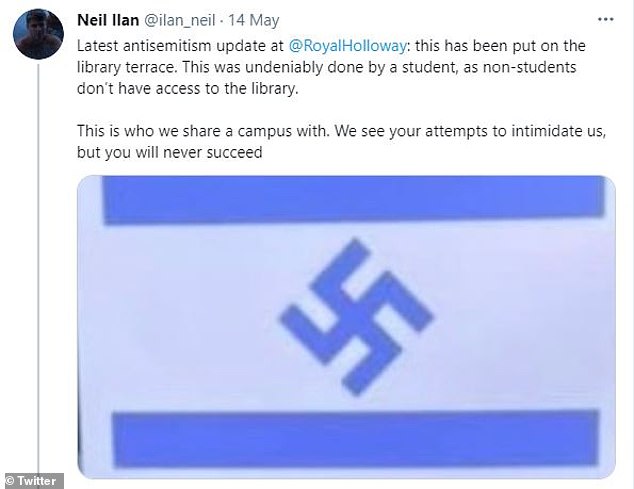 One student tweeted: ‘This was undeniably done by a student, as non-students don’t have access to the library. This is who we share a campus with’

‘Our university has an abhorrence of violence, discrimination and harassment and we believe that we all have a role to play in maintaining a peaceful, respectful, inclusive and welcoming community, on and off-campus.

‘We witnessed unacceptable behaviour on our campus and online last weekend which we reported to the Police who have now taken action and arrests have been made.

‘We are also following our own disciplinary procedures and will not hesitate to use the full range of sanctions available to us.

‘We have encouraged any member of our community who feels concerned about their wellbeing, or are concerned for someone else, to contact our student or staff welfare teams via [email protected]’