Police in Rikki Neave murder probe ‘IGNORED scientific evidence to pursue case against his mother’: BBC investigation claims detectives dismissed findings that proved six-year-old was killed in woods and not at home

The mother of murdered schoolboy Rikki Neave was wrongly pursued for his killing after police ignored evidence casting doubt on their theory that she was the culprit, a new podcast has revealed.

The six-year-old was found strangled, naked and arranged in a ‘star pose’ in woods near his home in Peterborough, the day after he was reported missing by his abusive mother Ruth Neave on November 28, 1994.

Neave was initially Cambridgeshire Police’s prime suspect and went on trial for his murder in 1996.

The police claimed that she killed her son at his home before carrying his body to the nearby woods in a push chair. She was found not guilty, but was sentenced to seven years in prison after admitting child cruelty.

For nearly two decades, the case remained unsolved until Cambridgeshire Police agreed to re-open the investigation in 2015 following repeated campaigning by Neave.

In April, 40-year-old James Watson was convicted of Rikki’s murder after damning new evidence came to light. He was sentenced to life in prison in June.

However, new BBC podcast The Boy in the Woods has revealed how the police ignored expert forensic evidence that blew a hole in their case, whilst the jury at Neave’s trial were not alerted to the findings.

Scientist Professor Tony Brown, who was tasked by police with examining Rikki’s clothes early in the original investigation, found that mud on his shoes proved the child walked into the woods, but never walked out again.

He told the BBC that he also offered to test Neave’s push chair for mud from the woods, but the object was never sent to him. At the time, the law allowed police not to disclose evidence to a jury that undermined their case.

The senior officer who led the 2015 re-investigation said in response to the BBC’s findings that he and his team could not explain ‘why this evidence was not used originally,’ but added the failings ‘would not happen now’. 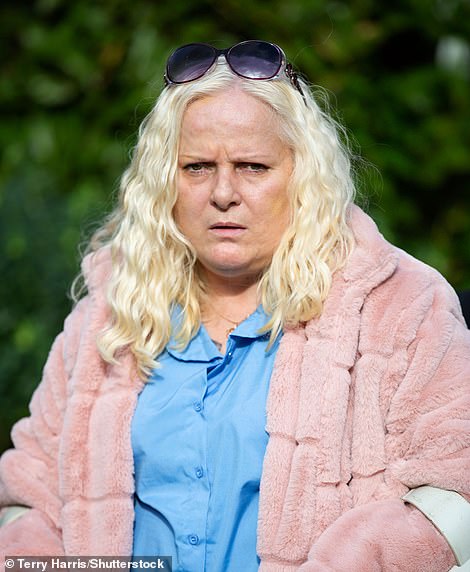 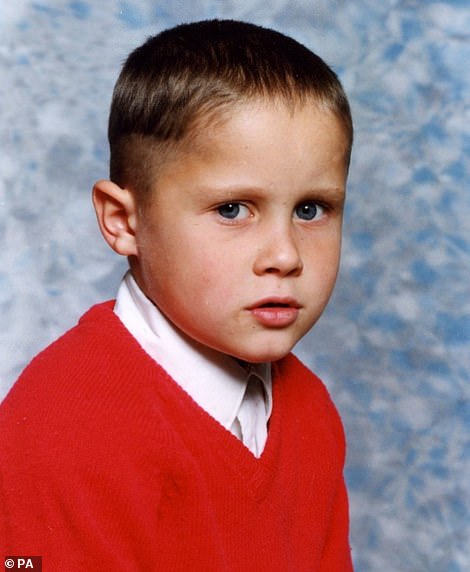 The mother of murdered schoolboy Rikki Neave was wrongly pursued for his killing after police ignored evidence casting doubt on their theory that she was the culprit, a new podcast has revealed. Above: Ruth Neave in 2020; Rikki in his school uniform

Watson was finally brought to justice in part because of forgotten pieces of Sellotape that contained clothing fibres carrying his DNA.

He was 13 when he carried out the crime. Whilst nearly all of the evidence that had been collected in the original investigation had been destroyed or returned to Rikki’s family, police found envelopes containing the pieces of sticky tape.

They bore fibres collected from Rikki’s clothing that were found to be a ‘billion to one’ match to Watson’s DNA.

Suspicion originally fell on Rikki’s mother because of the documented instances of abuse that she had inflicted on her son.

She was described in Watson’s trial as a ‘wholly unfit mother’ who used Rikki as a drug runner and ‘punch bag’.

On one occasion, Rikki was allegedly left screaming after being locked out of the house in his pyjamas; in another it was claimed Neave had held her son upside down on a bridge as he screamed.

She had also grabbed the child around his throat, pushed him against a wall and lifted him up ‘to the point his feet were about a foot above the ground’.

In the original case, Watson’s name was discounted very quickly. 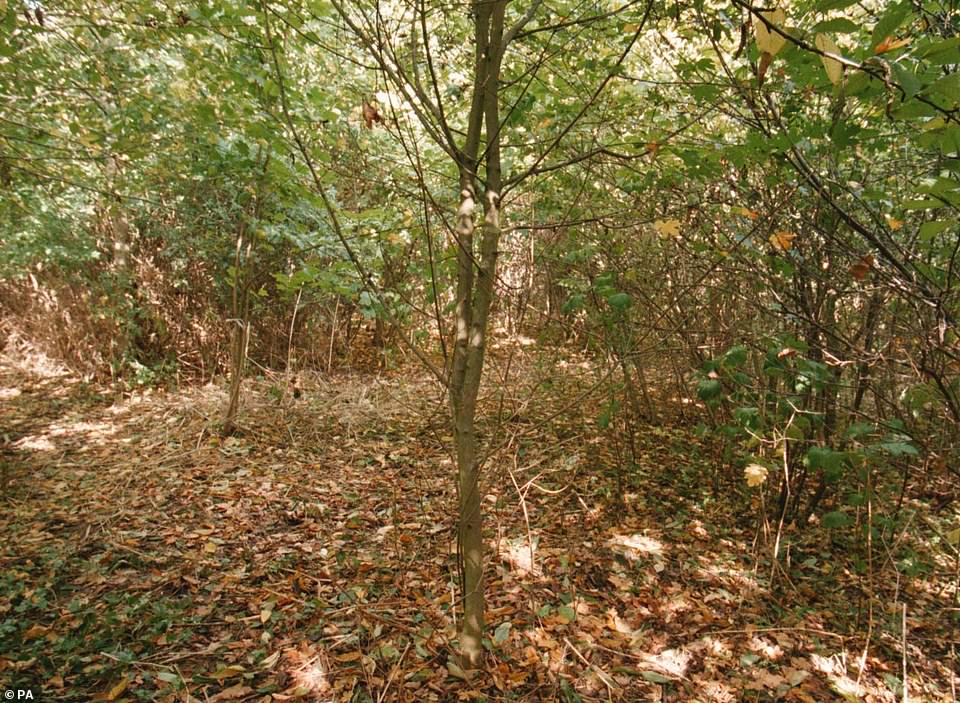 After Rikki was found dead, it emerged that his body was clean – as if it had been freshly bathed – and the position of his arms, hands and legs symmetrically set out. Even his thumbs were in same position. Above: The spot where his body was found 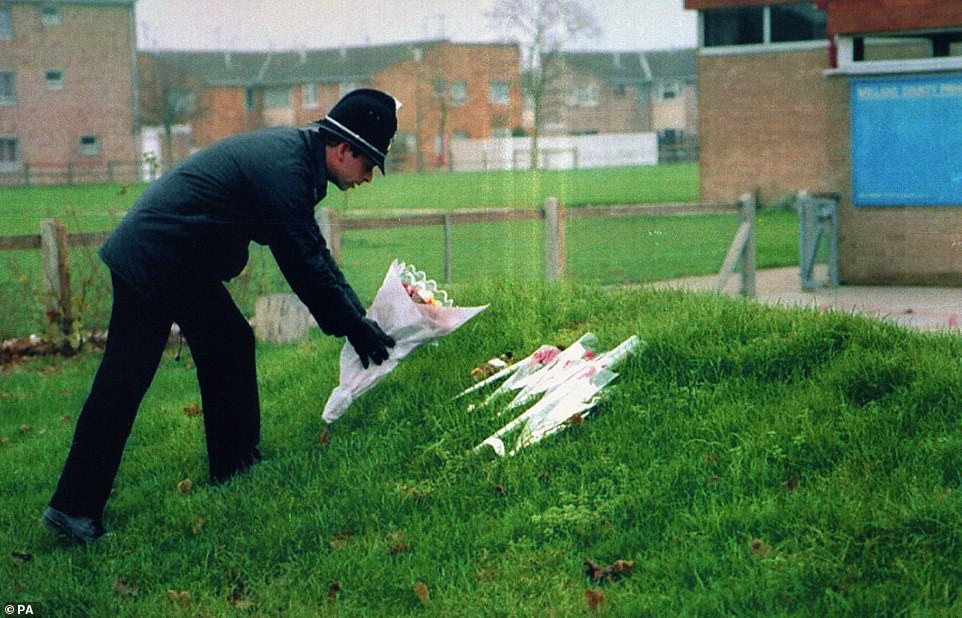 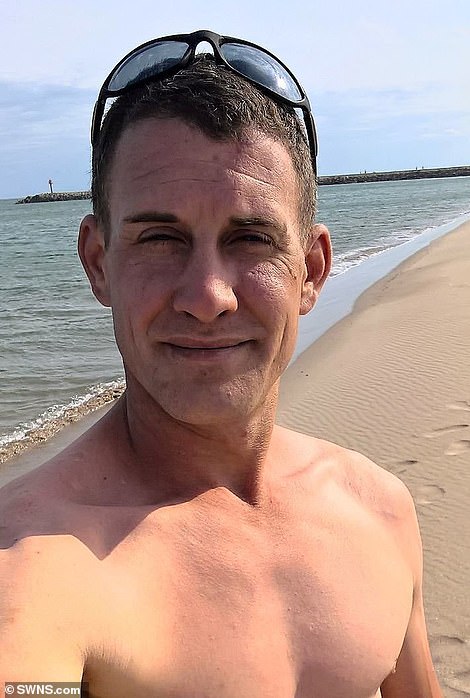 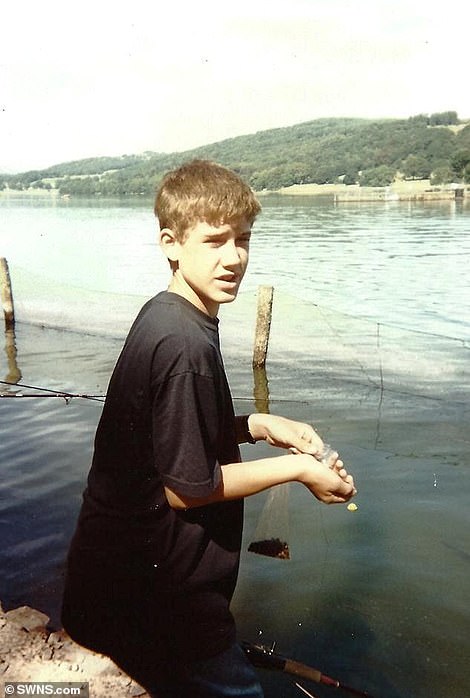 Today, 40-year-old James Watson (pictured right when he was a child), who was 13 when Rikki disappeared, was convicted at the Old Bailey of the child’s murder – seven years after new evidence was found in a ‘cold case review’ 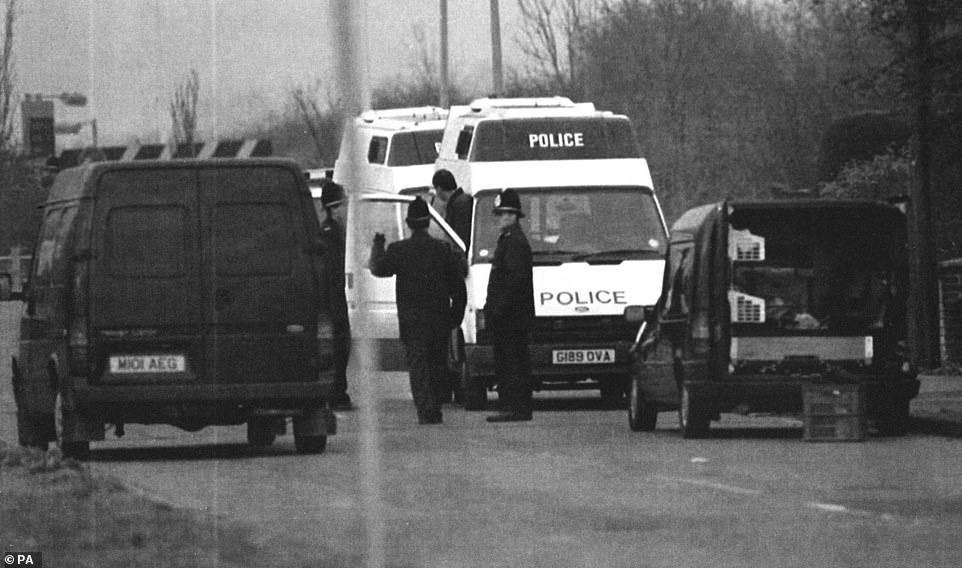 Police at the scene where the naked body of six-year-old murder victim, Rikki Neave, was found in undergrowth less than 500 yards from his home 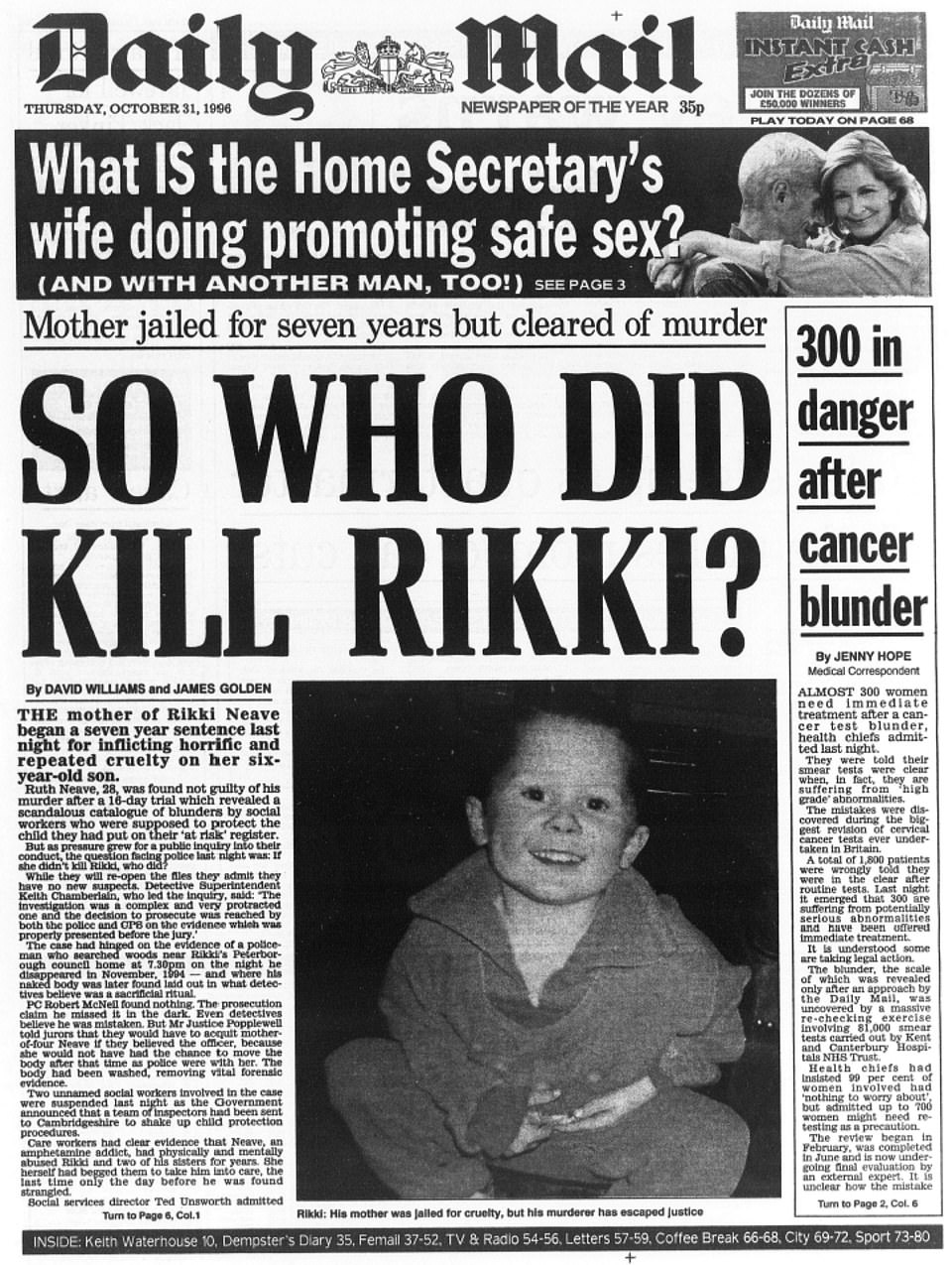 The Daily Mail’s original report of when Ruth Neave was found not guilty of her son’s murder. It noted how care workers involved in the case had been suspended

Speaking on the Boy in the Woods podcast about his examination of Rikki’s belongings, Professor Brown said: ‘I focused on one shoe, the right shoe, because it had mud on the positive tread and that is very significant because the underside of your shoe – the negative bits, the grooves – they hold mud, even if you have been in a muddy place and then walked on the streets, they will go on holding mud.

‘But the positive tread, that is the ridges, they don’t normally have mud on them as soon as you go on to tarmac, or a pavement or a hard surface.

‘And the fact that there was actually a lump of mud which looked the same as the mud that was on the rest of the shoe, that said to me that the shoes had walked in to the wood but hadn’t walked out. And that is critical’.

Presenter Winifred Robinson said Professor Brown also offered to test the pushchair that police claimed Neave used to carry her son’s body, but it was never sent to him.

‘He told me it was the only case in his career where the evidence was disregarded,’ she added.

‘From the outset, we were determined to review all of the evidence available from the original case and understand what it told us about Rikki’s death and the person responsible for his murder.

‘This was done taking into consideration the forensic advances of the past three decades and the enhanced methodology now adopted in policing when investigating serious crime.

‘This was a completely new team and policing has evolved significantly in three decades, this includes the rules around disclosure [Criminal Procedures and Investigations Act 1996].

‘As a new team we can’t say why this evidence was not used originally but we know that this would not happen now and our re-investigation has resulted in the person responsible for Rikki’s death finally being found and dealt with. Providing Rikki’s family with long awaited justice.’

Mr Fullwood previously said that the original investigating officers had a ‘tunnel vision’ focus on Neave.

He said he believed that if Neave’s treatment of her son had not been so brutal, the case would have been re-opened sooner.

He said there was ‘always a feeling’ among the officers involved in the original case that Neave ‘may have done it’.

‘They interviewed me for days and all the time I begged them to try to find my son’s real killer,’ she said.

‘What no-one knew until your investigation was how the police had discarded scientific evidence that proved I could not have killed him in the way they later described in court.

‘They have destroyed my life. I am just relieved the truth is finally out.’

She added: ‘I am just so furious because they had just had me in their sights and they would not let me go, making stories up, and I have got to live with them stories for the rest of my life and I am so pleased that somebody’s took their time to turn around and do such a project, to clear my name.’ 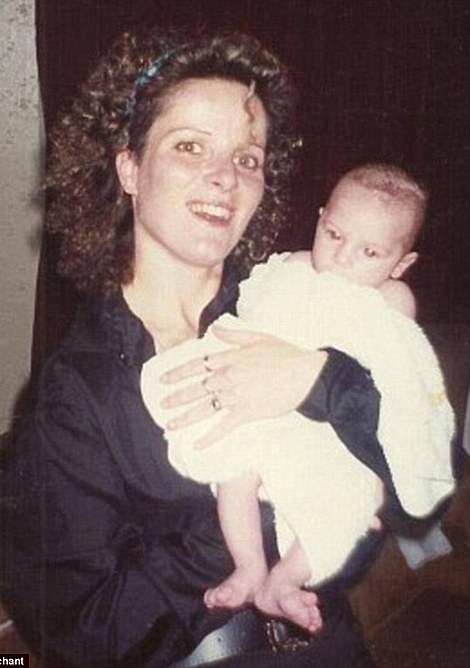 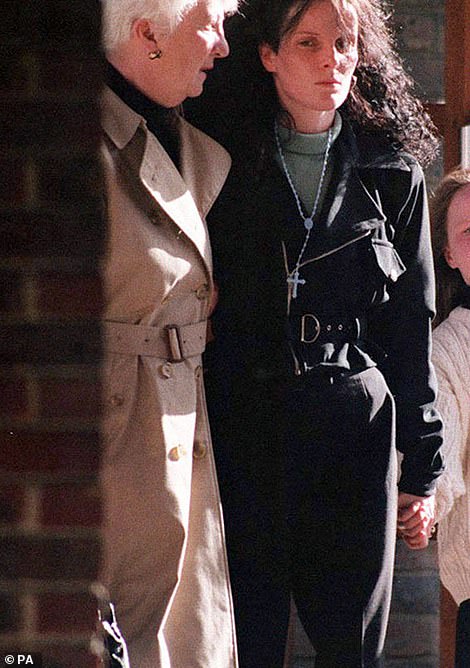 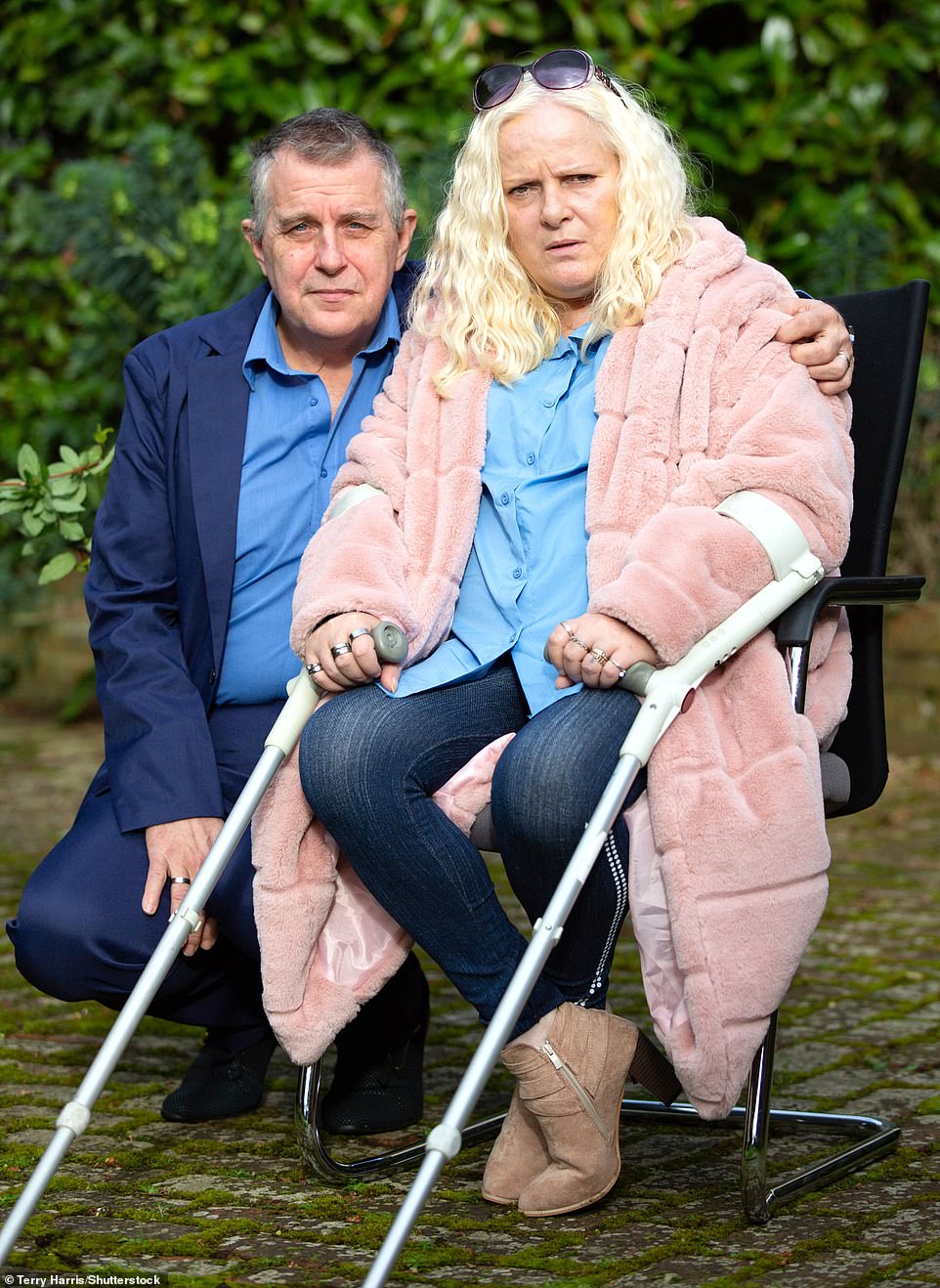 Neave was alleged to have treated all her children in a ‘savage’ manner. She is pictured above in February 2020 with her husband Gary Rogers

Watson was arrested on suspicion of murder in 2016. By then, he was already a serial offender.

Among his misdeeds was the setting alight of a a British Transport Police station in Peterborough.

After he was bailed, Watson fled to Portugal, where he posted photos of himself on the beach.

He had boasted about having left the UK in a mobile home, despite having no passport.

He then ended up homeless and begged to be flown home in emails to his probation officer.

Watson was eventually arrested in Lisbon and flown back to the UK. It was not until 2020 that he was charged.

In the face of the DNA evidence linking him to Rikki’s murder, the criminal claimed he had picked the child up during a brief encounter in the street on the day of his disappearance.

He said he had lifted Rikki up so he could look through a hole in a fence to watch diggers at work.

But he also claimed that he did not know ‘what the true events are’ and said it was ‘possible’ he had not touched Rikki.

However, police were able to establish that the fence in question was not there in 1994.

Witnesses also saw Watson leading RIkki to the woods an hour before the schoolboy was killed.

He had also been reported months earlier for sexually assaulting a five-year-old classmate of Rikki’s.

Days before the killing, he told his mother about an imagined radio report of a two-year-old child being kidnapped, strangled and left in a dyke.

Jurors also heard during his trial that he had a ‘grotesque interest’ in child murder.

This testimony contradicted Watson’s initial claim that he had never met the child.

Watson was convicted of murder after 36 hours of deliberation by jurors. 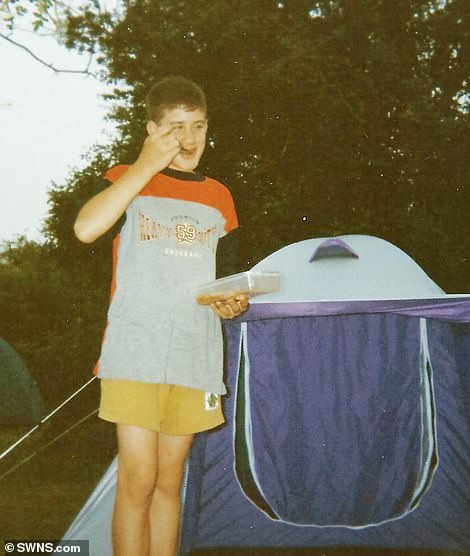 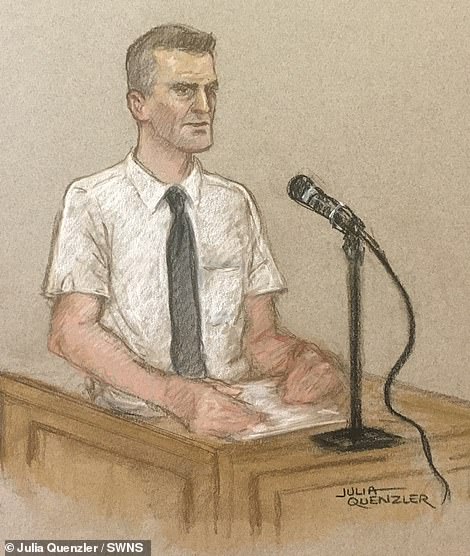 Watson is seen above left during a camping trip when he was a child, and right during his trial at the Old Bailey