Police have launched a hate crime investigation after a group of students stole vegan cafe’s advertising board, altered it to say staff were ‘animal unfriendly’ and left rude notes in a series of pranks.

Staff at Nottingham’s Crocus Cafe claim they feel ‘threatened’ following a series of incidents in recent weeks that they believe involved undergraduates from one of the city’s two universities.

Notts police have launched a hate crime investigation and a ‘support programme’ for the comnplainant while the city’s universities also say they are looking into the incidents.

The cafe’s manager Phoebe Thornton said the first happened on September 6 when a message reading ‘f*** ya vegan b*******’ was left on the back of a coronavirus test and trace form – along with a drawing of a penis. 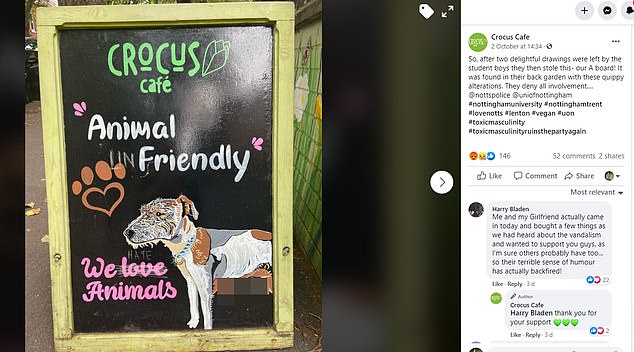 The cafe’s sign was found in a garden, altered to say ‘animal unfriendly’ and ‘we hate animals’

Miss Thornton, 29, told Notts Live: ‘That was when it wasn’t a legal requirement to do it, people were just encouraged to do it (follow the coronavirus procedures).

‘We picked up the form when they had left and noticed that they had drawn a (phallic shape) instead of writing their details on.

‘The person who found it gasped when she found it – and she was really upset.

‘I took a picture of it and just kind of left it and then I told my other colleagues and then that was pretty much it.’

A week later, the group returned to the cafe and asked staff a series of questions including ‘Do you serve bacon?’, and ‘What’s the closest thing you have got to a bacon sandwich?’, before allegedly leaving another offensive note.

Then, on September 27, an advertising board was taken but was found a few days later from a local garden- altered to say ‘animal unfriendly’, instead of ‘animal friendly’ and the word ‘love’ replaced with ‘hate’ in a sentence that originally read: ‘We love animals’

The  altered sign had also another drawing of a penis.

The incidents were reported to Notts Police, as well as the University of Nottingham, and Nottingham Trent University.

Officers have now put a ‘support programme in place for the victim’ while the universities have also begun a probe.

Following its recovery of the sign , the cafe posted on Facebook: ‘So, after two delightful drawings were left by the student boys they then stole this – our A board! It was found in their back garden with these quippy alterations. They deny all involvement.’ 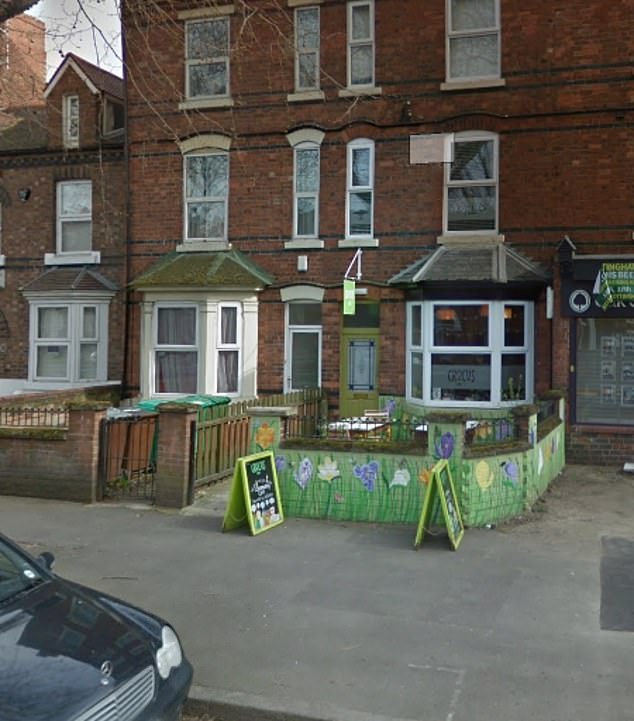 A spokesman for Notts Police said: ‘It was reported that an advertising board was taken from the Crocus Cafe, in Lenton Boulevard, on Sunday, September 27, 2020. It was found a few days later in a nearby garden and had been vandalised.

‘It was also reported that a note containing offensive words and pictures had been left in the cafe.

‘A hate crime is any incident where someone is targeted because of their identity.

‘Hate crime can take any shape and isn’t always illegal behaviour, but it is always motivated by prejudice against protected characteristics such as race, religion, sexual orientation, disability, transgender, misogyny and alternative sub-culture.’

Sergeant Andrew Hallsworth said: ‘Notts Police take hate crime and incidents very seriously and will always look to take appropriate and proportionate action against those found to commit such offences.

‘Inquiries were made to establish the circumstances of these incidents. In this case, all parties involved were spoken to by an officer and a support programme has been put in place for the victim.’

No arrests have been made in connection with the investigation.

A University of Nottingham spokesperson said: ‘We are very sorry to hear about the recent problems that have been experienced by the Crocus Cafe in Lenton, which is a wonderful resource for the whole community, including many of our students who both use the cafe and who have volunteered there in the past.

‘This is clearly unacceptable behaviour, and our off-campus team is investigating thoroughly to establish whether any University of Nottingham students were involved in these incidents.

‘Any anti-social behaviour is taken extremely seriously by the university and we have strict measures in place to tackle students causing a nuisance in the community through our student disciplinary code.’

A spokesman for Nottingham Trent University said: ‘We have been made aware of alleged student behaviour issues relating to a café in Nottingham and are investigating.

‘All NTU students are made aware of the importance of being a good neighbour and the impact they have on their local communities.

‘We proactively encourage residents to contact us should there ever be any issues with student behaviour.

‘Any issues raised are taken very seriously and we take swift action where our students may be in breach of our student code of behaviour.’

END_OF_DOCUMENT_TOKEN_TO_BE_REPLACED

END_OF_DOCUMENT_TOKEN_TO_BE_REPLACED
Recent Posts
We and our partners use cookies on this site to improve our service, perform analytics, personalize advertising, measure advertising performance, and remember website preferences.Ok