Victorians spending time alone outside may be the first beneficiaries of new face mask rules as the Andrews government comes under increasing pressure to relax the requirements before the hot weather hits.

Premier Daniel Andrews will release the full details of what "COVID-normal" looks like at the end of next week, in line with the timing of the original roap map.

But he indicated on Sunday the process could move slower than some may prefer. 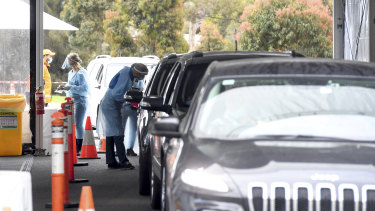 A pop-up COVID-19 testing site has been set up at the Wyndam City Council Civic Centre as part of a testing blitz in Wyndham and Hume. Credit:Penny Stephens

"I think the area we will move first will be when people are out on their own, well away from others," he said. "It'll always be a situation where you carry the mask and if for some unexpected reason you would come into contact with people, then you would wear that mask. I think that's probably the first change."

The cautious approach came as Victoria recorded its 16th 'double doughnut' day of no new COVID-19 cases or deaths. For the first time since March 13, Victoria also recorded a fortnight with no new mystery cases.

Since the start of the pandemic, there have been 3762 mystery cases (an infection that could not be traced to a known cluster), making up 18.5 per cent of the state's total 20,345 COVID-19 cases.

Deputy Chief Health Officer Allen Cheng on Saturday said one in eight of the state's mystery cases were erroneously deemed to have come from an unknown source due to the state's contact-tracing system becoming overwhelmed.

Contact tracing will be scrutinised by a Victorian Parliamentary inquiry this week.

The heads of contact-tracing company Salesforce; the Australian Medical Association; Barwon Health's department of infectious diseases; and Helloworld Travel (which received a $7.6 million state contract to provide contact tracers) will be among those who are questioned on Monday.

Chief Scientist Alan Finkel and Cedar Meats owner Tony Kairouz are among those who will face the inquiry on Wednesday.

There are still three active cases of coronavirus in the state. A positive test result on Saturday afternoon was someone who had previously been diagnosed with COVID-19 in July and cleared in August, the Health Department said.

"The result is thought to be persistent shedding and not a new infection," the department said.

"Precautionary public health actions are being undertaken while further testing is under way. There are no known public exposure sites linked to this case. The Expert Review Panel will meet today [Sunday] to further examine this case."

Despite the run of 16 "double doughnut" days, Mr Andrews reminded people to get tested if they experienced any COVID-19 symptoms.

"These 16 days are a very impressive thing, and every Victorian should be proud," he said. "[But] it is fragile."

Mr Andrews said mask rules and Christmas gatherings would be among announcements made on Sunday.

The Andrews government is under intense pressure from some epidemiologists, a growing number of Victorians and the opposition to relax mask-wearing rules as the weather begins to warm up. 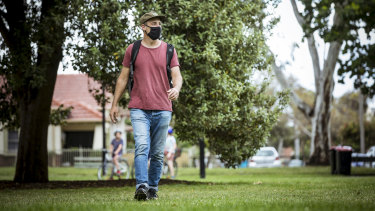 Chris Parasi, who was walking with his seven-year-old son at Brunswick Park on Sunday afternoon, said he would welcome the relaxation of mask-wearing rules in low-risk settings.

"There's a confidence that [health authorities] know where the active cases are, and so there's not really local transmission going on," he said. "In close spaces and large congregations, we should be required to wear them, but where there's no one, there should be no problem."

Opposition Leader Michael O'Brien reiterated his calls on Sunday, saying Victorians deserved more freedom in the wake of 16 days of no new cases.

"Our mask rules are out of date and out of touch," he said. "There absolutely needs to be instances where masks are required – in a supermarket where you can't socially distance, absolutely we must be wearing our masks. But when you're outside and you can socially distance, the experts say it's safe to take your masks off."

Mr Andrews earlier on Sunday raised the prospect that Victorians travelling interstate could be required to follow their home state's coronavirus restrictions, such as mandatory mask-wearing and density limits on gatherings.

He said he would this week speak with Chief Health Officer Brett Sutton about the possibility ahead of the country reopening its borders to Victoria from later this month.

However, later on Sunday afternoon his office said any rules in place in other states were a matter for those states.

"The CHO directions apply only to people when they are in Victoria," a government spokeswoman said. "We will have more to say about the next steps towards COVID-normal later this week."

END_OF_DOCUMENT_TOKEN_TO_BE_REPLACED

END_OF_DOCUMENT_TOKEN_TO_BE_REPLACED
Recent Posts
We and our partners use cookies on this site to improve our service, perform analytics, personalize advertising, measure advertising performance, and remember website preferences.Ok