Charming new pictures have emerged of Prince Harry and conservationist Dr Jane Goodall, strolling around Windsor as he interviews her for wife Meghan Markle’s September edition of Vogue.

The stunning photos, two of which shot in the couples signature black and white style were added to the Sussex Royal account in order to promote the interview in which the pair candidly discuss everything from the environment, to how many children the Duke and Duchess will have.

The first picture in a series of three shows Harry holding an umbrella over Dr Goodall as the pair laugh together during the interview.

The second, shot in colour, shows the two smiling as they look out at the greenery of Windsor as they sit on a bench. This is while the third shot shows the pair sat on the same bench, as Harry holds onto his wedding ring. 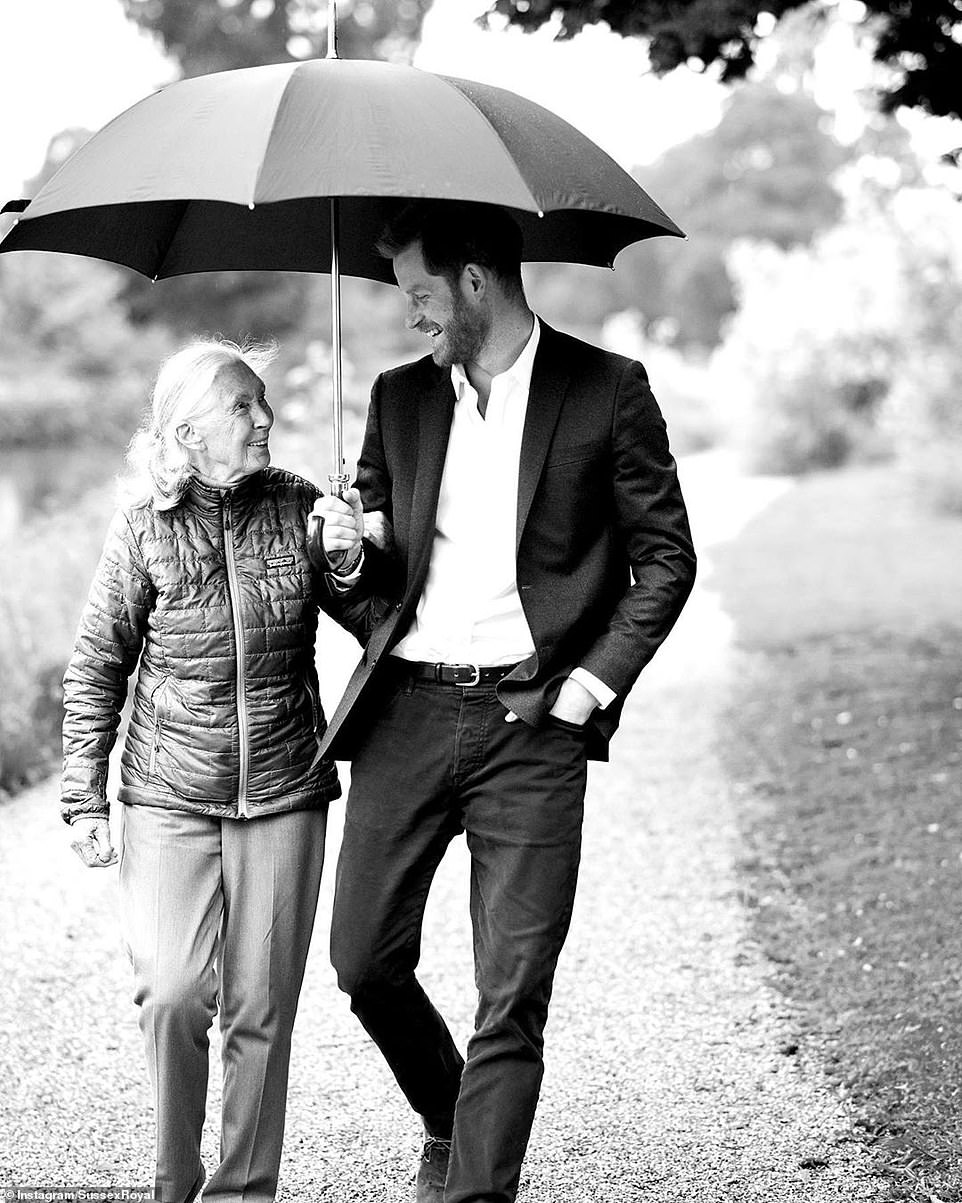 For Meghan’s September issue of Vogue, Prince Harry spoke with Dr. Jane Goodall for a conversation on the environment 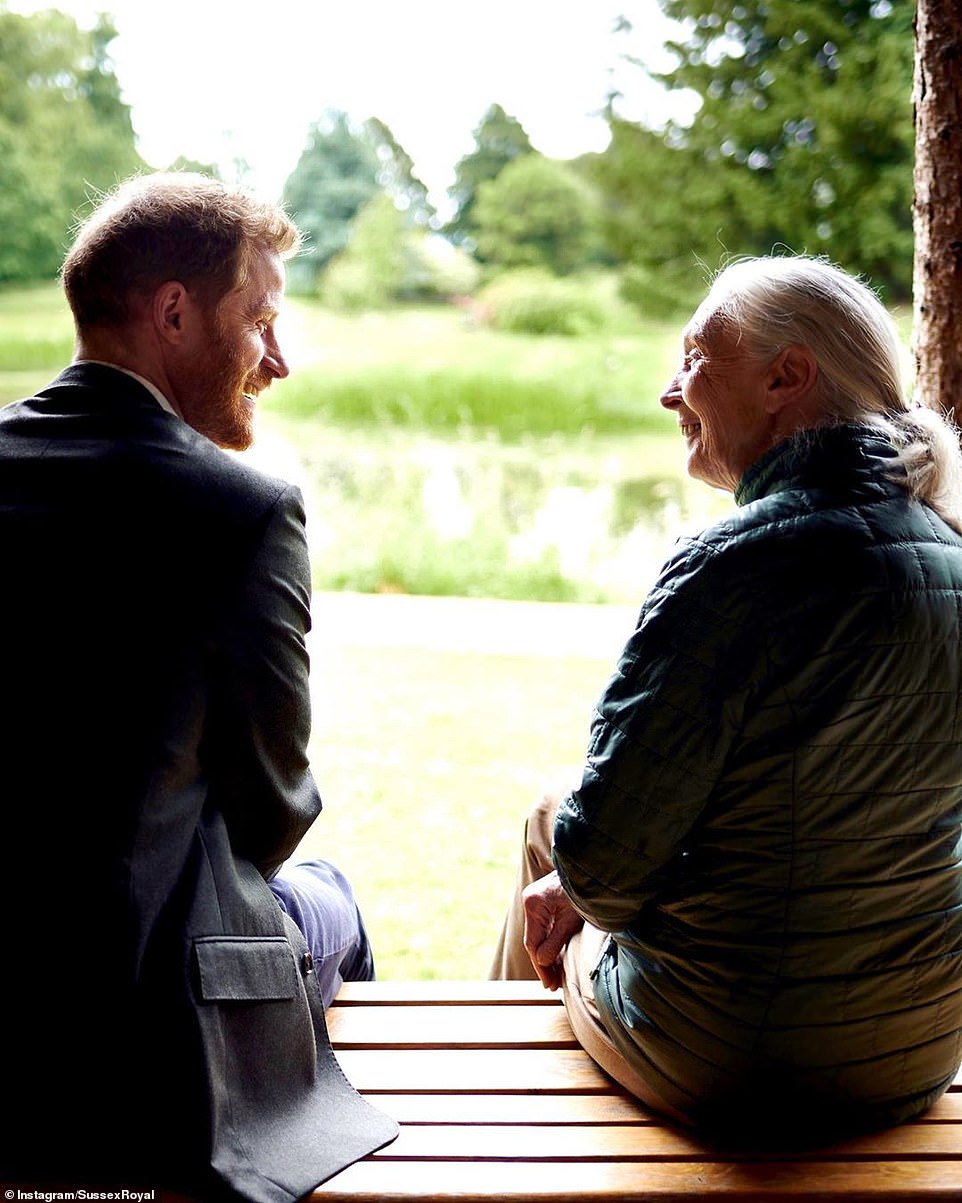 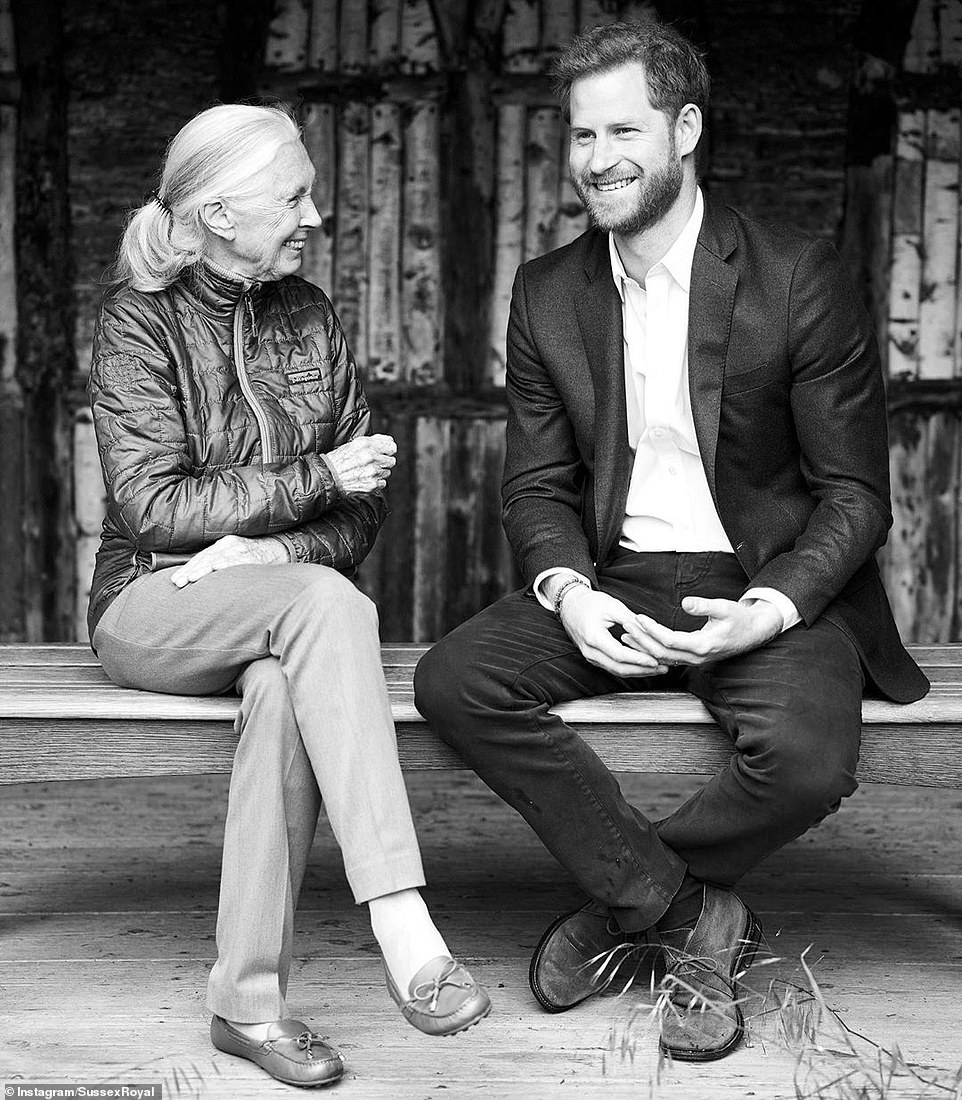 The Prince seemed to be dressed in casual jeans with lace-up loafers. He didn’t wear a tie for the interview but wore a crisp white shirt with a suit jacket.

This is while Dr Goodalll wrapped up against the ever-changing British wearing, wearing a water proof coat, boat shoes and tailored trousers.

In the candid interview with Dr Goodall, Harry revealed that he and Meghan are only planning to have two children in a bid to help save the planet.

Discussing the ‘terrifying’ effects of climate change, he assured her he and the Duchess, 37, are only planning on having one more child after the birth of their son Archie.

He said becoming a father has made him see the world differently and the couple only want ‘two maximum’ to help protect the environment.

By not having a child, the carbon footprint of an individual living in a developed country would be reduced on average by an extra 58.6 tonnes of carbon dioxide every year, based on emission rates in 2017.

British charity Population Matters, of which Sir David Attenborough is the patron, is one of the leading campaigners on population control and has urged parents to ‘Stop at Two’.

However, Prince Harry’s stance is in stark contrast to his brother William and wife Kate, who already have three children, with speculation mounting a fourth could be announced soon.

The Queen meanwhile has four children, although Prince Charles, Prince Andrew, Prince Edward and Princess Anne all have just two.

Despite their commitment to saving the planet, the Duke and Duchess of Sussex are known for their globetrotting lifestyle and use of private jets.

In February, Meghan travelled by private jet for a five-night trip to New York City, where she was thrown a lavish baby shower by her closest friends in a $75,000-a-night penthouse.

One return flight from London to New York generates more CO2 than citizens of some countries produce in a year, according to German nonprofit Atmosfair.

Who is Dame Dame Jane Goodall? Conservationist who has devoted life to protecting wild animals 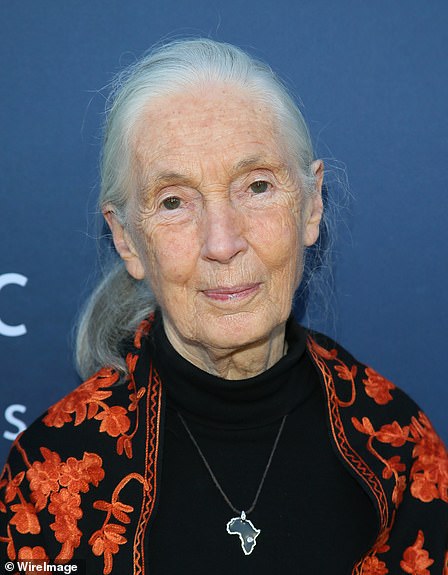 As a child her father, Mortimer Herbert Morris-Goodall, gave her a stuffed chimpanzee as an alternative to a teddy bear.

Family and friends say this was the beginning of a lifelong obsession with animals, chimpanzees in particular.

At the age of 26 she travelled to what is now Tanazania with little more than a notebook and a pair of binoculars.

She set out to meet the creatures she loved and this began 60 years of ground-breaking work to save them from extinction.

Going on to be a full-time primatologist and anthropologist she is considered one of the world’s leading experts on chimpanzees.

She is best known for a 55-year study on their social and family interactions, which began when she first travelled to the Gombe Stream National Park in Tanzania in 1960.

Seventeen years later she founded the Jane Goodall Institute to support research in the Gombe park.

It now has 19 offices worldwide and also works on community development programmes throughout Africa.

It has a youth programme that began in 1991 and was named the Roots & Shoots project.

Today, at the age of 85, she still devotes her entire life to conservation, travelling 300 days of the year to visit them across the globe.

She is a board member of the world’s largest chimpanzee sanctuary outside Africa, the Save The Chips In Fort Pierce, Florida.

She has won dozens of awards, written several books and made many films about her work.

She was named a Dame Commander of the Most Excellent Order of the British Empire in 2004.

END_OF_DOCUMENT_TOKEN_TO_BE_REPLACED

END_OF_DOCUMENT_TOKEN_TO_BE_REPLACED
Recent Posts
We and our partners use cookies on this site to improve our service, perform analytics, personalize advertising, measure advertising performance, and remember website preferences.Ok