London: Britain’s Princess Eugenie, granddaughter of Queen Elizabeth, has given birth to her first child, a baby son, with husband Jack Brooksbank, Buckingham Palace has announced.

Eugenie, the 10th in line to the British throne and younger daughter of the Queen’s third child Prince Andrew and his ex-wife Sarah Ferguson, the Duchess of York, and her son are both doing well, the palace said on Wednesday AEDT. 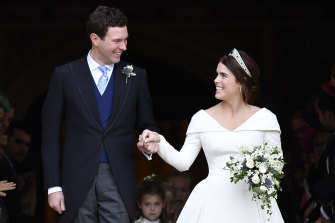 Princess Eugenie and Jack Brooksbank, pictured at their wedding in 2018.Credit:Reuters

Born weighing 8lbs 1oz, the baby is the ninth great-grandchild for the 94-year-old Queen.

“The Queen, the Duke of Edinburgh, the Duke of York, Sarah, Duchess of York, and Mr and Mrs George Brooksbank have been informed and are delighted with the news,” the palace said.

Eugenie, who married Brooksbank at Windsor Castle in 2018, announced the news on her Instagram account with a picture of the new parents holding the newborn’s hand.