HER Majesty the Queen joined Boris Johnson today in welcoming the election of Joe Biden – as the PM said his leadership would be "vital" in in a thinly-veiled swipe at President Trump.

Mr Johnson said there was a "fantastic joint united agenda" between the twoleaders – and vowed to work with him to tackle climate change and rebuild the economy after a "bumpy" period. 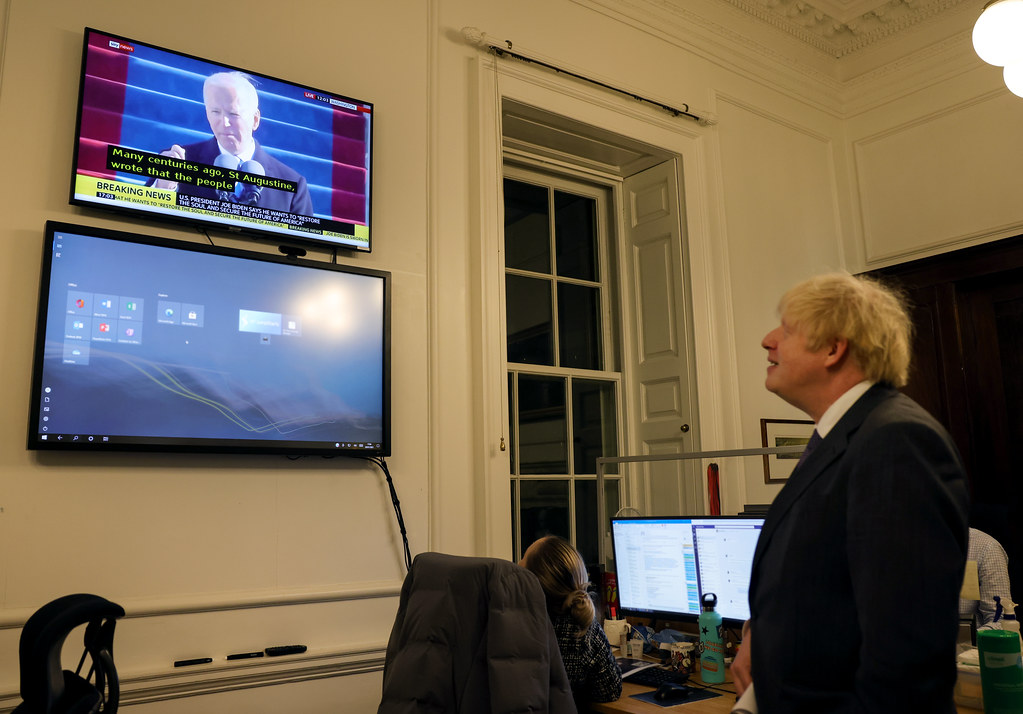 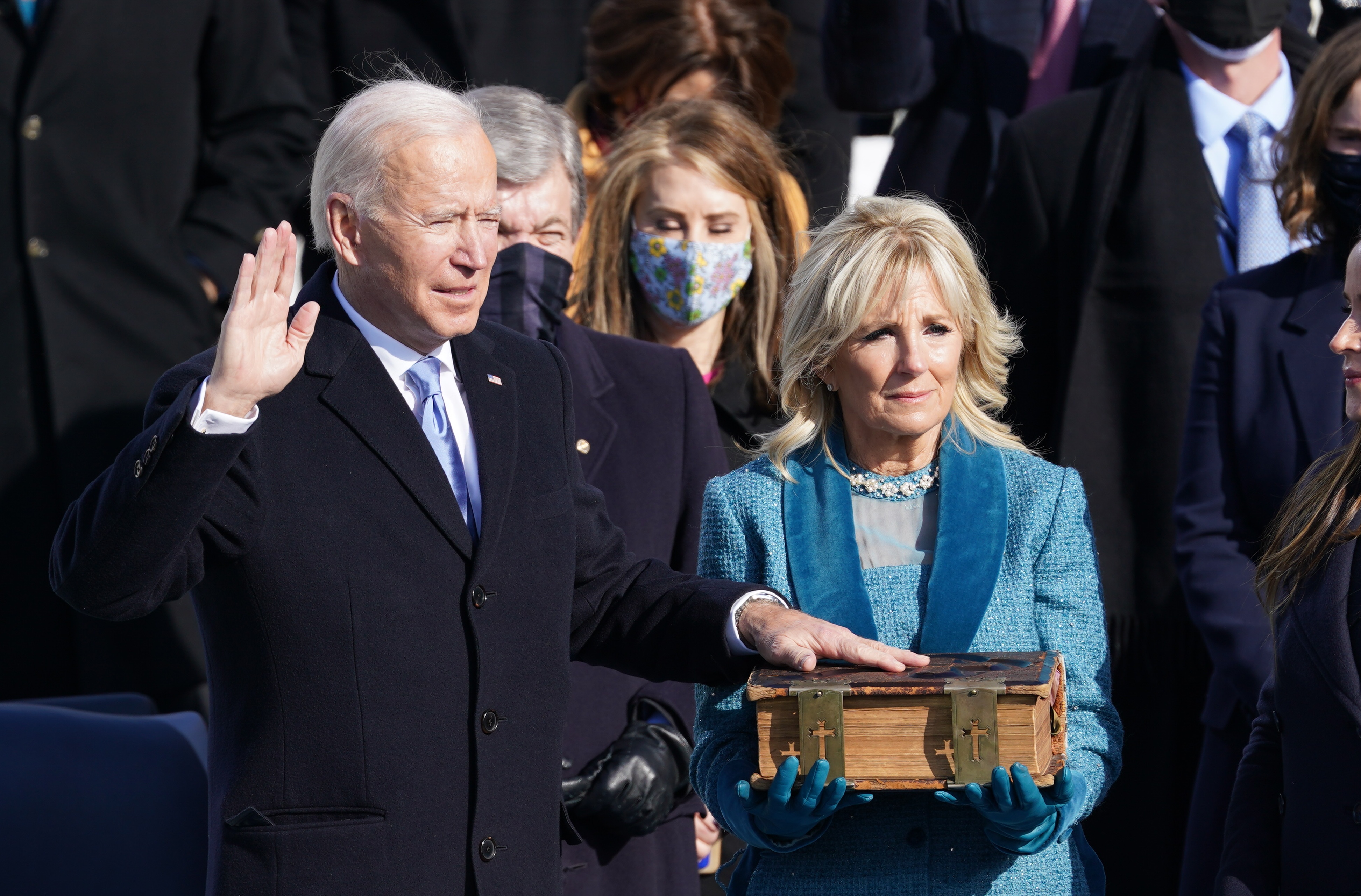 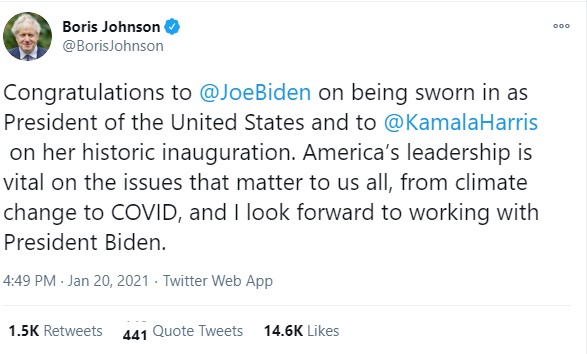 Buckingham Palace said tonight: "Her Majesty sent a private message to President Biden ahead of the inauguration."

And following Mr Biden's swearing in, the PM also tweeted: "Congratulations to @JoeBiden on being sworn in as President of the United States and to @KamalaHarris on her historic inauguration.

"America’s leadership is vital on the issues that matter to us all, from climate change to COVID, and I look forward to working with President Biden."

He said in a pooled clip this evening – minutes after the ceremony: "I really congratulate Biden and Harris on their inauguration.

!It’s fantastic thing for America, for a country that’s been through a bumpy period and for us and America, it’s a big moment,  we’ve got things we want to do together, we’ve got to bounce back from Covid together, working together to unite the world in how you tackle a pandemic."

And he noted Biden's support for Nato- which President Trump repeatedly shrugged off and dismissed during his time in office.

On climate change he described now as a "real opportunity" to push real change – and he hoped to sign them up to a net zero commitment on carbon emissions too.

The PM added: "Our hope this will be the big one – so in the run up to COP 26, we’ll be able to work with the US to achieve that as well."

It came as a senior Cabinet minister declared it's now time to "move on" from the chaotic Donald Trump era.

The PM said together Britain and America can lead the world in the effort to "build back better from the pandemic" and that the pair will to "join forces to protect our planet".

The remarks came after Mr Biden's official inauguration as US President at this evening, at a ceremony in Washington.

He hailed a day of "history and hope" and urged the US to "come together" as he was sworn in. 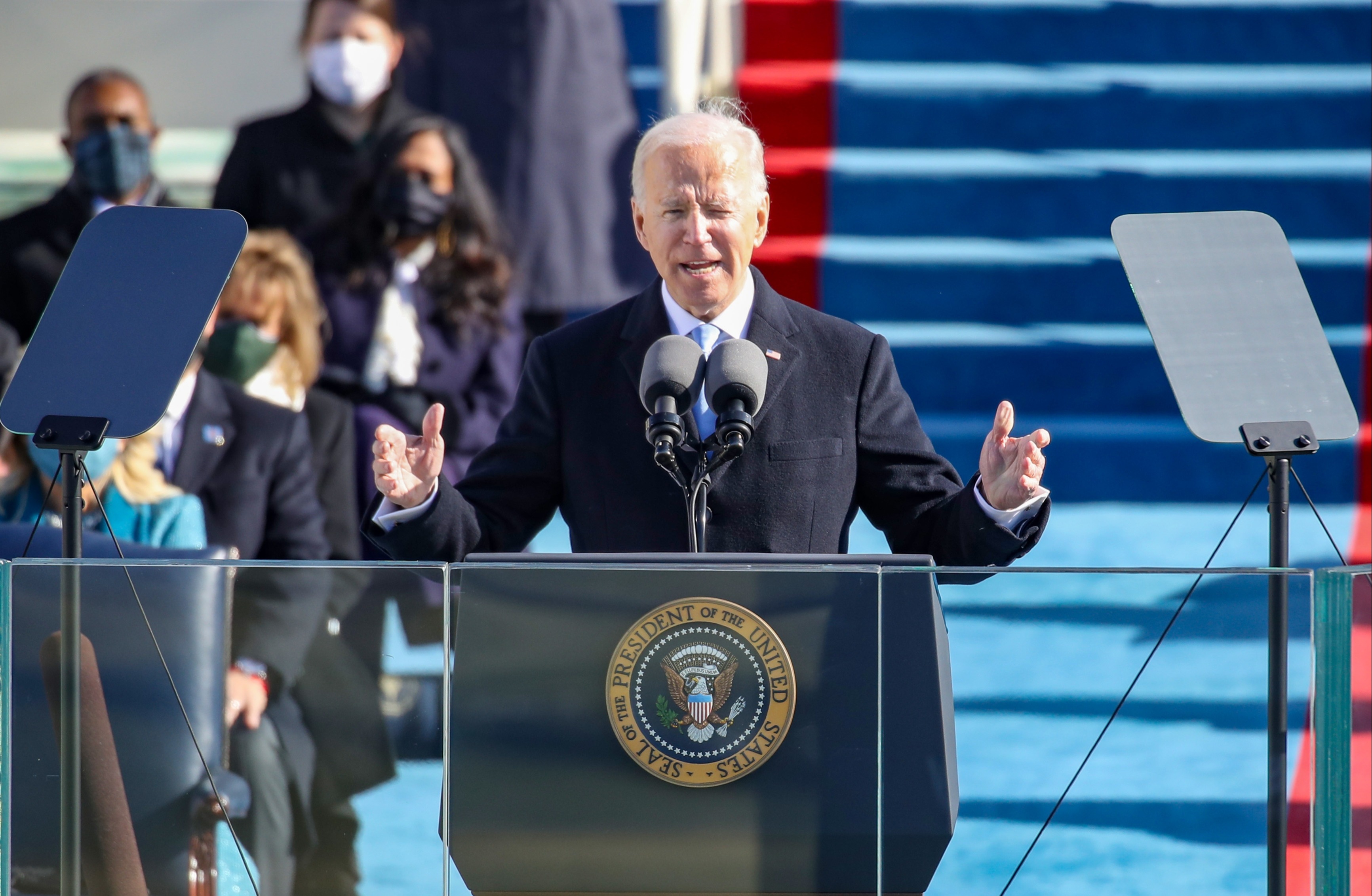 The new president said "my whole soul is in this, bringing America together" as he delivered his inaugural address to a reduced crowd at the Capitol in Washington DC.

He went on to say that "history, faith, and reason show the way of unity".

"We can see each other not as adversaries but as neighbours," he said.

"We can treat each other with dignity and respect. We can join forces, stop the shouting and lower the temperatures.

"For without unity, there is no peace, only bitterness and fury. No progress, only exhausting outrage. No nation, only a state of chaos."

There was tight security following the storming of the Capitol building by Trump supporters.

The new President's first trip outside of North America is expected to be to Britain, when he is due to attend the G7 summit – due to be held in Cornwall in June. 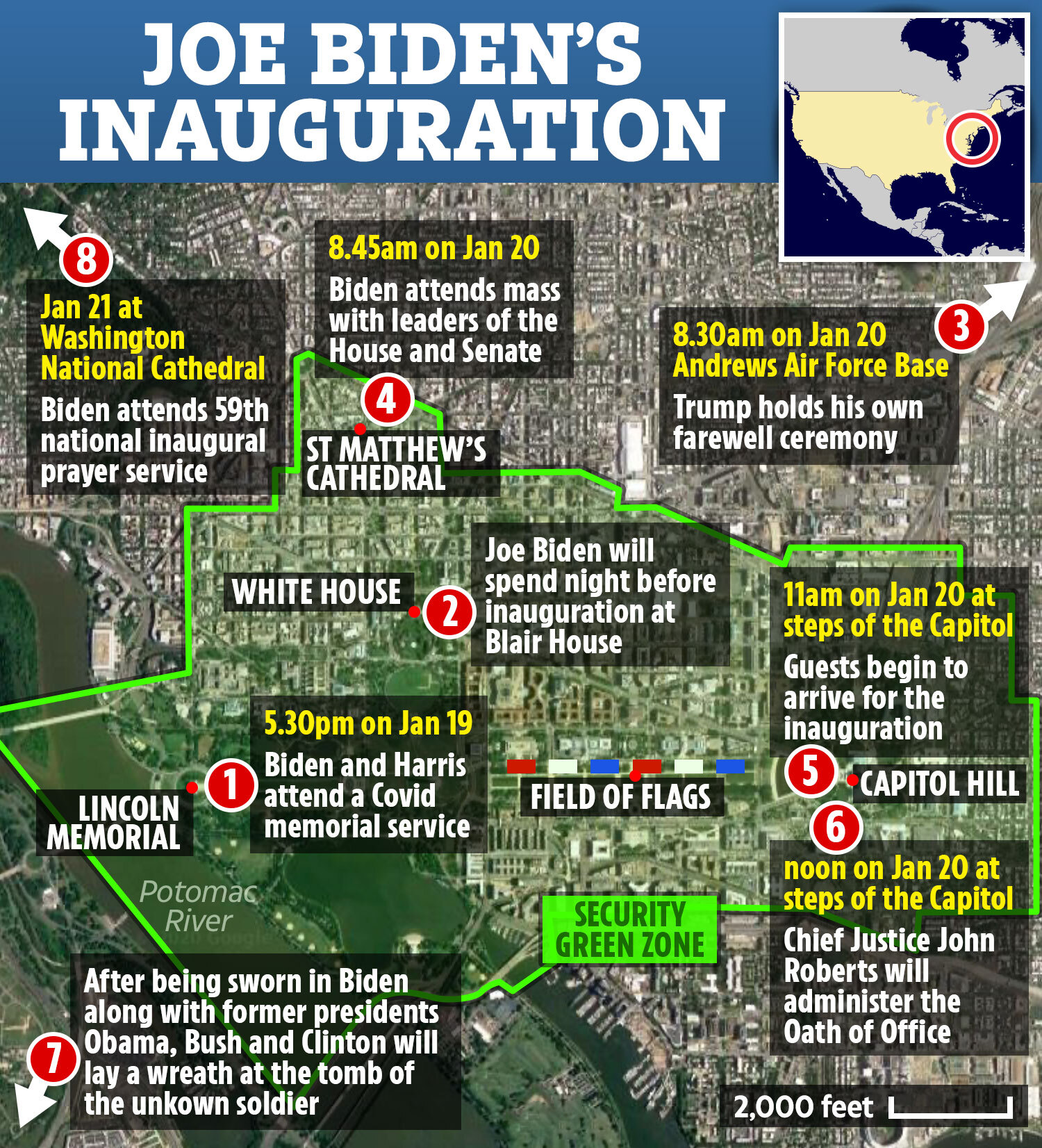 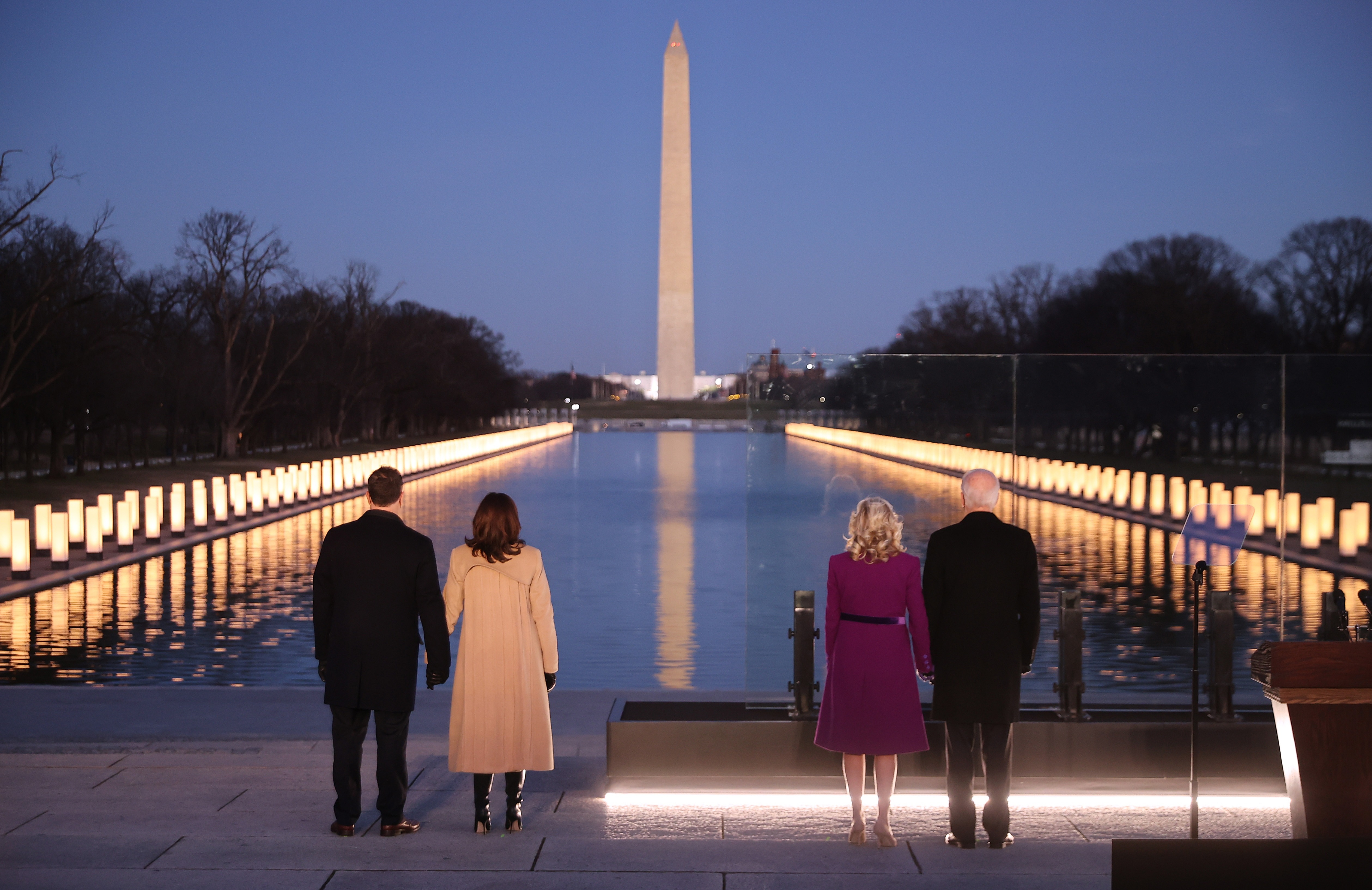 Home Secretary Priti Patel today predicted that the special relationship will prove to be "stronger than ever" and hailed the "new political era" ushered in by Mr Biden's win.

She said the UK and US have an "exciting agenda" to pursue together on the world stage and declared that “we move on now” from the Trump presidency.

No 10 wants to reset relations with Washington and boost trans-Atlantic cooperation on international affairs following four years of largely isolationist US policies.

The PM briefed Cabinet yesterday of his plan to use Brexit to make Britain the US' main "problem-solving partner" on the world stage.

A No 10 spokesman said: "As the world heads out of the pandemic, the UK has an enormous opportunity to take much-needed action to support and influence the global recovery in order to build back better both domestically and internationally.

"The PM concluded Cabinet explaining by that taking a lead on crucial areas such as health, prosperity, climate and nature, we can showcase what global Britain looks like: a strong steward of the international system and a pragmatic and problem-solving partner on the world stage."

Lord Sedwill, who served as Cabinet Secretary from 2018-2020, said the PM would be secretly "relieved" that that Mr Trump lost November's election.

He said: “Those of us who regard ourselves as close American allies have badly missed US leadership over the past four years.

"With Brexit accomplished and the Biden administration ready to re-engage, this is the moment for ‘Global Britain’ to step up." 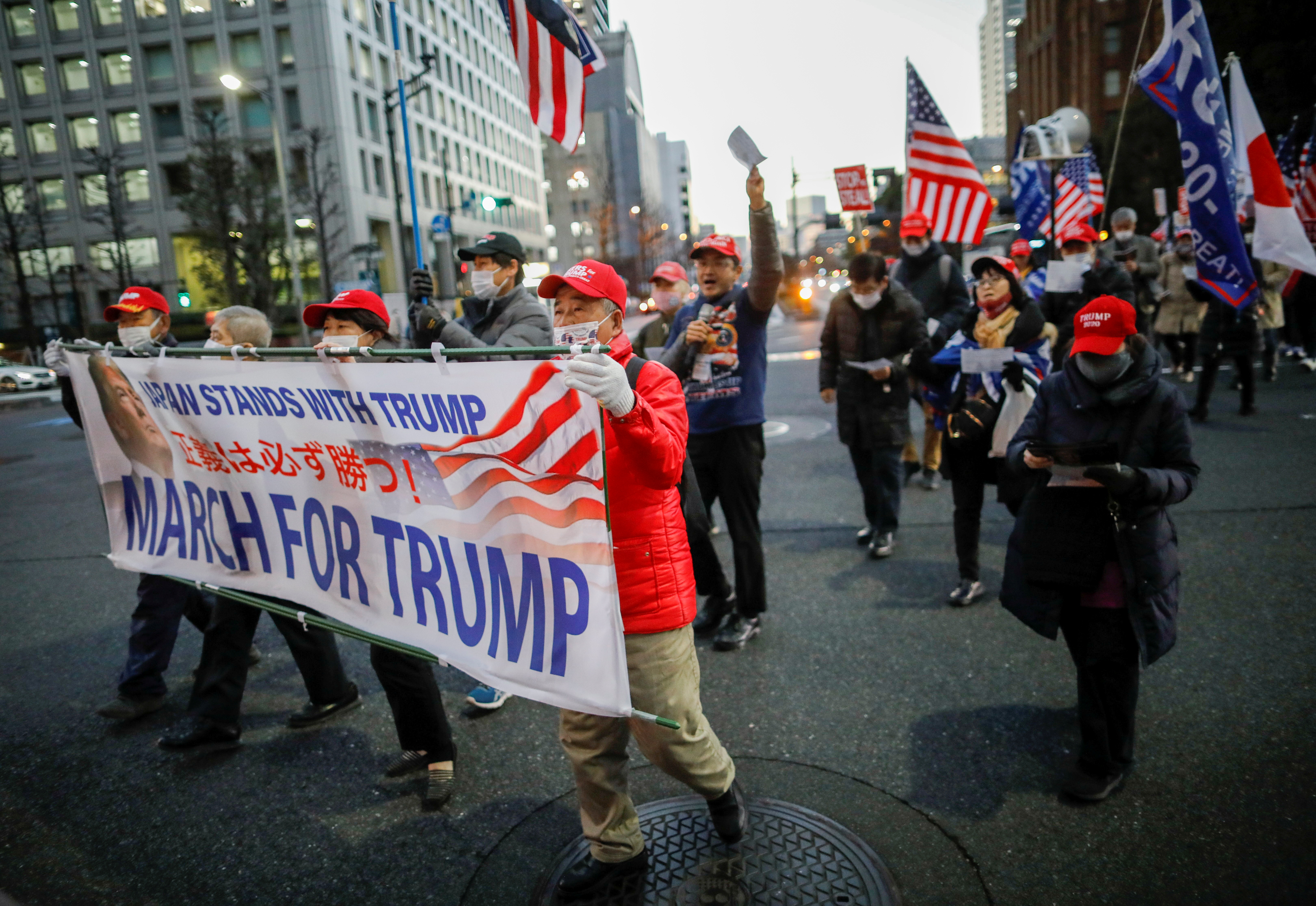 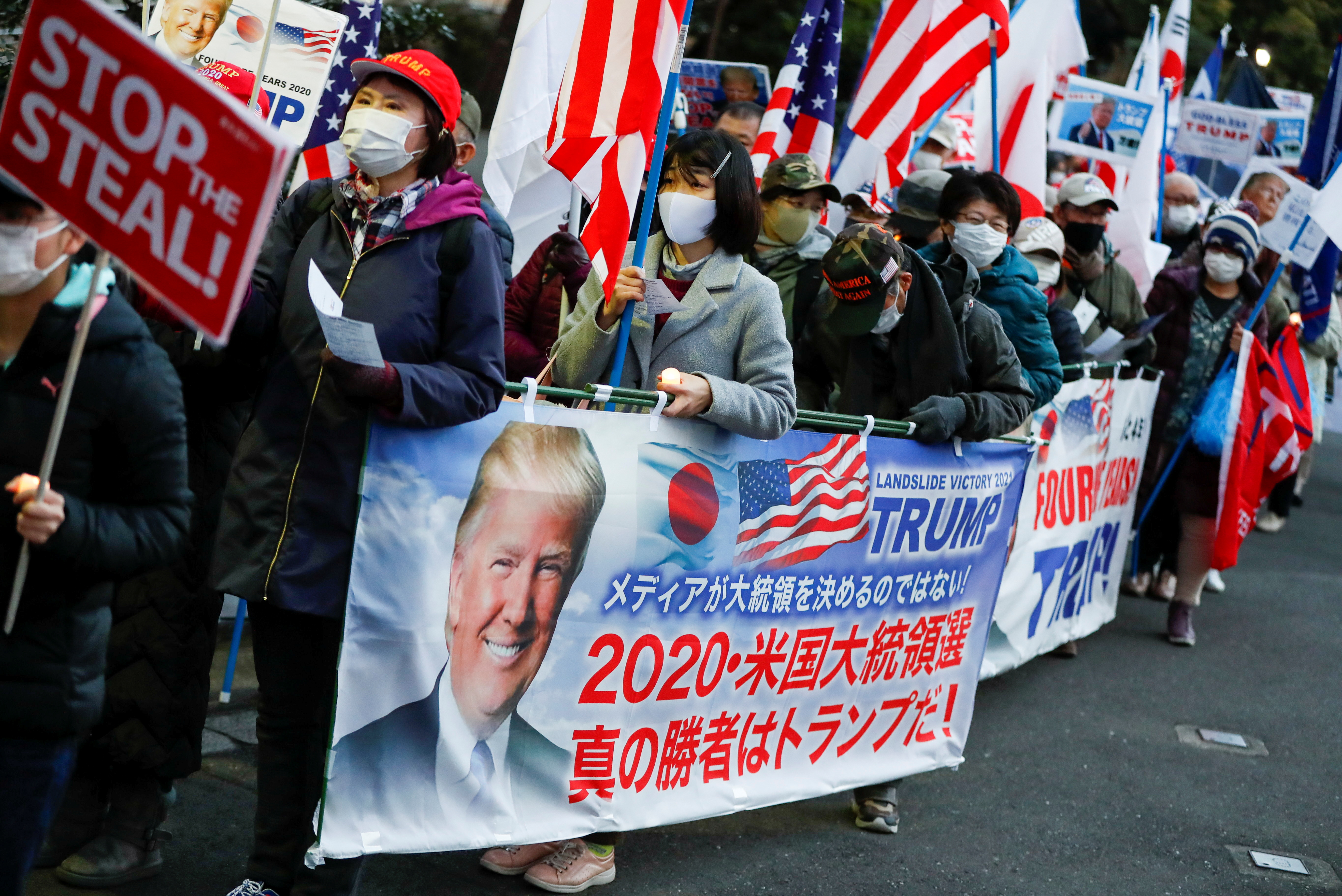 But Dame Karen Pierce, the UK's ambassador to the US, said other Western countries may miss the outing president's unpredictable style when it comes to dealing with countries like Russia and China.

She said: "There's certainly something about the predictability, but I wouldn't like to give the impression that unpredictability in foreign policy is universally bad.

"There were certain things about the way President Trump, did business that made it harder for certain quarters, the Russians would be one, to second guess him, and that sometimes has a utility."