Prince Michael of Kent and his wife have been seen attending the mass outdoor picnic Party in the Park at Windsor this afternoon to celebrate the Queen’s Jubilee.

The Queen’s cousin and his wife Princess Michael of Kent were at another Jubilee celebration today after being at the Service of Thanksgiving at St Paul’s Cathedral in London yesterday.

Both were seen talking to members of the public in the grounds at Windsor while they attended the Party in the Park, on the third evening of the four-day Jubilee festivities.

The party had classic cars and entertainment today, all in the magnificent surroundings of the Long Walk.

The Royal Family have been seen across the UK to mark the Queen’s 70th year of her reign. 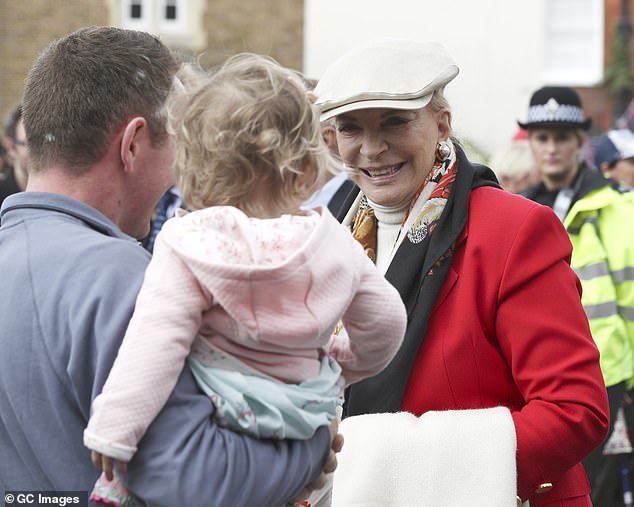 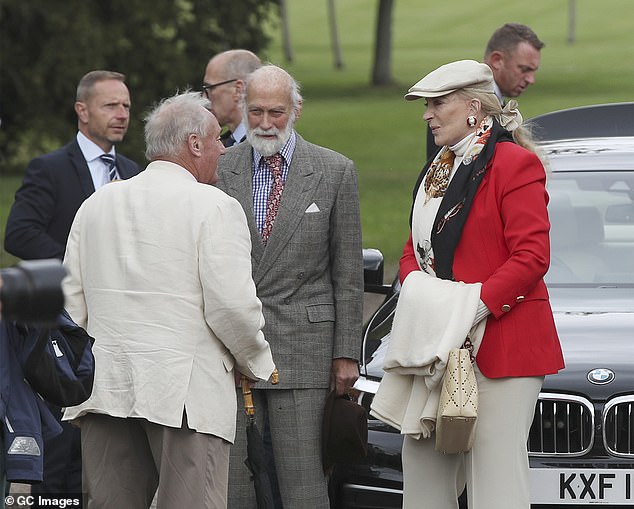 The Queen’s cousin, Prince Michael of Kent, (middle), was snapped supporting her Majesty during today’s Platinum Jubilee celebrations, which he attended with his wife Princess Michael of Kent (right) 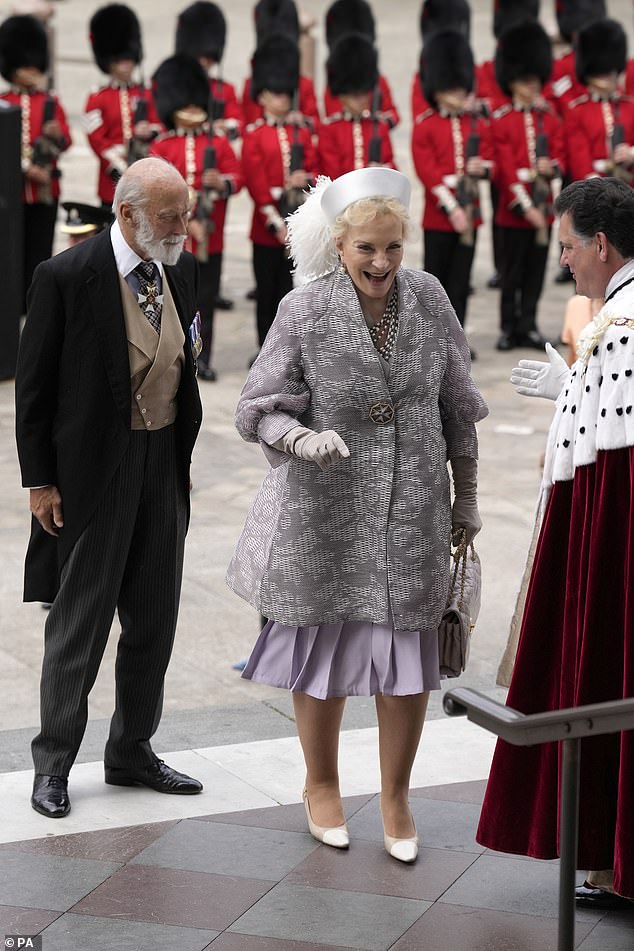 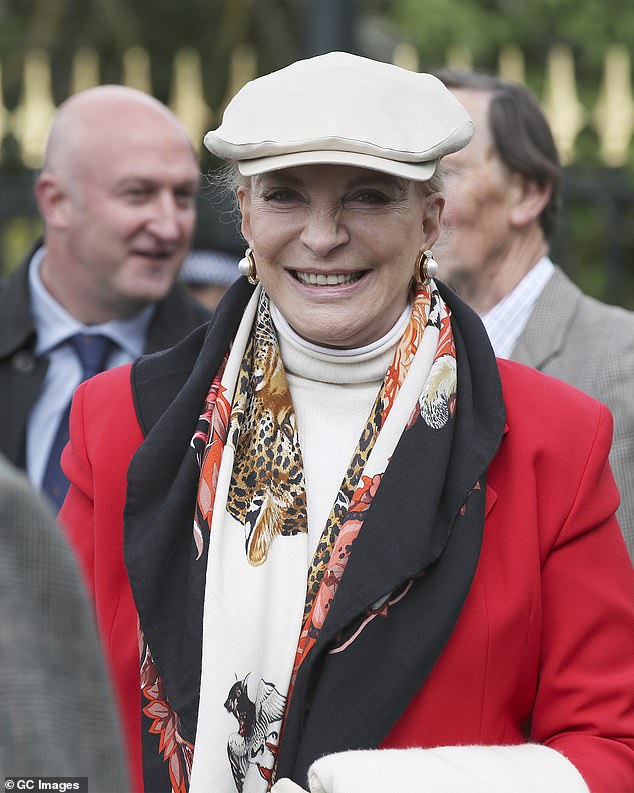 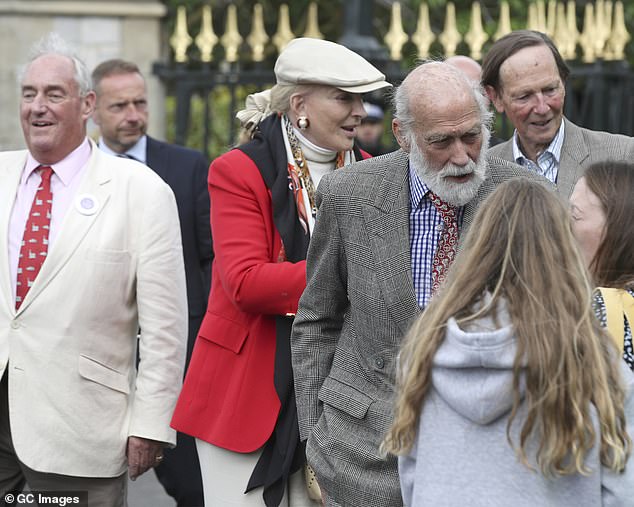 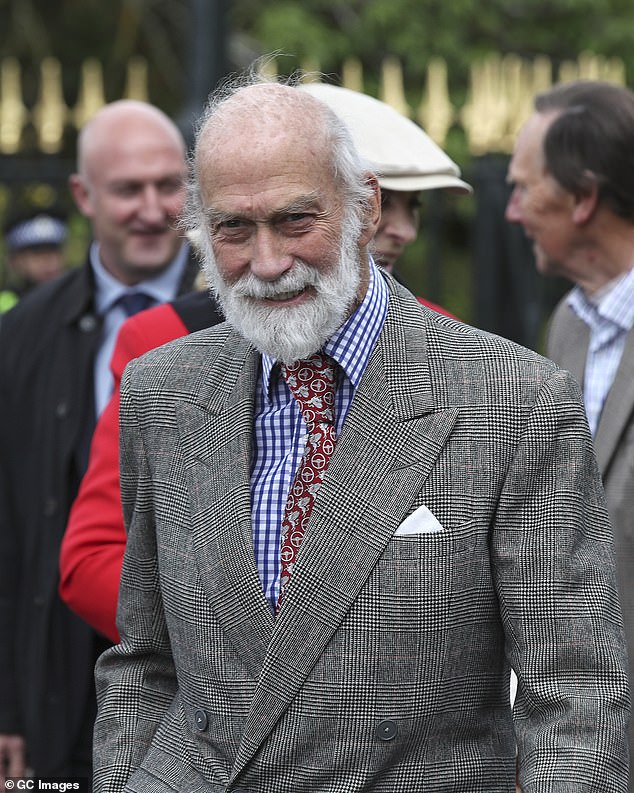 The 79-year-old Prince Michael of Kent is son of Prince George, Duke of Kent, and Princess Marina of Greece and Denmark

By VIVEK CHAUDHARY FOR MAILONLINE

Prince Philip’s beloved cab, which he used to travel incognito around London took centre stage at a classic car rally on Windsor’s Long Walk as part of the Queen’s platinum jubilee celebrations.

The green, gas powered Metrocab was parked just outside the gates of Windsor Castle as thousands braved the unpredictable weather to join in the four days of festivities.

They admired Prince Philip’s immaculately maintained cab and dozens of other vehicles that represented the 70 year span the Queen has been on the throne.

Philip took delivery of the Metrocab in 1999 and used the vehicle for engagements in London, allowing him to travel around the city unnoticed.

The Balmoral green vehicle still bears the same registration plate as when Prince Philip used it, OXT 3. It is owned by the Sandringham Estate.

Prince Philip regularly rode his cab for more than 20 years and particularly enjoyed the fact that it allowed him to avoid London traffic as it could use bus lanes.

After a wet start, the sun broke through as thousands from all over the country thronged the Long Walk.

Musicians performed on a stage and giant screens have also been erected so that revellers can watch tonight’s open air concert.

Sam Sahota, a car enthusiast from West London said: ‘The whole family is here and we’re having a brilliant day, even though the weather’s not been great.

‘It’s amazing to see Prince Philip’s cab. I didn’t know it was his until somebody told me but this is a very unusual piece of Royal history.’

The Duke of Edinburgh owned many other vehicles throughout his lifetime, but none were as unnoticeable as the Metrocab.

He was often snapped driving around in his Land Rover, he even once gave former US President Barrack Obama and his wife Michelle a lift to Windsor Castle.

The Jubilee Picnic in the Park also played host to Prince Philip’s beloved cab, which he used to travel incognito into London.

The green, gas powered Metrocab was parked just outside the gates of Windsor Castle.

The Princes and Princess of Kent also would have seen the cab alongside other vehicles on the Long Walk.

There is also a variety of performances including from Maidenhead Tuneless Choir, Susan Handy Dance, Joanna Henwood Opera, Soul Works, Windsor Rock Choir, Swing and Concert Band throughout the day at Windsor.

The picnic will also broadcast on screens the national Platinum Party at the Palace which is due to start at 8pm outside Buckingham Palace.

Prince William and his father Prince Charles will take centre stage during the BBC open-air show later today in front of a crowd of 22,000 to pay tribute to the Queen during the star-studded concert.

The father and son – both future kings – will speak separately in honour of the monarch.

The Queen is thought not to attend the concert as she missed the Epsom Derby Day today, but is expected to watch from home.

Prince William and Kate were seen earlier today with their children Prince George and Princess Charlotte as they brought the Platinum Jubilee celebrations to Wales today.

The Duke and Duchess of Cambridge, along with George, eight, and Charlotte, seven, met performers and crew involved in a special Platinum Jubilee Celebration Concert in Wales.

Yesterday, the Royal Family turned out in force for the Queen’s Service of Thanksgiving at St Paul’s Cathedral on Friday morning.

The Queen was also not present at this event and was represented at the service by her son.

The Duke and Duchess of Sussex who stepped back from royal duties in March 2020, were seated between Harry’s cousins Princess Beatrice and Princess Eugenie and their respective husbands, and Princess Margaret’s daughter Lady Chatto and her family.

While sitting in front of them were the Duke and Duchess of Cambridge, Prince Edward, Sophie Wessex and Prince Charles and the Duchess of Cornwall.

Prince Michael of Kent, 79, a son of Prince George, Duke of Kent, and Princess Marina of Greece and Denmark is a cousin of the Queen, and sat with the rest of the extended family as less senior Royals behind the working Royals.

His father was brother of the Queen’s father, George VI.

He is involved in around 100 charities and organisations, however he is not a working royal and does not carry out engagements on behalf of his cousin the Queen.

His wife Princess Michael of Kent, 77,  also attendeed the service. She is actively involved in around 45 different charities and organisations, including animal and wildlife trusts and health and welfare charities.

The last part of the Jubilee festivities will be the public celebrating the nation’s longest-reigning monarch with a series of outdoor parties on Sunday. There will also be a Pageant parade finale outside Buckingham Palace.